Via Alpina Summer 2011: Crossing the Alps with a Cause

The Adventure: In mid-June 2011, I will fly to Venice, Italy, and continue by train to the city of Trieste on the Italy/Slovenia border, from where I will begin a 1,000-mile-long traverse across the Alps along the recently established Via Alpina trail network in Italy, Austria, Germany, Lichtenstein, Switzerland, France, and Monaco. Over the course of three months, I plan to ascend approximately 463,000 vertical feet. I will travel east to west, following the Yellow, Red, and Green Trails to maximize my time spent in northern Italy. 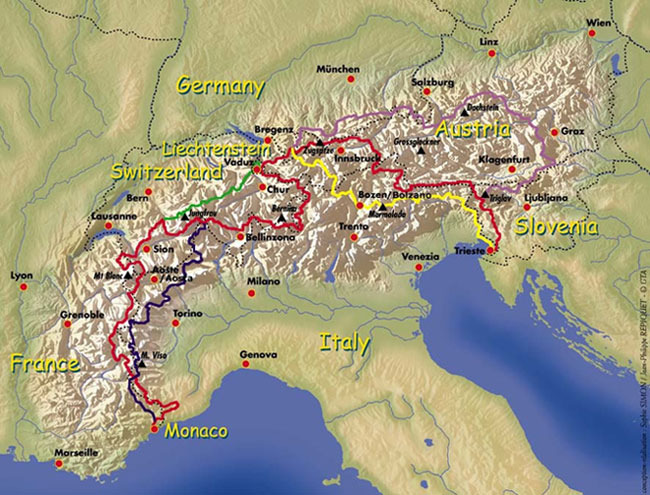 Map provided by the Via Alpina International Secretariat.

The Cause: My thru-hike of the Via Alpina promises to provide a unique set opportunities for me as an outdoor enthusiast, linguist, and scholar. In addition to the privilege of spending three months exploring the Alps on-foot, I look forward to speaking the Italian and French that I studied (and became fluent in) as a student at Stanford University. I have the extraordinary pleasure and privilege of completing the trek in partnership with David Breashears, the famed mountaineer, photographer, and cinematographer who filmed and produced "Storm Over Everest," the first IMAX film to be completed on Everest. Breashears recently founded and currently directs GlacierWorks, a non-profit initiative intended to raise awareness of receding glaciers in the Himalaya and the consequent water-related issues posed to downstream and mountain communities through the juxtaposition of archival photographs of Himalayan glaciers and images snapped by Breashears in Nepal, Tibet, and Pakistan over the past few years. You can view the website for a recent installment of his work here. I will be traversing the Via Alpina as a walking ambassador for GlacierWorks: to raise awareness about Breashears' important work and to engage members of the Alps community with whom I interact in the notion of a global community or "circulatory system" of glaciers. 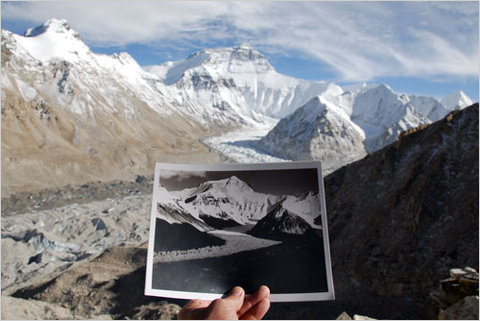 I would like to extend my heartfelt appreciation to David for his support and partnership, and for adding yet another dimension to my journey across the Alps.

Article from the New York Review of Books by Orville Schell.

"On Thinner Ice: Melting Glaciers on the Roof the World": Watch David Breashears in the field for confirmation of why need to be conscious of our glaciers.