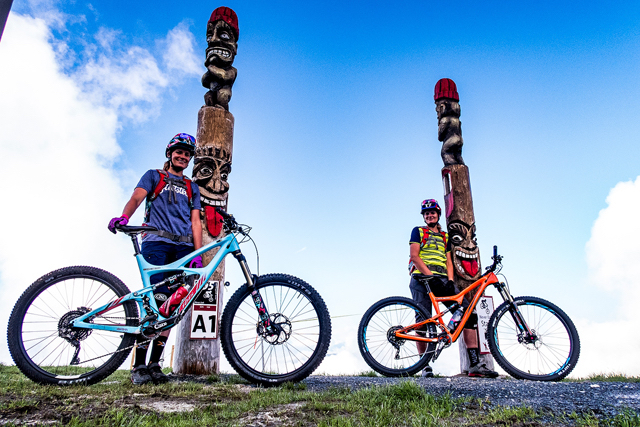 The twins on their IBIS bikes at home in Flims, Switzerland. Sven Martin photo.

Anita and Caro Gehrig are a force to be reckoned with.

The Swiss sisters finished 3rd and 5th overall in this year’s Enduro World Series. The fact that they finished within a few places of each other, and both in the top five, is downright phenomenal.

Sure, they're genetically identical, but still.

Anita also won 2016's Trans-Provence—arguably one of the world's hardest multi-day super enduros, and Caro placed third. They're respected ambassadors of the sport and big players in the elevation of mountain biking.

And what's even better, they're still super down to Earth. It was my privilege to interview and get to know these remarkable racers.

GW: Many mountain bike pros I’ve interviewed had support from parents. Can you tell me a bit about them and your upbringing?

Anita: We were raised in Frasnacht, a little town near Lake of Constance, Switzerland. Our parents always set a great example of a healthy outdoorsy lifestyle. Dad started to ride mountain bikes after stopping an almost pro career in Motocross. 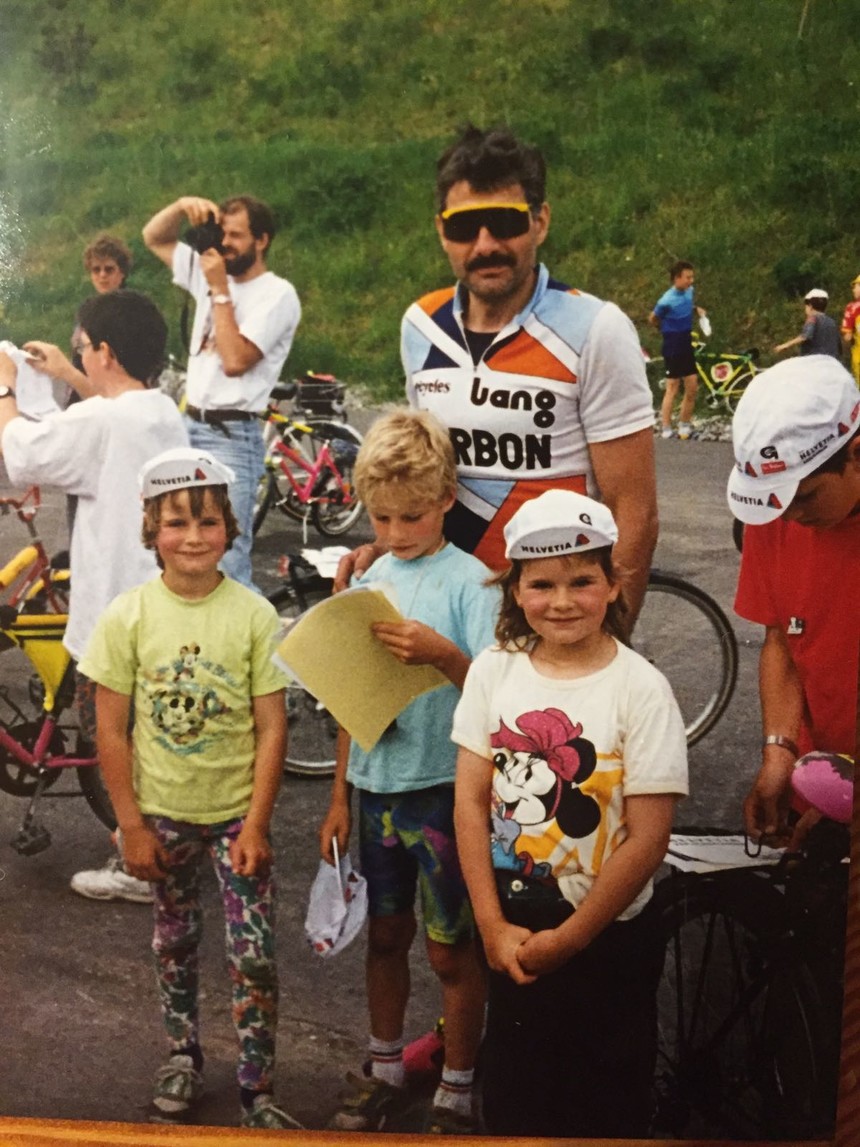 The twins with their 80s moto dad and brother. Gehrig photo.

Our brother Adrian died of cancer when he was 19. He was the one that built up my very first bike. The only wish he had was that we would continue our life with happiness and joy despite the big loss.

We had never ridden mountain bikes together, it’s kind of a coincidence Caro and I got into it professionally and now find so much joy with it. Us living the dream also keeps Adrian's spirit alive.

GW: In one video about your Twins Women's Bike Camps you made the interesting observation that women learn (mountain biking) in a slightly different way when they are among themselves without men around. Can you tell me a little more about this?

Anita: In our hometown in Flims we have many girl riders that shred together. When these groups took in new girls, they just improved so fast. By finding other female riding buddies to shred together beyond the camp weekends, we give even more girls the opportunity to improve their riding this way.

I find many girls lack confidence when riding with guys. Too often they ride with a group where they are always the slowest, weakest rider. So they end up being focused on catching up instead of progressing their riding and trying new things. 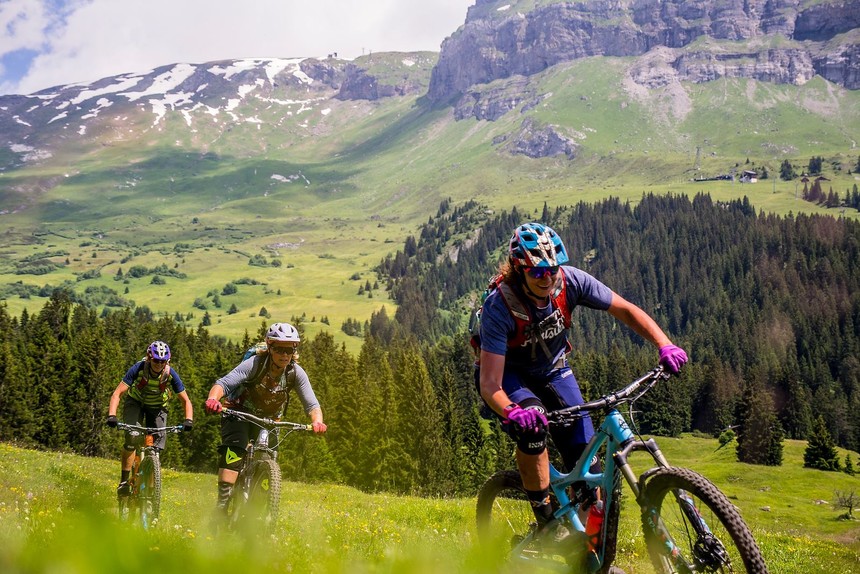 When we coach it’s so cool to see how quickly they build great team spirit and push each other to the next level. Riding in a girl's group probably just gives them the freedom to develop without any pressure from guys.

I guess it’s in our nature that girls often underestimate their abilities whereas guys seem to be confident whether they should be or not. 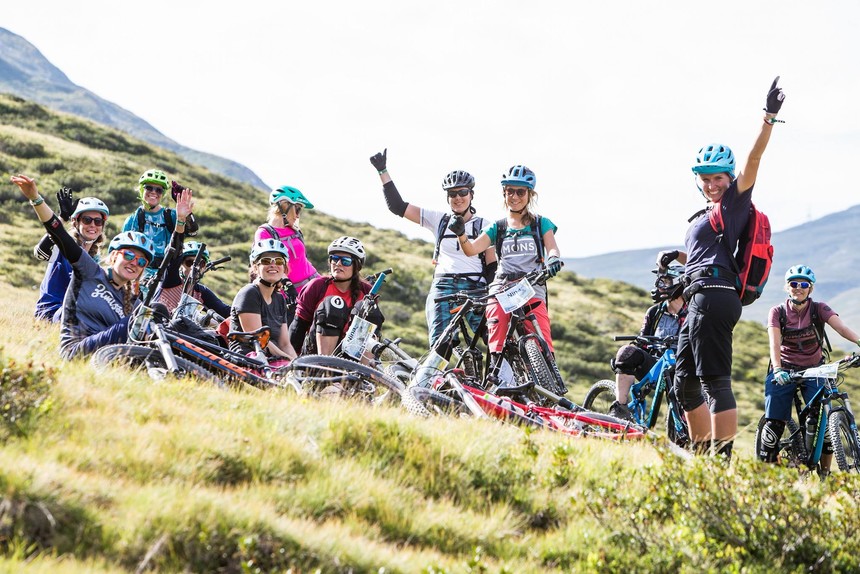 GW: You’ve mentioned how having a sister on tour, sharing that passion for racing, and traveling together is an extra layer of support. Can you tell me a little more about that?

Caro: I think it's a huge advantage for us to have each other. Since we follow the exact same schedule and are training toward the same goals, we always have a training buddy. When Anita has a bad day and the motivation is low I might have a good one and I'll just kick her butt and we'll make the training happen anyways and the other way around. 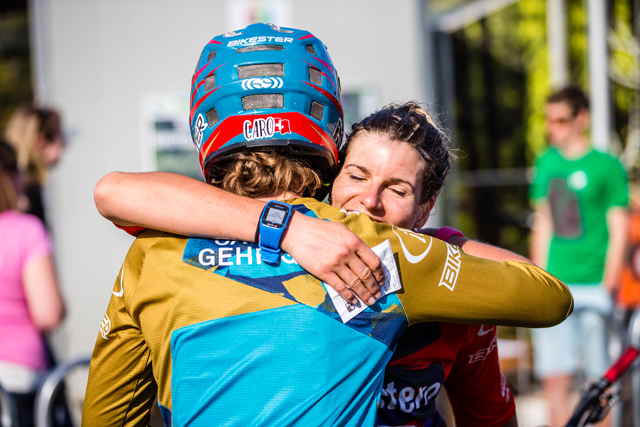 At the EWS in Ireland. Matt Wragg photo.

When traveling together, we have pretty much the same interests and ideas of how we want things to be, so things flow naturally and we don't have to decide what's best to do in big discussions.

Same goes for the racing, we know how our preparation and mindset needs to be so we try to get each other there. If we both know before a race "okay we're going to be good here" and we get super hyped, only the two of us could handle each other! We get pretty crazy then, but it's a good laugh.

The best moment was definitely to celebrate Anita's first EWS Podium in Aspen this year, seeing all the hard work pay off and the big relief and motivation that came with it was an unreal feeling. 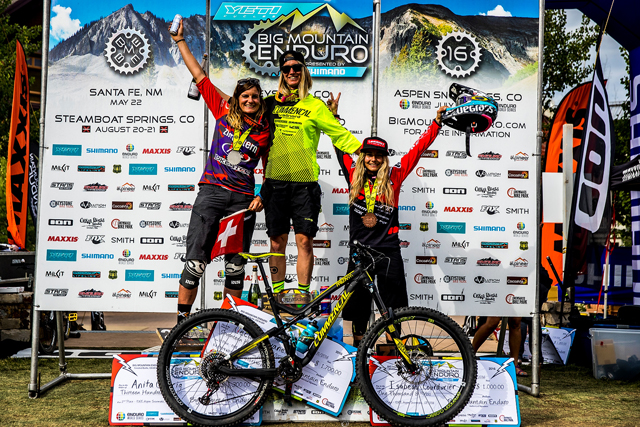 Anita on the podium at Aspen/Snowmass. Sven Martin photo.

Our dream is to stand on that box together at some point, that’s for sure. Twin double podiums are the best!

But don't think it's always peace and flowers when we're together. Since we know each other so well, we can be way too honest with each other. What you would never tell your best friend straight into the face, you'd always do so with a sibling especially if it's your twin.

Things escalate quickly and heated conversations can happen, but fortunately they always cool down swiftly too. Our friends think it's funny to see us fight.

GW: You mentioned that starting together can be a benefit in mass start races. Do you guys have a two-person blocking or passing strategy for those?

Anita: We would try to take the lead immediately, of course. The one in the back tries to make sure no one can overtake and gives the one in front the opportunity to get away. 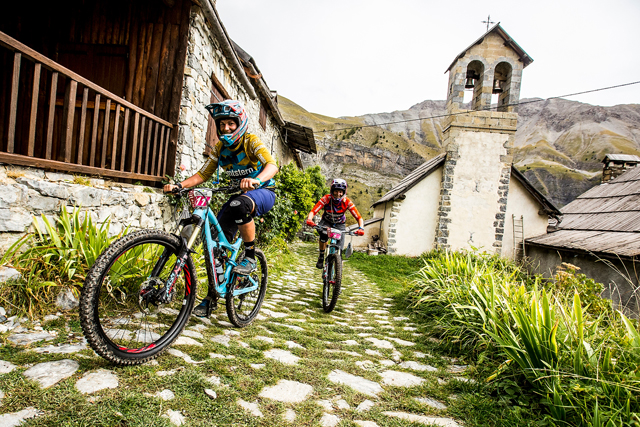 Riding together at EWS Valberg (not in a timed section). Sven Martin photo.

Though there is a fight between the two of us every race. If riding together, attacks will surely follow, but we would never do a too risky overtaking maneuver with each other.

GW: You’ve mentioned Anita is technically stronger on steep, gnarly sections but Caro is more courageous. Does that also mean your race strategies are slightly different?

Anita: When it comes to jumps and such, I’m never the one to do it first. So I would count on Caro to go ahead and tow me in. I think our strengths complement really well. It’s awesome for us to always have a riding buddy at the same level. 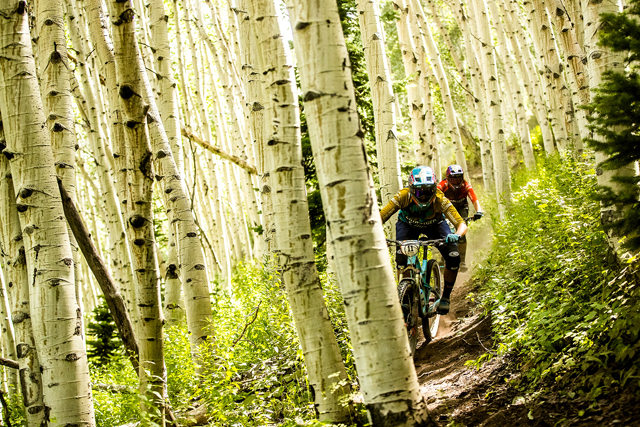 Our race strategies don’t differ as we have similar physical strengths. For Caro, losing seconds here and there while racing is mostly a mental thing. She's had a lot more bad luck with injuries in the past and has been working through that.

Seems like she’s pretty much done with that, she is hot on my heels now. Maybe have to put in some secret training this winter to keep her distant...

GW: Is there something about long and challenging events like Enduros that appeal to you both?

Caro: Yeah, definitely. We like the long and challenging Enduro events. We're some of the fittest girls in our discipline and we're not unhappy if the races are physical. Even though we don't particularly like it, we just know it's maybe an advantage for us. That being said I still kind of prefer one day EWS races. 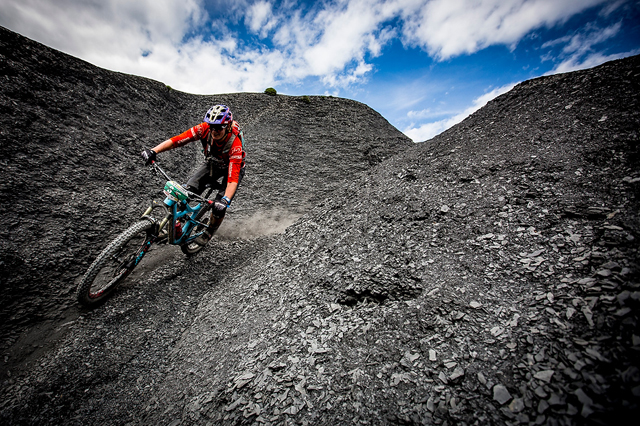 Do both of you have a similar mental preparation before a race? If not, how does it differ?

Anita: Our preparation is pretty similar. Caro likes to amp herself up with buzzing music to clear her mind. I don’t do it with music but definitely try to have my thoughts on the track ahead of me.

A little bit of anger in the stomach does help too. It gives me the extra grit. Right after an unsatisfying stage I often have the best stage results, it’s just about transforming anger into power. 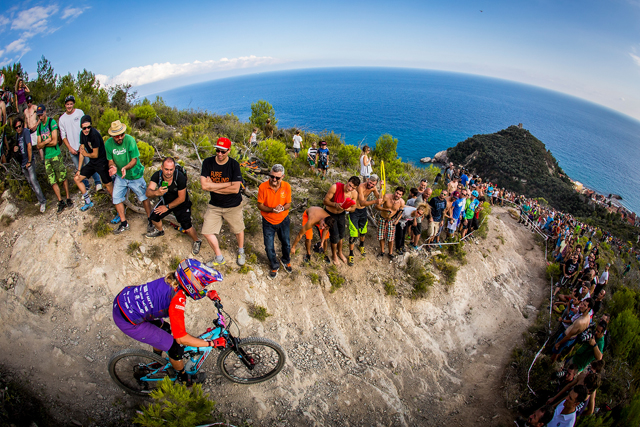 Have you made changes over the last few years to your race style or training to adapt to the sport’s changes?

Caro: The Enduro discipline is still relatively new, but the fourth year of the EWS was a lot more demanding compared to earlier years.

This made it possible for us to raise our game to the next level. It also wouldn't have been possible without the help of our coach Tobi, who pushed us way past our comfort zone. But we just seem to grow from the challenges. 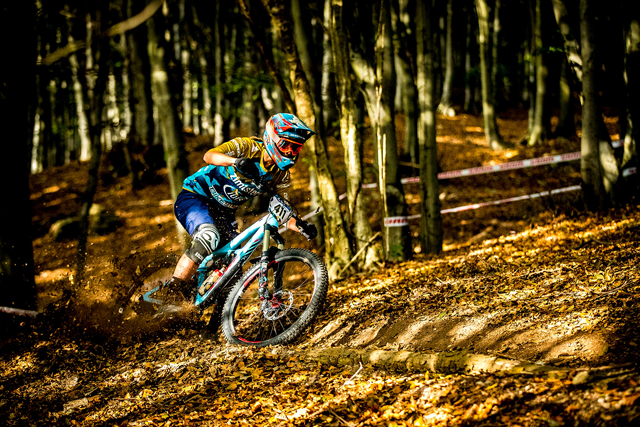 Caro: Our winter training looks a bit different than you might think. Since we live near a ski resort we spend a lot of time training on the snow and don't touch our bikes for several weeks. we train five or six days a week with one to three days in gym and XC skiing, yoga, rock climbing, running, skiing, and snowboarding for the other two or three days. 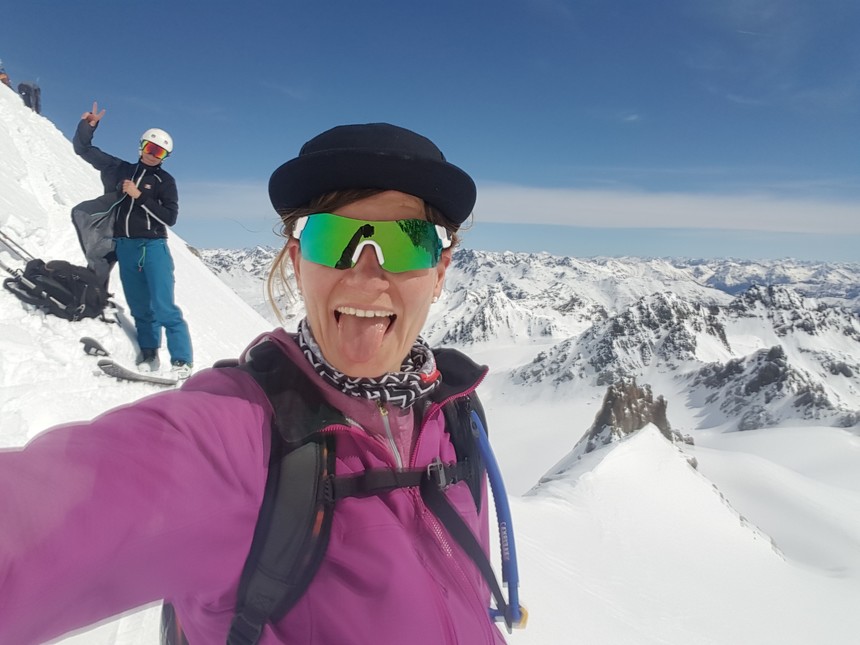 Most of our base training last winter we spent on big ski touring missions, which is way more enjoyable than spending hours and hours on the turbo trainer in front of the TV. It works for us and keeps us happy and motivated.

Closer to race season we spend more and more hours on the bike to get back up to speed and be comfortable of course. 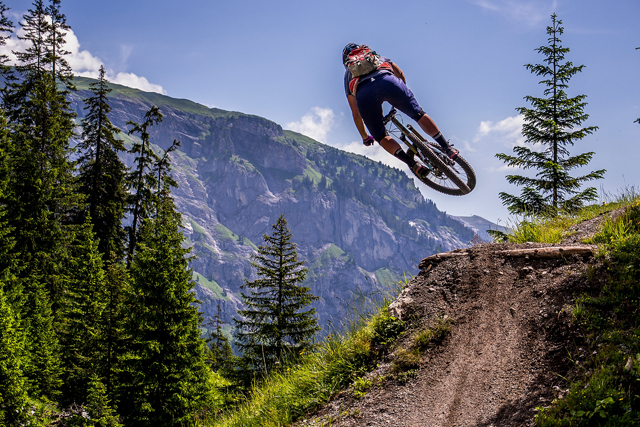 Back on the bike in their hometown of Flims. Sven Martin photo.

We’d love to hear your thoughts on equipment and bikes. How do you like the IBIS MojoHD?

Anita: The Ibis HD3 was love at first sight for us. The very first ride already felt great, although we have been switching from a monster truck like 29er to the 27.5 Ibis. It handles great and is very capable, just what we need for the demanding EWS tracks. 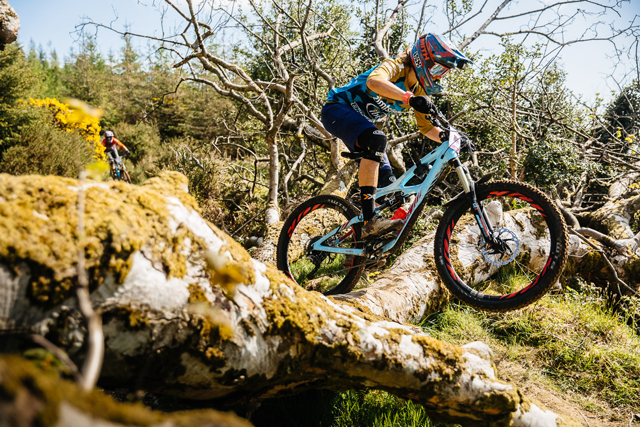 How is your role, or that of any athlete in mountain biking, different now than it was a few years ago? Have your media responsibilities changed? How do you adapt to that?

Anita: I think the role of an athlete has definitely changed. It’s not enough anymore to only deliver results. The importance of social media has increased. But it’s easy to let other people take part in your life as an athlete as we always travel to those amazing places. 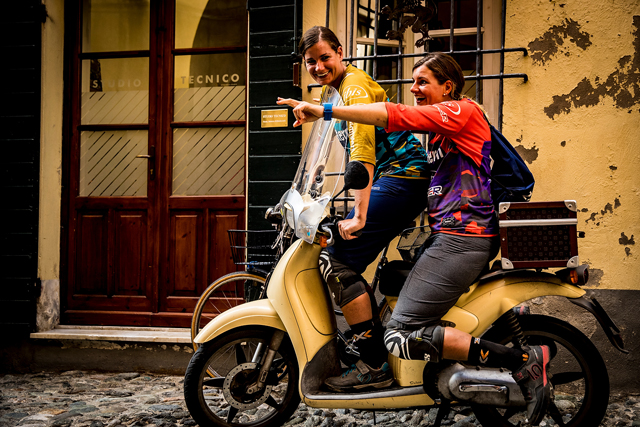 They get to share those places with us. Sven Martin photo.

Personally I think social media has become a bit too important in sports and sponsorship in general. Especially female athletes that create big followings with a sexy approach. Keeping it real is our answer to that.

You both seem incredibly professional and focused, but does anything else interest/intrigue you besides cycling?

Caro: (laughs) I hope we don't seem too professional and focused to be honest. Everyone that knows us a bit better knows that for us riding bikes is just a lot of fun. Of course we want to be good at it. But it wouldn't be too much fun if it would only be result driven. 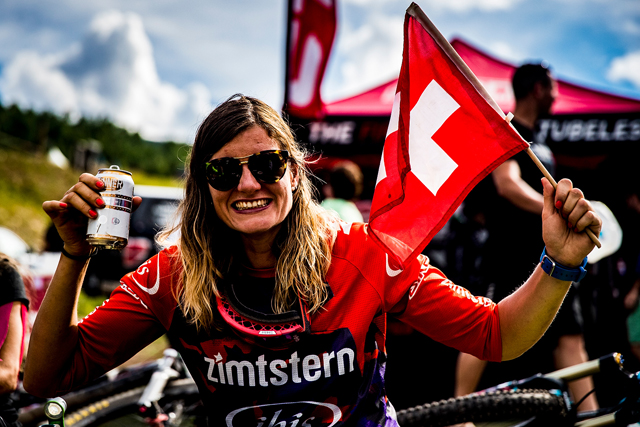 Quite possibly the best photo ever. Sven Martin photo.

We know that we have to put the work in to be successful but also like to hang out with our friends and have some fun along the way. We both have a big passion about coffee and cooking and like to host a good dinner party. Secretly, we're stealing all the good ideas in coffee shops worldwide and might open our own restaurant sometime. 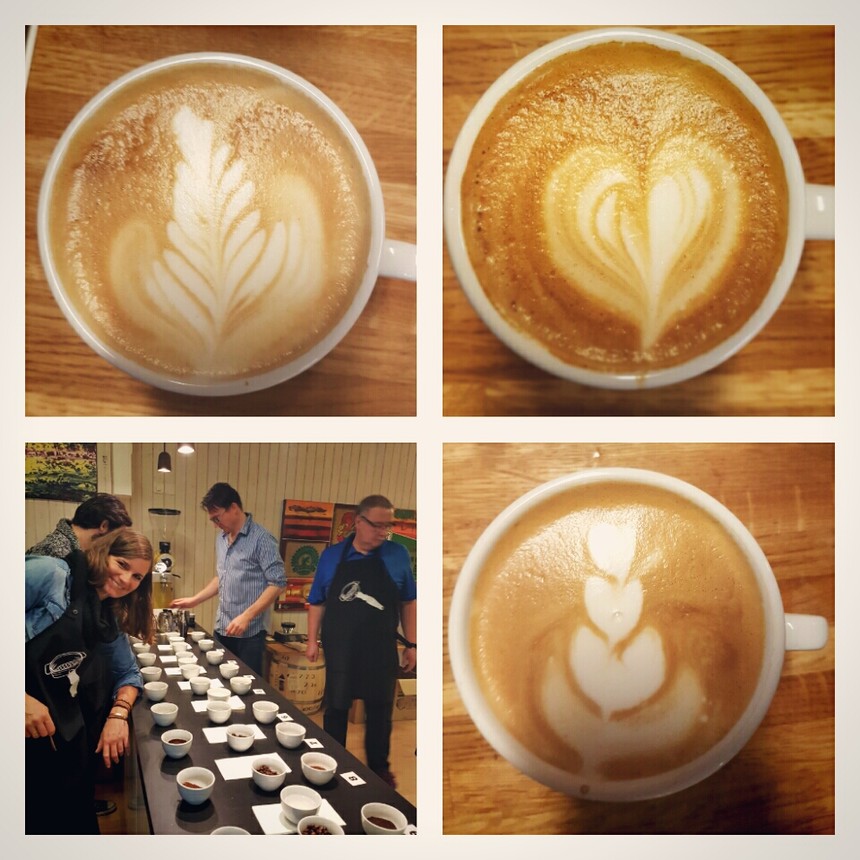 Besides that we’re generally very active people and like to spend a lot of time in the outdoors, skiing, hiking, whatever is on.

Do you prefer fancy chocolate or Callier from Migros?