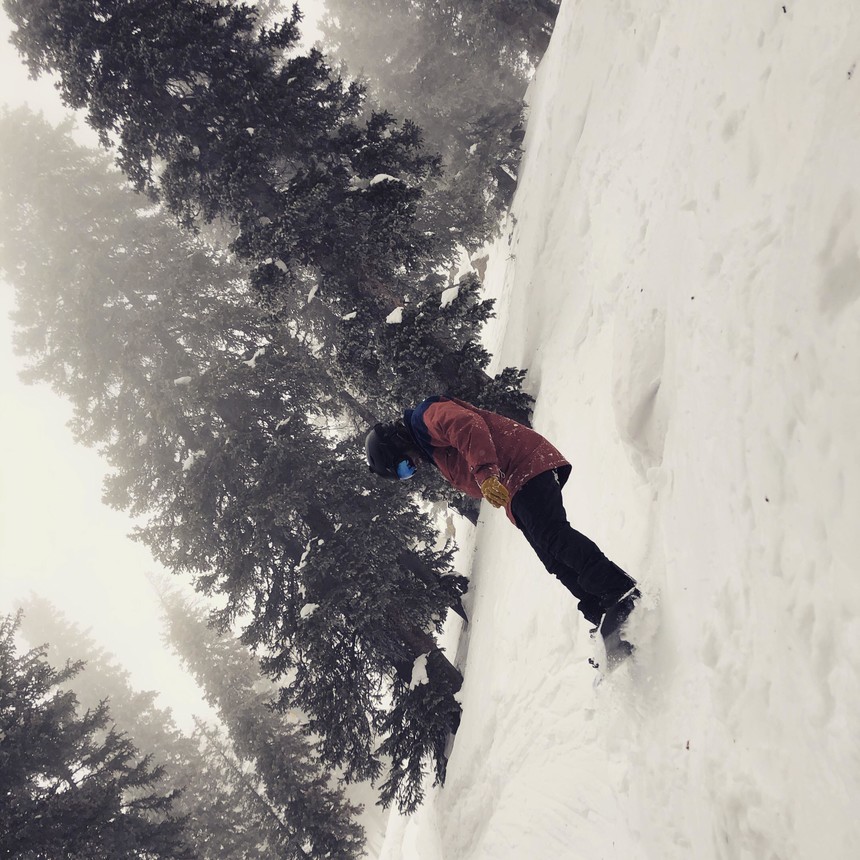 Originating along the East Coast, I grew to know the runs of my local resorts like Michiganders know where to point to their towns on their hands. I knew where the best pow stashes were and the best runs to sweep to avoid the crowds. It was all very familiar. Now that I've moved to the American Southwest, everything is new and for the first time in a long time, I was intimidated. And it felt AMAZING.

We took Highline Ridge up from Lift 2 and got so stoked we dropped in down Blitz, one of the first tree runs on the right off the hike-to area. The stoke was one thing, adrenaline another, and then there was the intimidation. "Holy Trees of Columbus!" I said while I strapped in regular. I scooched down a bit on my butt and stood up feeling wonky. It was like I was standing in a slanted snow globe and the trees were growing out of the ground crooked.

I had become pretty confident in making turns from heel to toe but had never ridden between trees this close and steep at the same time.

Dude this is so rad.

We bro-talked our way down our first steep of Taos Ski Valley. I'm not sure if we hung on our back edges the whole way down, zig-zagged from reg to goofy, or ever even turned the board nose down, but I was high in the clouds and really digging some new, unpredictable terrain. 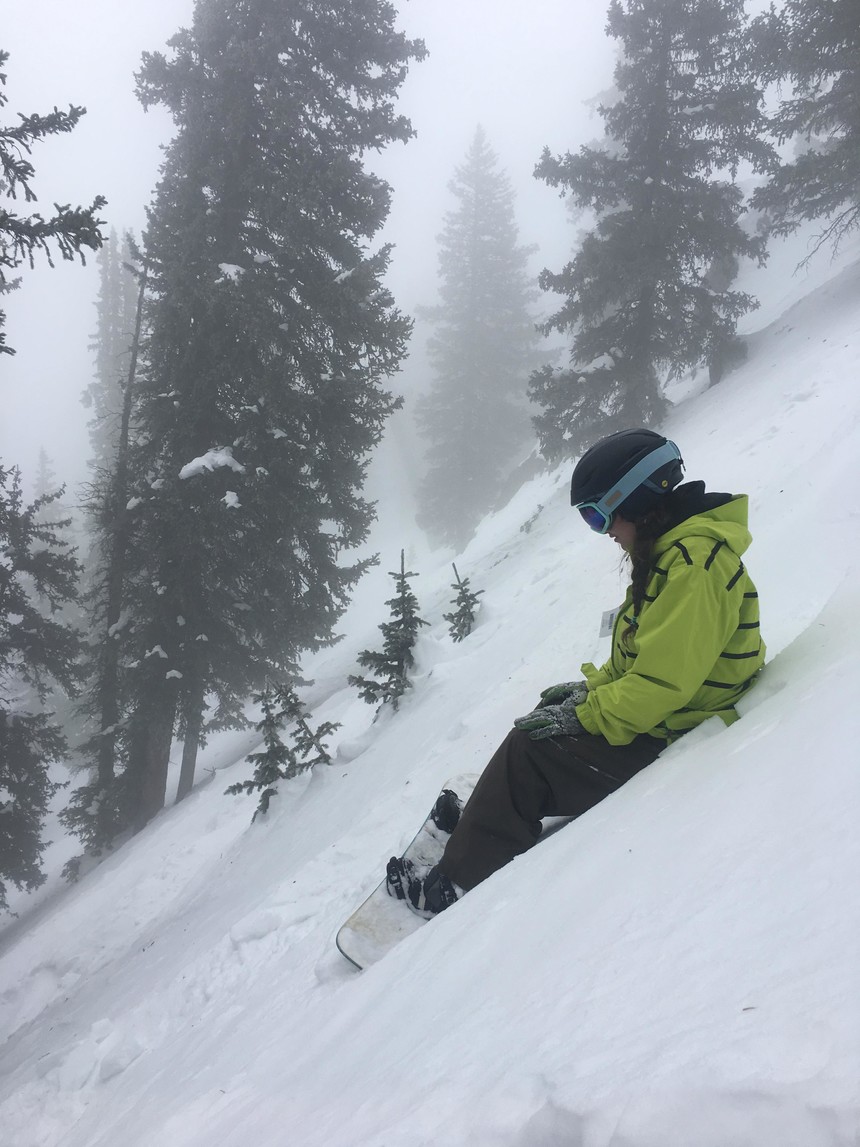 My ticket flapped in the breeze on the front of my Jackson Hole yardsale jacket that I scored last summer for 10 bucks. I didn't care that I may come across as a washed up gaper or that my pants were baggier than Russet potatoes. All of my focus was on the steeps in front of me and which turns would lead me down the mountain ahead.

We somehow neared the bottom of the treeline, and visibility was zero to none. Other mountain scramblers whipped by without being seen in a blur of James Bond and ski poles. We had no idea where we were on the mountain at this point and loved every second making our way down new tracks.

We had come up to TSV after a bit of rain, so the snow was meaty okra on this certain day, and powder was still lurking where you worked for it. So we made our way back to Lift 2 with cravings of more hike-to steepage. We walked passed Blitz and huffed and puffed up the boot tracks. Took a short break to breathe and met a super friendly local who gave some tips on which runs to take further up the ridge.

We walked up to the turnoff and once more were overcame with stoke. We took the first run we saw, because it looked plain badass. Hidalgo. It was my first double-black, ever. We were in the clouds, couldn't have seen a damned neon beer sign if it had been flashing free beverages right in front of our eyes. The 3- 4 foot ledge that drops into Hidalgo was enticing and downright scary. It seemed as though you could leap straight through the clouds and encounter Zeus himself. I wanted to pee my pants with excitement. 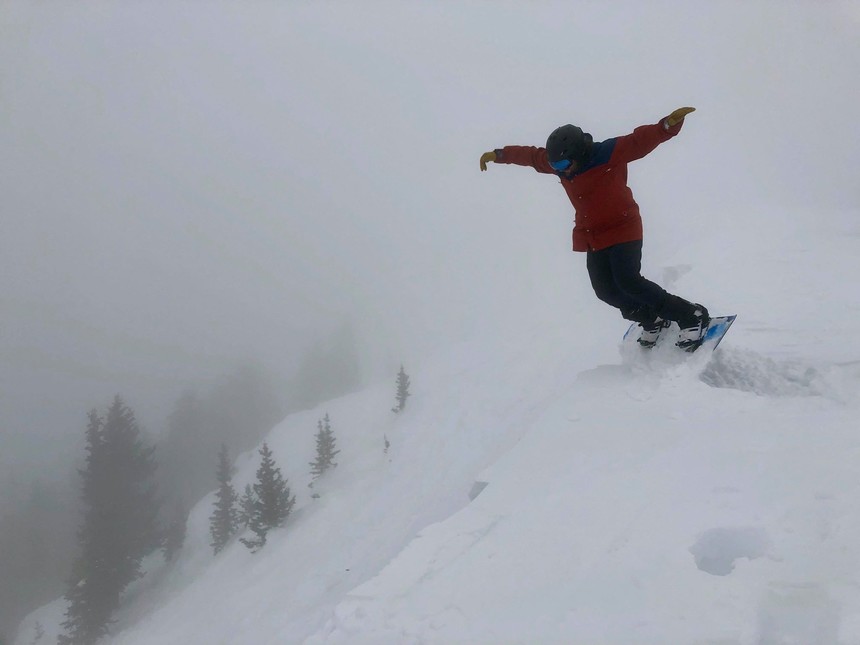 It was a fluffy-ish landing and one to ignite a flame for the steeps of TSV. We shook off the good chills and rode out the fog to the groomers. There ain't nothing like meeting trails for the first time, though it is a marvelous feeling to get familiar with the curves of a mountain.

We rode down around the back, hooked a few turns, and slid down a black to end up at the Bavarian Lodge , AKA: Pretzel Heaven. After a morning in the steeps, pretzels were much needed to refuel the stoke-o-meter.

Taos kicked our butts, and there is still so much left to explore. Gaggles of small children took turns ripping down the mountain. And we trailed not far behind, deciding that we'd be back for more. The steeps had sucked us in.

The vibes on this big hill are pretty welcoming with the ski chair circles around the warm heat of firepits, beer in mugs, and shared levels of stoke from snow-lovers around the world.

"Bruh, what was your favorite part about the day?"

Definitely the dude on the chairlift, slamming a Tecate. He brought the stoke with him, and it all started with a story.