Accomplished Swedish ski mountaineer Fredrik Ericsson was killed early this morning in a 1,000-meter fall on the upper reaches of K2, the world’s second tallest peak, 8,611 meters, in Pakistan, TetonGravity.com has confirmed.

Ericsson was ascending through a steep couloir, “The Bottleneck,” at approximately 8,300 meters, with the Austrian climber Gerlinde Kaltenbrunner when the fall occurred, according to a written statement by David Schipper, a friend of Ericsson’s who has been updating fredrikericsson.com stateside via satellite phone dispatches from the climbers. 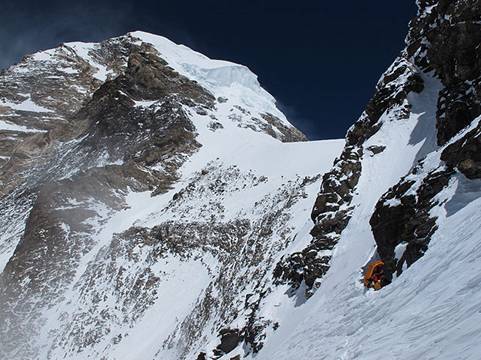 A photo of Camp 4 on the Cesan Route, from Fred’s website. The Bottleneck is the gulley leading up to the rock-outcrop, just below the nasty hanging serac. the "traverse" section of the route then heads out and left, just under the serac, and the summit is actually the back right point (fredrikericsson.com).

“At about 1:30 AM Trey [Cook], Gerlinde and Fredrik left Camp 4 at about 8000 meters to move to the summit,” Schipper wrote in the statement. “The weather was less than the good forecast but it was also supposed to improve during the upcoming day. Fabrizio [Zangrilli] and a few other climbers elected to remain in Camp 4 to see what happened with the weather."

“Several hours later, as the three climbers reached the base of the Bottleneck, Trey decided to return to Camp 4. He arrived back at about 5:30 a.m. in low visibility and high winds.”

“According to the conversation Fabrizio had with Gerlinde, Fredrik was fixing rope to the rock in the Bottleneck above her when he lost purchase and was unable to arrest his fall. This happened some time between 7 and 8 a.m. Later it was determined he fell about 1000 meters and did not survive.”

Since no climbers have summited K2 this season, or ascended through the Bottleneck, fixed ropes were not in place up high. 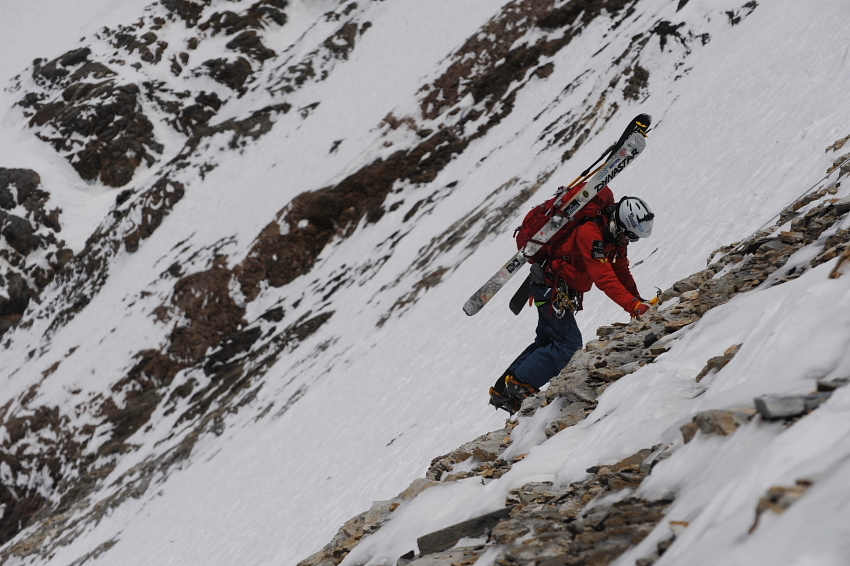 Ericsson, on the slopes of K2 earlier in the expedition (fredrikericsson.com).

After Ericsson’s fall, Gerlinde Kaltenbrunner turned around and safely retreated to Camp 4, “aided by climbers [who] had stayed at camp,” according to Schipper. Gerlinde later descended to camp 2, at 6400 meters, by 7 p.m. K2 time.

Due to the precarious location of Ericsson’s body, according to Schipper, recovery would be dangerous if even feasible; Ericsson’s parents later requested that it be left there, at approximately 7,000 meters.

News of the accident reached Dave Watson, a friend of Ericsson’s, this morning in Jackson, Wyo. Watson skied the Bottleneck section last year, Aug. 4, during his own Ski K2 project; Ericsson was attempting to be the first to complete an entire descent of the peak.

F---ing horrible,” Watson said in an interview today. “It’s one of those things -- you know it’s always a possibility, but you just hope to never have that fear realized.”

Watson first met Ericsson last year at a hotel in Islamabad, Pakistan, as Ericsson was escorting the body of Michelle Fait – Ericsson’s partner on K2 last summer who was killed in a fall while skiing on the mountain’s lower flanks – and Watson was heading toward basecamp for his own attempt.

“He definitely had a presence, but it wasn’t outspoken or anything like that; he was really smiley and you knew just by talking to him and the questions he asked that he was solid in skills and solid in his mind,” said Watson. “It’s not like I worried about him; I didn’t. I knew he was gonna do what he could up there, and he’d been on a lot of big mountains and he was still alive.”

“Sweet guy too, he was always asking about family and always had something good to say about everyone. Really handsome too, super fit, he wasn’t somebody who went unnoticed. And just the fact that he was trying to ski down a mountain like K2, that put him in a different league. There’s so many rad skiers out there, but looking at K2 and in a way to ski top to bottom so he’d be way off route and far from help, and knowing that he was going to have to do it alone… I mean, just climbing K2 is hard, but when you end up trying a fringe project like this you sometimes have to do it alone.”

“This game has serious consequences and there’s no in between. It is either ultimate success, by completing the project; or feeling failure that you didn’t send it; or you don’t come home.”

Early this morning I was woken by a call from Trey's girlfriend. 'Frippe was killed...

The bottom of my world fell out. Facts and information are impossibly inaccurate at this altitude so I got started making my way through the grim channels to find out where the truth was. With the help of Field Touring Alpine and my friend and guide Fabrizio Zangrilli I was able to get most of the story straight.

Some of what he reported was first hand knowledge while at camp 4 and part was from his conversation with Gerlinde Kaltenbrunner who was with Fredrik when he fell.

At about 1:30 AM Trey, Gerlinde and Fredrik left camp 4 at about 8000m to move to the summit. The weather was less than the good forecast but it was also supposed to improve during the upcoming day. Fabrizio and a few other climbers elected to remain in camp 4 to see what happened with the weather.

Several hours later, as the three climbers reached the base of the bottle neck, Trey decided to return to camp 4. He arrived back at about 5:30 AM in low visibility and high winds.

According to the conversation Fabrizio had with Gerlinde, Fredrik was fixing rope to the rock in the bottle neck above her when he lost purchase and was unable to arrest his fall. This happened some time between 7 and 8 AM. Later it was determined he fell about 1000m and did not survive.

Weather was said to become more challenging as time passed and Gerlinde's safe return to camp 4 was aided by climbers that had stayed at camp 4.

By evening of that same day the remaining climbers made their way back to camp 3 at 7000m. All the tents left at 3 were 'thoroughly ruined' by rock fall and ruck sacks were needed as shields from the constant rain of rocks. Gerlinde reportedly continued down to camp 2 at about 6400m. All will make their way to base camp tomorrow with the hopes the colder night temperatures will reduce rock fall. They will be safe when they are at basecamp.

It is almost impossible to get the facts straight in these situations as each version is a blend of facts and perspective. It is also difficult to understand the situation without being there. I give my most sincere condolences to Frippe's parents, family and friends. I have no words to express my sorrow. This information in an effort to help you understand the details - though they can only tell part of the story. Everyone I have had contact with, both on K2 and off, said he was liked by everyone at base camp, that he brought a positive atmosphere everywhere he went.

You will be missed, Fredrik by all of us fortunate enough to have known you. I will remember you with the memory of beautiful Chogolisa in the background.

Frippe's body is resting at about 7000m. His parents have requested it remain in the mountains he loved.

Retrieval would be exceptionally dangerous.