We eventually managed to leave Bariloche after a lot of back and forth regarding sharing rides and renting cars, as well as more beers, chocolate and an asado at Jorge's. We knew we would arrive in Chalten just after an unusually long string of nice, windless days, but what can you do.

Sunset and the promised land. 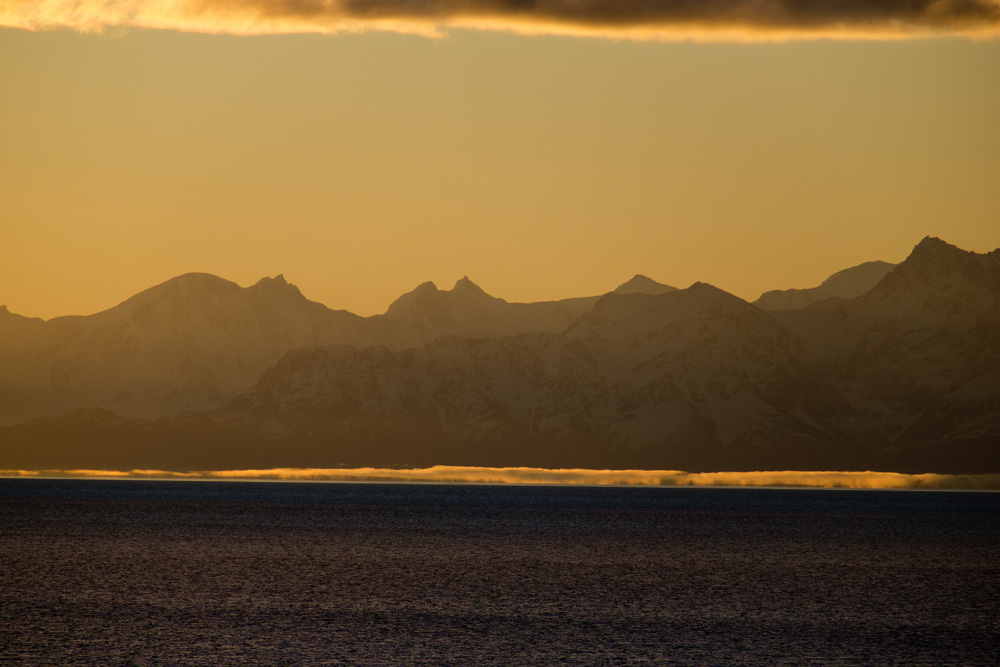 In Chaltén we stayed at Pioneros del Valle Hostel, where we were mostly alone with the owners. For evening entertainment there is a channel dedicated to action movies in historical settings.

The Mummy - evil Asian samurai king cursed by witch for good reason, then resurrected by stupid British man or maybe Nazis. Showdown in mountainous terrain with artificial snow, gang of yetis save the good guys. No flutes!

Sparta? - only caught the last few minutes. Howling flute music announces bloodshed. Not sure if real movie or parody.

With a forecast of a few days of "medium bad" and then "super shit" weather (quoting Jacob), we made an effort to get out regardless and visited the usual spots suitable for medium bad weather.


We spent half an hour watching four condors watching us, circling overhead. 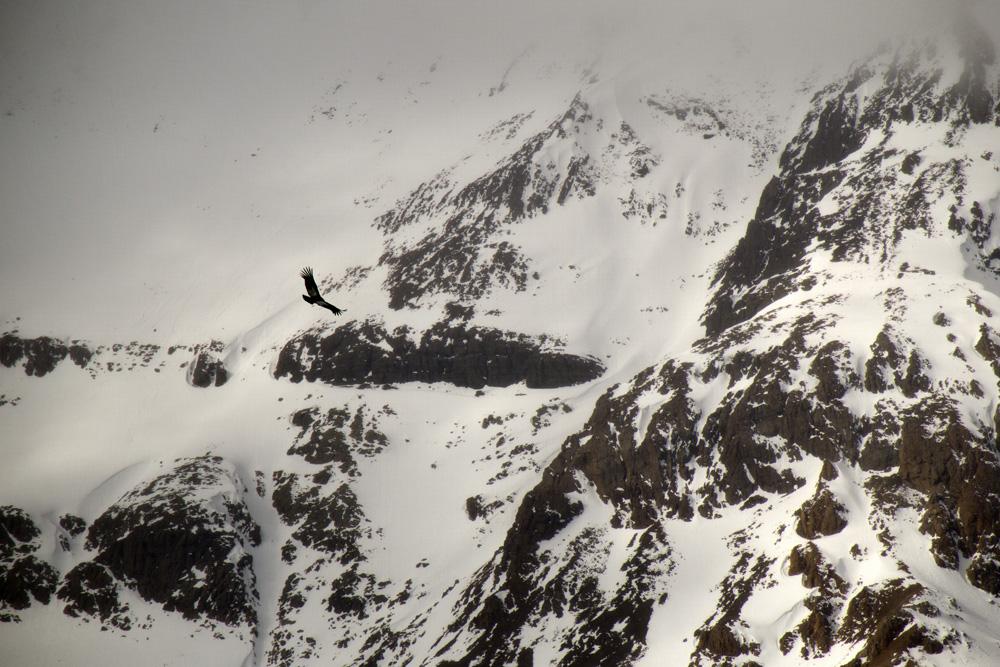 Then it was back to walking. 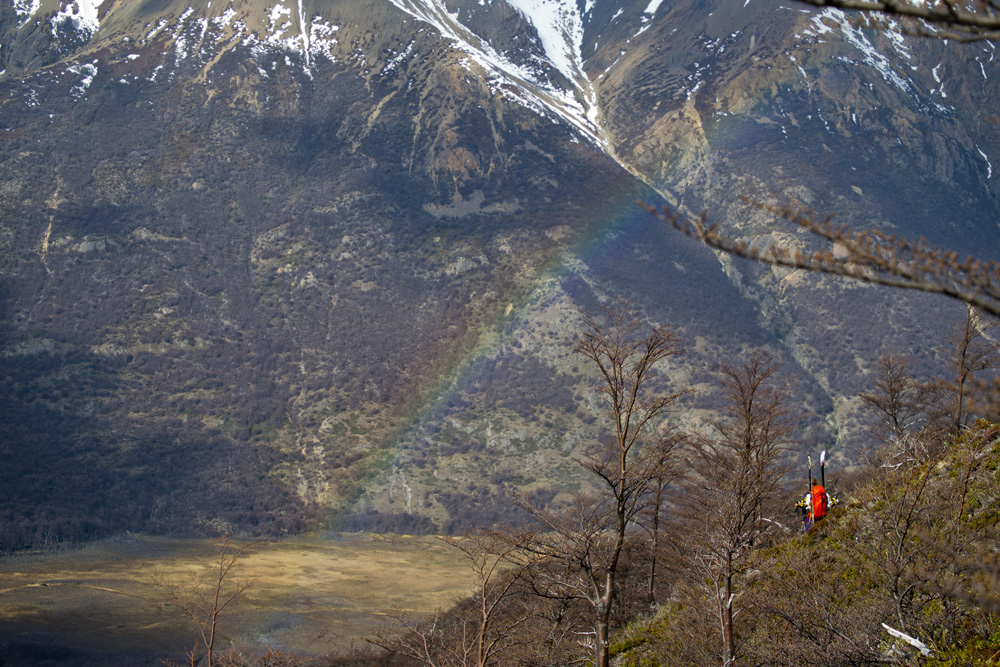 Maybe we should have stayed in bed today?


On a day that looked a little better than medium bad we decided to enjoy a slightly longer forest walk. We had some fairly elaborate plan that unsurprisingly did not work out for a variety of reasons and spent nine hours getting really, really tired in interesting scenery, without skiing much.

The drive back north was uneventful. We enjoyed another gorgeous sunset that painted the desert red and visited the inevitable towns of varying weirdness along the way. In no particular order:

Gobernador Gregores - We got lost and drove several circles before finding a way out.
Río Mayo - Seemingly 80 % of the town are military barracks. The occupants appear to spend their time building walls around the barracks.
Perito Moreno - We spent a night here. Room temperature 35 ° C due to gas heater we were forbidden to turn off because apparently it is hard to turn back on again.
Facundo - who knows.
Tecka - They put a lot of effort into watering a decorative strip of lawn in the middle of their central "avenue".
Bajo Caracoles - Does this mean "low snails"? We did not see snails. 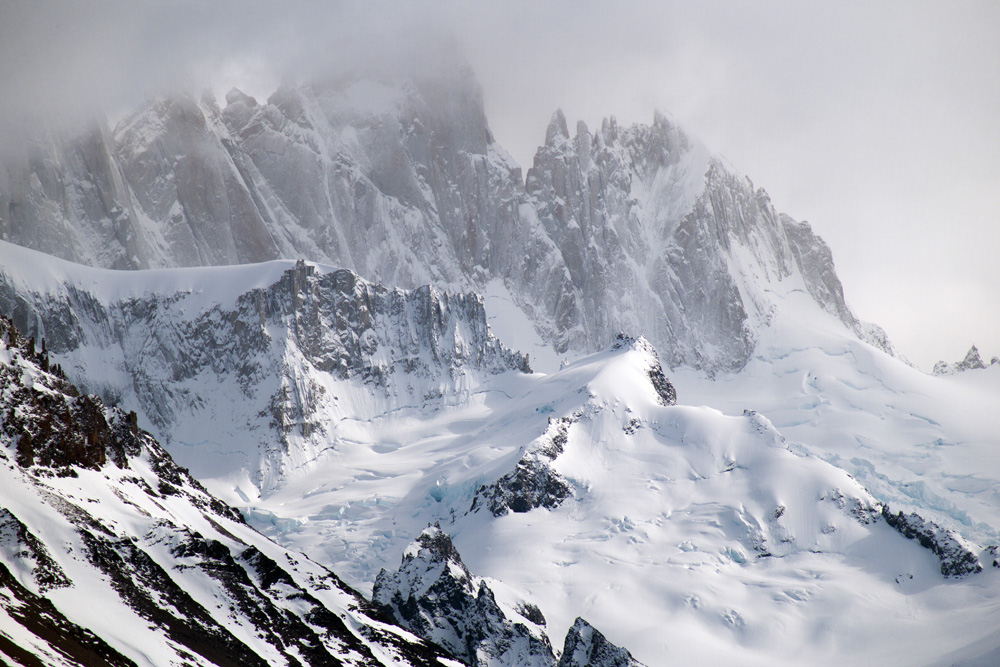 With a nice forecast in the north, we made our way to Tronador, leaving the trusty Chevrolet at Pampa Linda. The approach is long and somewhat annoying, partially because there was too much snow to walk far and not enough to start skinning soon, and partially because it is just long and annoying.


We passed a group of three Argentinians with a guide who were struggling with super heavy or light but antique gear. In the evening we overheard the guide telling them he estimated that it would take them 7-8 hours to get to the top of Pico Argentino. Another group who had summitted the day before in worse weather said it had taken them 6 hours. A little concerned by this we decided to start early and ended up leaving in the dark, at 6, an hour after the Argentinians.


Route finding was not complicated, the weather was perfect and we reached the col, which often serves as skidepot, after not quite four hours. We took our skis to the top in hopes of maybe skiing the North face and cursed them repeatedly during some sketchy rock moves on a crumbly choss pile just below the summit. The North face looked like a fun ski but we couldn't see all of it and were worried about open crevasses - seeing as we had left less than awake and in the dark we had neglected to look at it coming up.

We did the stupid rock move in reverse (gaining a skinned knee and some bruises) and skied to the col, where the others were just preparing to start short roping up. We had a long break on filo de la Vieja and marveled at the perfect weather a bit more.