Dash will be signing autographs and hanging out at Sony's booth (#575) at the SIA tradeshow in Denver from 4-6 pm today.

Oakland, CA native has been an integral part of freeskiing's rise as one of the original members of the Line Skis team during the early millenium and someone whose dedication to style led him to learn every variation of a certain spin - like a 360, right 360, switch 360, and switch right 360 - before moving on to a bigger trick. The Lake Tahoe native spent the early part of his career as a full-time park skier, and was an early standout at park events like Powder Magazine's Superpark.

Since those early days, Dash has moved on to softer snow and steeper terrain, but the freestyle innovation that made him an early standout in the park scene carried over to the real mountains. Given the chance to film in Alaska with TGR after years logging segments off backcountry booters, Dash showed serious talent in big, fast terrain, and wasn't afraid to haul out of the bottom of a line switch. That season, captured in the edit above, earned him a nod from the Powder Video Awards for nominee for Best Male Performance. Now that he's on the Action Cam team, we can look forward to some seriously fun point of view footage from one of the most progressive minds in powder. Now that Dash is also sponsored by high-end pork company Tender Belly, we hope that also includes some backcountry cooking lessons. A post-skin porchetta sounds way better than a bag of nuts… 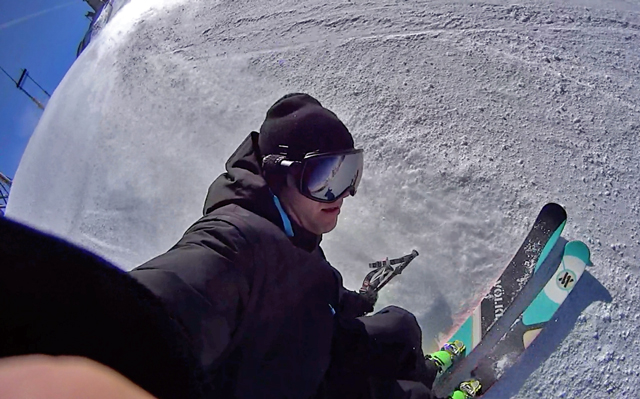 At any rate, Dash will be rocking Sony's second iteration of the Action Cam this winter, which features advanced image stabilization that adjust to vibrations, a Carl Zeiss lens with an ultra-wide 170 degree field of view, 13.5-megapixel images in photo mode, a new splash-proof body that doesn't require a case in snow and rain, and the ability to wirelessly control up to 5 Action Cams with a Live View Remote or smartphone. "My favorite way to use to the Action Cam right now is by mounting it to my goggles or using the camera in either a hand held form or with the pole mount," Dash said.

Dash will be signing autographs and hanging out at Sony's booth (#575) at the SIA tradeshow in Denver from 4-6 pm today. Be sure to stop by and say what's up, and follow Dash's Facebook, Twitter, Instagram and website to join the #ActionCam conversation online.