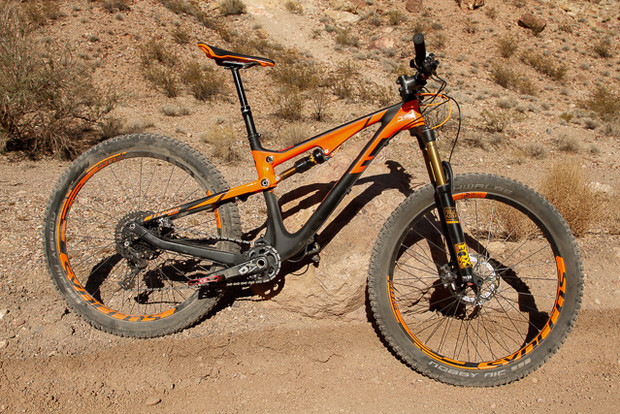 Get ready to truck!! The Scott Genius 700 Tuned Plus.

Scott made a big splash this summer when it became one of the first brands to throw plus-sized (i.e. 3" versus your standard 2-2.5") wheels on its Genius line of trail and enduro bikes. Bridging the gap between standard tire sizes and monster truck fat bike tires, the plus-sized wheels, which TGR's Mountain Bike Editor-At-Large Gunnar Waldman got a taste of with the Trek Stache this summer, hope to bring a negligible drop in rolling resistance while adding gobs and gobs of traction to your ride. 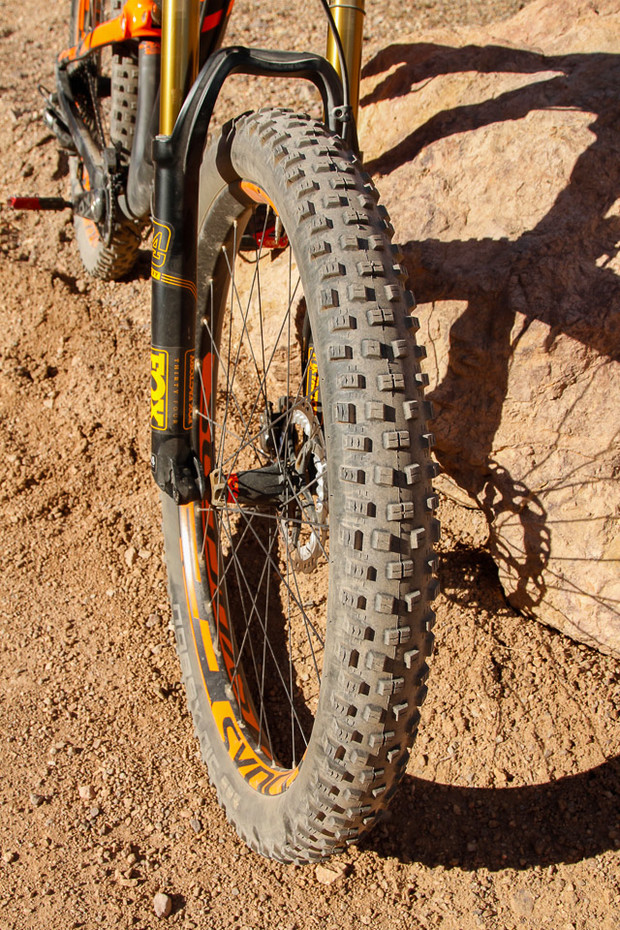 The 3" Schwalbe Nobby Nics gave the feeling of being vacuumed to the ground.

I spent a short while ripping around on the Genius 700 Tuned Plus, Scott's 140 mm-travel trail bike, and while I didn't notice anything in particular rolling up the fire road, as soon as I got onto some singletrack and attempted to pedal up a gross-looking rock face of peppery desert death rock, the plus-sized tires came to life. There was so much traction, you could literally come to a complete stop in a trackstand, start pedaling again, and still smoothly carry on over everything as it nothing had happened. While the 3" Schwalbe Nobby Nics would still spin on the loosest, steep dirt climbs if you were standing, the grip compared to a normal tire was immediate and obvious. 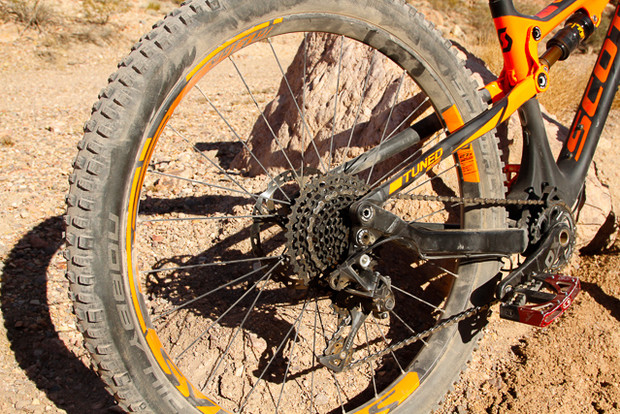 Big wheels, big rims. Sorry, I got nothing.

The testing area at Interbike is a mix of gnarly razor-sharp rock and loose, dry desert sand, and on the latter, the Genius Plus held lines on corners like you were on Pacific Northwest hero dirt, arcing smoothly, quietly, and comfortably. I kept rolling through corners without touching the brakes, seeing how far I could get before needing a quick dab of the rear break to pull the bike back in line, but the grip was unbeatable even as you laid the bike over in the most blown-out corners. While standard-sized tires would either cut through or squirm slightly in the loose dirt, the plus-sized wheels just acted like the condition of the dirt was way better than you wanted to admit. 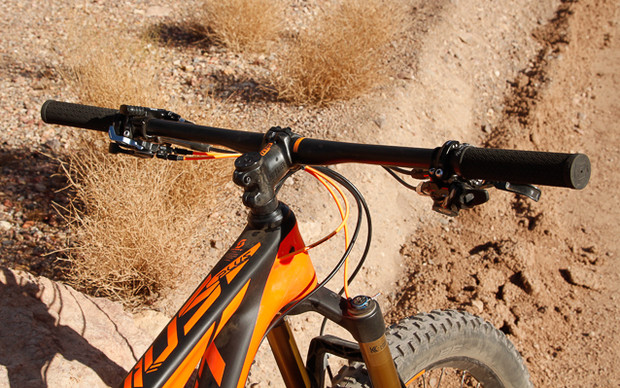 The Genius, like many Scott bikes, has a bar-mounted lever that operates the open/medium/firm setting on both shock and fork on the fly. Up to you whether that's worth the crowded cockpit.

While it felt like the Genius Plus could be a little slacker (the brand's 6 inch-travel Genius LT is, though), leading to some jacking in tight tech sections and down steep rolls, the Genius Plus held its line extremely well in rock gardens and would by and large go wherever you damn well wanted to point it and just monster truck its way through your poor decisions.

It had the feeling of just being vacuumed to the ground until you wanted to get into the air, at which point it would loft predictably and land with a soft recovery. At one point, I just turned off the trail and straight down a chundery, rain-rutted face towards the parking lot, and had to make exactly zero changes in line choice to compensate, instead just happily bombing with aplomb.

It felt a bit like cheating, as you pretty much could ride like a newborn baby in corners, but as long as you knew how to roll the bike over, you never had to think any more about how to handle loose turns. Being my first experience on a plus-sized bike, it was hard to separate the Genius' performance from the wheels it was on, but if you get a chance, definitely give one of these bikes a try on the most godawfully blown-out, loose, rock-strewn trail you have access to. It'll be a whole new world.