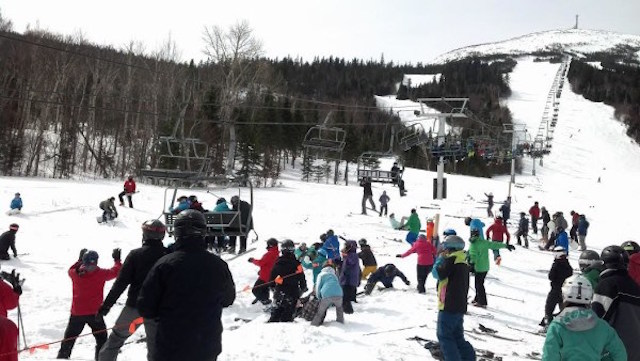 Passengers on Sugarloaf's King Pine chairlift hold on for dear life, or jump off entirely, as the lift rolled backwards this Saturday. Darrell Davis photo via Bangor Daily News.

UPDATED WEDNESDAY, MARCH 25th: This Saturday, March 21st, the King Pine fixed grip quad chairlift at Sugarloaf Mountain in Maine suffered a rollback at roughly 11:30 a.m., causing the chairlift cable, and its chairs with ski area guest on them, to roll backwards the distance of nine chairs, according to the Bangor Daily News. In the video below, guests can be heard screaming and even a few jumping from the chair as skiers and riders on the ground scramble to come to the rescue. All told, 7 people were injured in the incident and a total of 203 skiers and snowboarders had to be evacuated from the chairlift by Sugarloaf ski patrollers, who lowered guests from the chairs with ropes and harnesses.

While the chairlift had been inspected and certified for operation by Maine's Board of Elevator and Tramway Safety this fall, and was allegedly the first rollback to happen at a ski lift at the resort, it's not Sugarloaf's first chairlift accident in recent years: on a blustery day during the 2010 Christmas holiday, the cable on the Spillway East double chair derailed and dropped several chairloads of guests 30 feet to the ground below. Eight people were injured and 150 had to be evacuated. Sugarloaf replaced that chairlift with a new quad the following year.

According to Ski Area Management Magazine, the rollback was due to mechanical failures in the King Pine chairlift:

SAM Magazine—Carrabassett Valley, Maine, March 22, 2015—Investigators from Sugarloaf working in conjunction with an engineer from the State of Maine Board of Elevators and Tramways have identified mechanical failures that led to the King Pine lift rollback, resulting in injuries to seven guests yesterday.

The investigation began shortly after the evacuation of the lift was complete. Preliminary findings revealed that the trigger for the incident was a major mechanical failure in one of two gearboxes connecting the lift's electric motor to its drive bullwheel.

The gearbox failure effectively de-coupled the bullwheel from the lift's primary service brake, which is located on the drive shaft between the two gearboxes, and its anti-reverse brake, which is the first of three redundant backup mechanisms for preventing reverse travel.

The final braking mechanism, known as a drop dog (a large metal pin that drops into the bullwheel to prevent rotation), apparently failed to deploy as designed.

"The cause of the gearbox failure and the failure of the drop dog to deploy as designed both remain under investigation," Ethan Austin, Sugarloaf's director of marketing said.

Just one day before the incident, the gearbox passed a vibration test—a routine preventive maintenance procedure intended to identify potential problems. Another preventive procedure, an oil analysis test, was performed on Jan. 19. Both tests were conducted by outside contractors who specialize in gearbox analysis, and neither revealed any irregularities.

Lift mechanics routinely check gearbox oil levels as part of their daily pre-operating checklist. But the machinery inside of a lift gearbox is not easily observed, so Sugarloaf contracts for routine oil analysis and vibration tests that can indicate potential problems before they occur. The gearbox last underwent major servicing, including the replacement of worn components, just before the start of the 2011-12 winter season.

"Our first concern remains with those who were injured, and those who went through a truly frightening experience," Austin said. "Based on what we know now, we're grateful that this situation wasn't any worse."