The last scheduled part of my trip has wrapped up. I just spent the last week riding some of the biggest lines of my life and watching top riders from around the world huck themselves off cliffs.

The first Red Bull Rampage was held in 2001 just outside of Virgin, Utah near Zion National Park. The terrain in the area is unique on a world wide scale. With steep spines, loose dirt, and huge drops that created a style of ridding never before seen. There were no built trails, it was simply called freeriding. Similar to the style of free skiers, scoping a line that looks doable, point and shoot. Today the tradition of pushing the limits and riding huge lines continues. 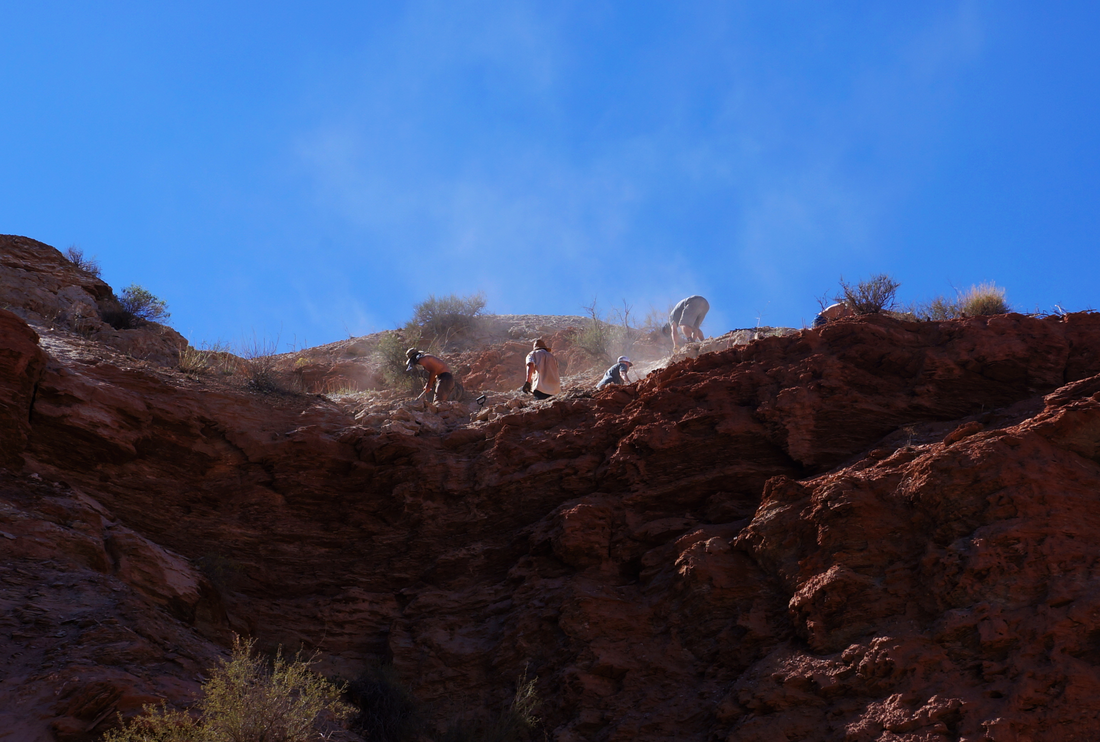 The competitors arrive weeks ahead of time with their dig crews battling the searing desert heat. Shaping the treacherous terrain into what they hope will be a winning, white knuckle descent and grabbing a podium spot. 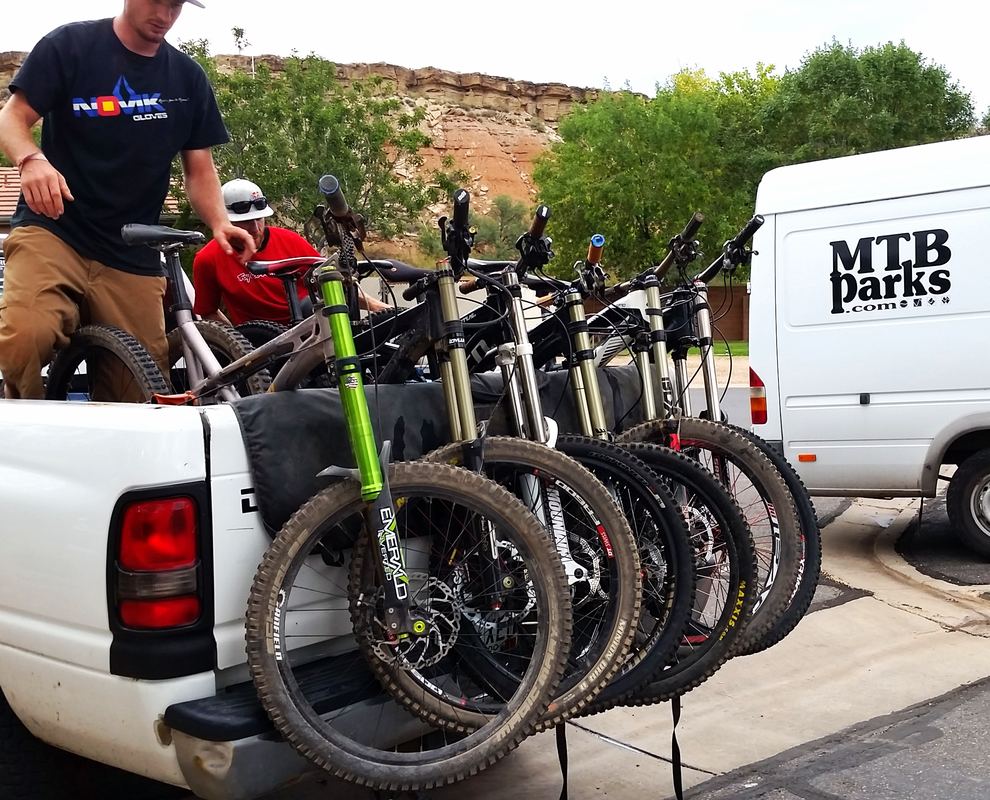 I spent the week at Rampage with the MTBparks.com crew. There was no shortage of ridding in the area and evening shuttle went out daily. The old Rampage site is open to the public for ridding which offers some super crazy lines. We also spent a lot of time shuttling a couple trails that start at one of the near by mesas. I'm glad I had a solid season of riding under my belt before tackling these trails. The main trail we sessioned was called Flying Monkey, sporting some serious exposures and beyond technical riding. The second trail was called King Kong. This was by far the biggest line I'd ever ridden. A narrow spine running from the mesa down to the valley. With multiple drops and sheer cliffs on either side it was burely!! I managed to ride about half of the big stuff. I ended up piling myself up off a one of the bigger drops. Subsequently getting a little too close to finding out what the bottom of that canyon looked like... All I have to say, I was glad to be wearing all my pads and a neck brace. I never made it back after I got my bell rung, so I'll return next year and hit it clean. All in all, a week of riding the old site and shuttle runs was awesome, can't wait for Rampage 2015! 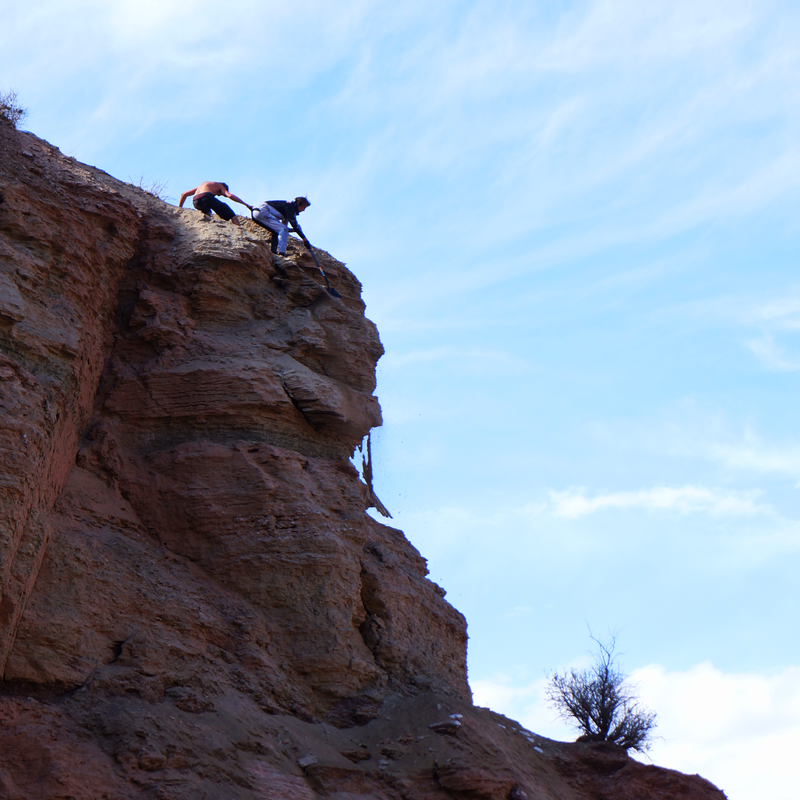 As the competiton grew closer, riders and diggers were putting finishing touches on their lines. A few days before the big show riders are allowed to practice and test their lines. 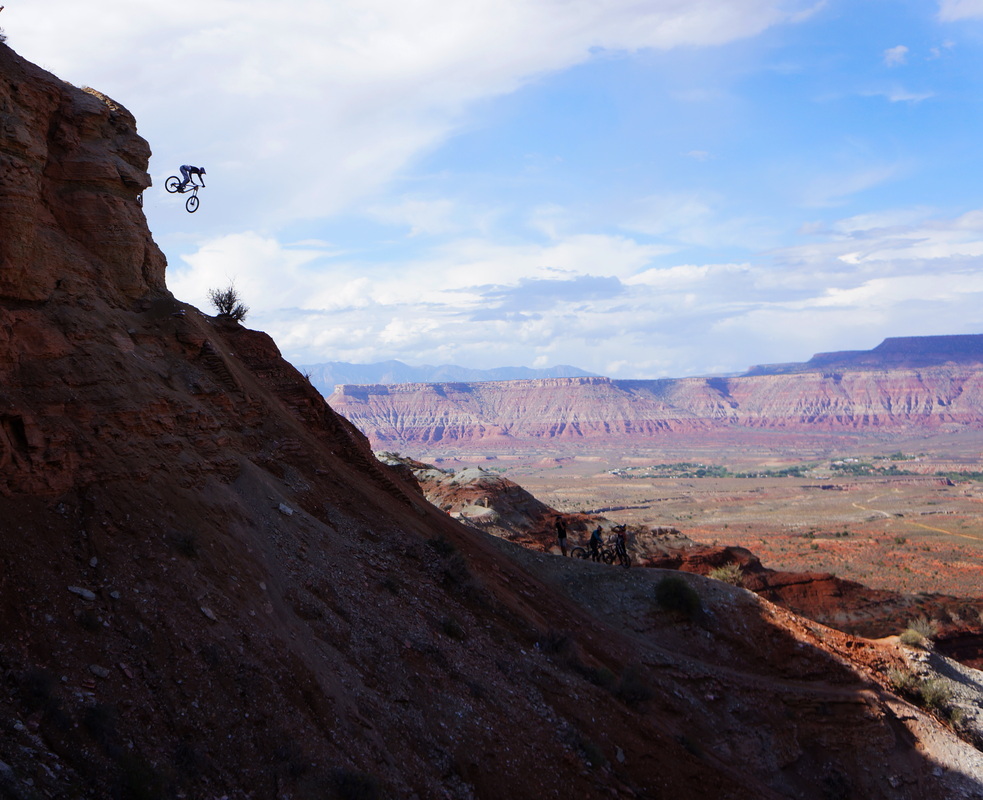 With a media pass through MTBparks.com I was able to get on site early, check out the lines, and watch the practice runs. A handful of photographers and myself and been waiting for this "drop in" from Brandon Semenuk. Without a speed check or practice run-in, he hit the feature without hesitation. Semenuk finished the weekend with a 3rd place finish, clenching an overall win for the Freeride Mountain Bike Series. 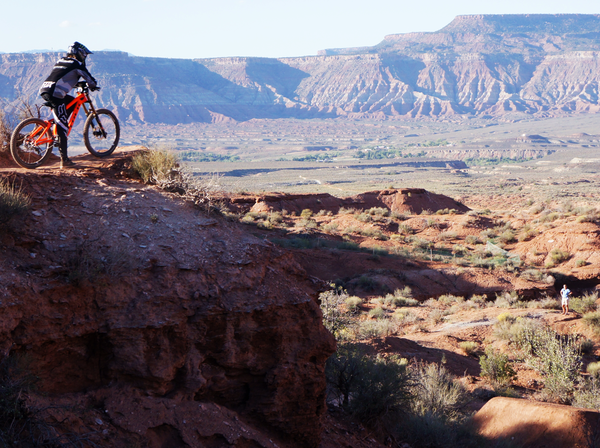 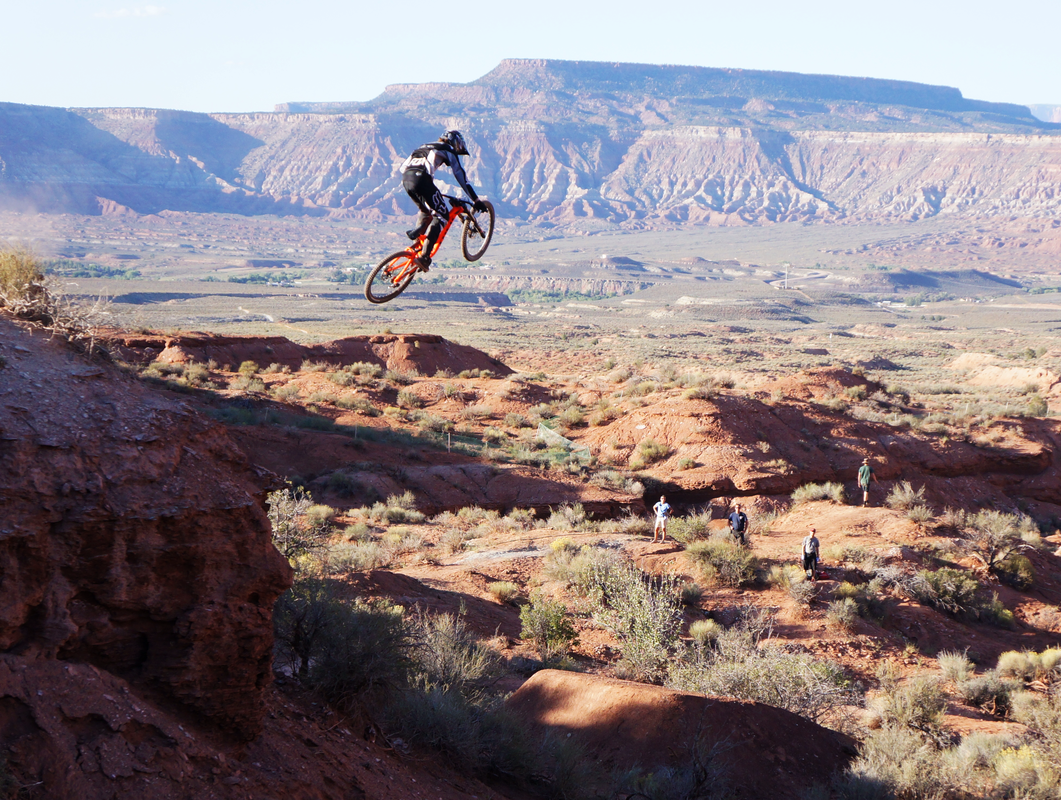 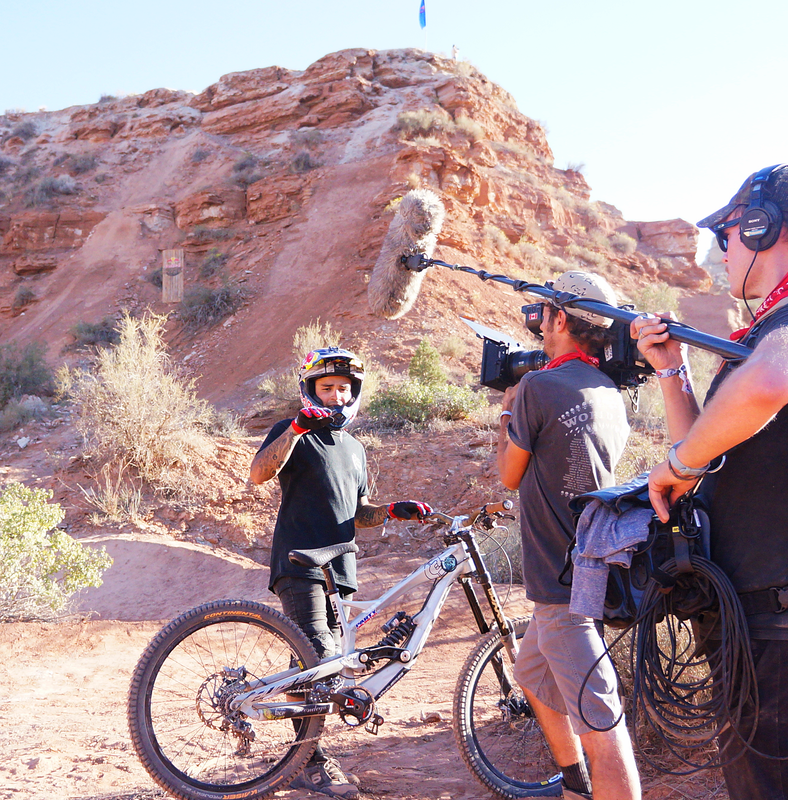 The biggest drop on the course this year, Andreu Lacondeguy being interviewd by Red Bull Media. He just stompped a 76' cliff drop. Lacondaguy was chomping at the bit for a win this year after finishing 4th the last three years. He absolutely killed it in finals and took a 1st place win! 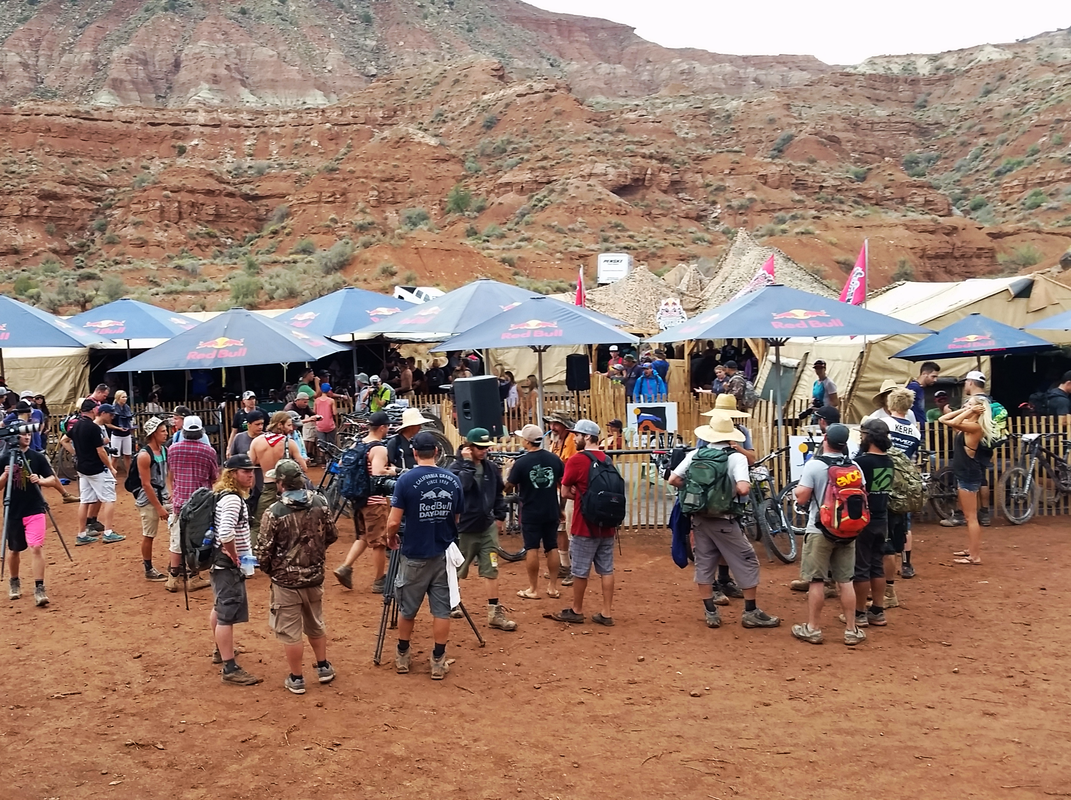 Qualifiers started on Thursday. The top twelve riders from the last Rampage are automatically qualified for finals. An additional 26 riders, on an invite basis, are throwing down for ten more spots in the finals. Near the end of qualifications a storm rolled in and everyone was evacuated from the site due to lightning and flash flooding. 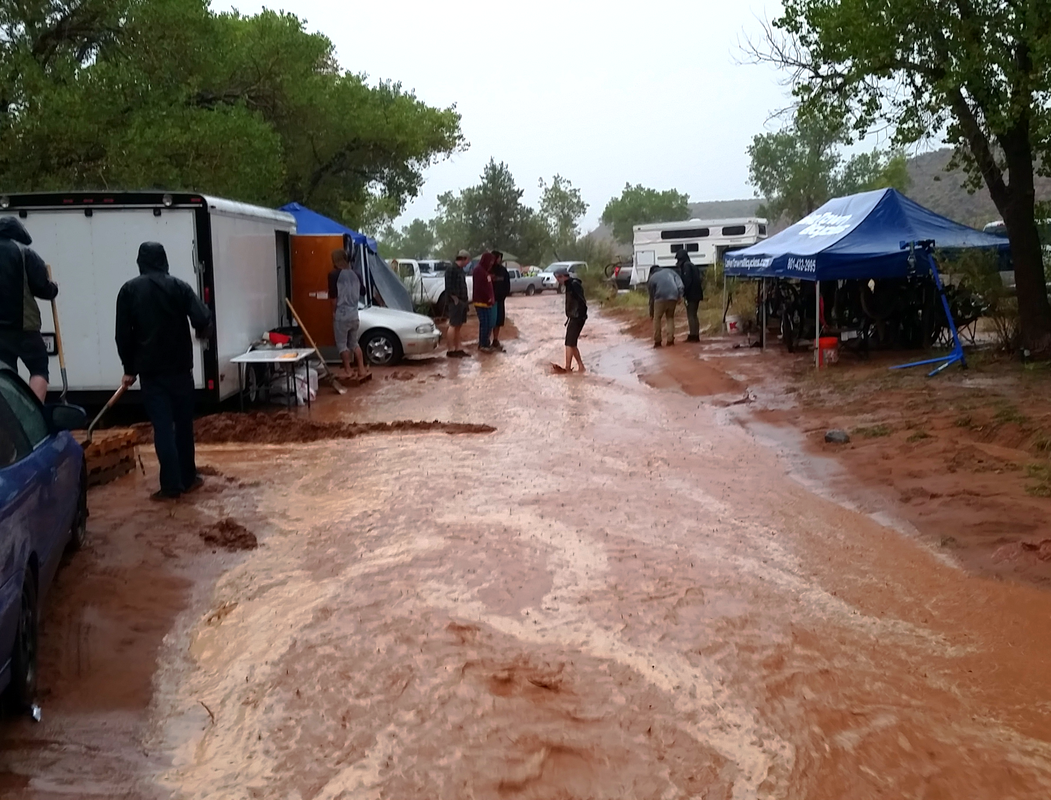 The rain contined to fall through the night and most of the following day. The venue was completely shut down and the camp site was flooding. This picture shows the road through the campground. There were a couple hundred Rampage spectators camped here for the week. Most of them tent camping, it was a rough day. Luckily I had parked on some higher ground(but not much). 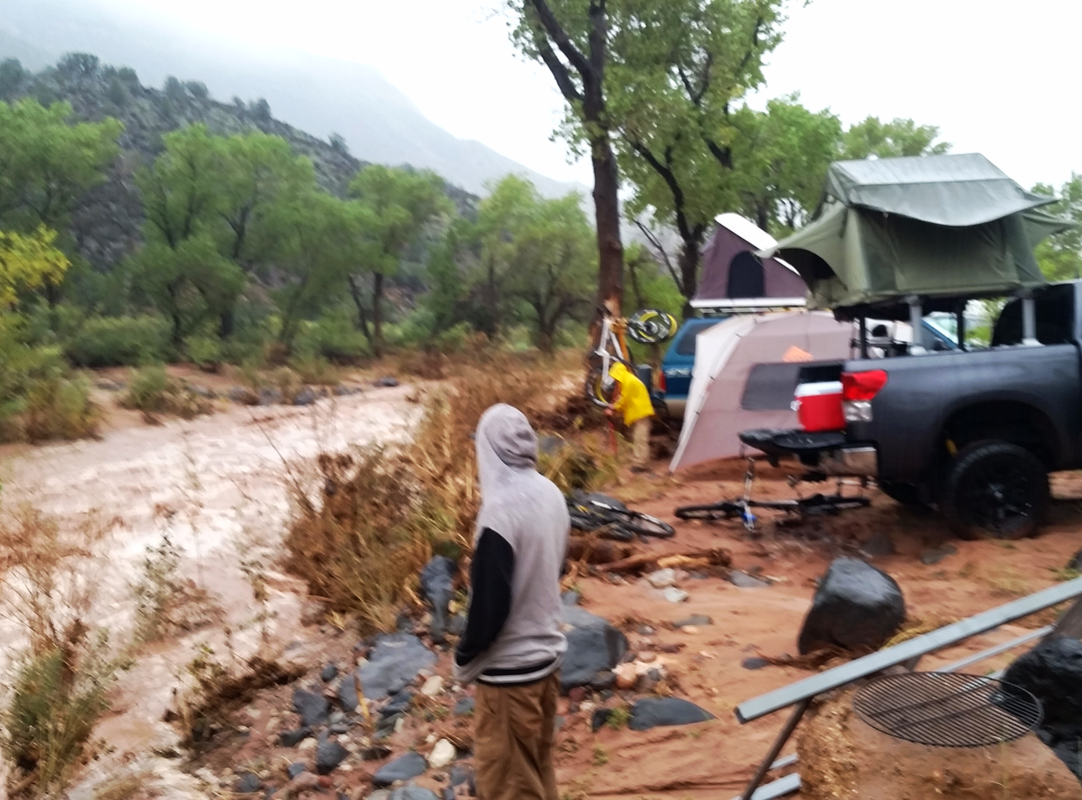 The day prior you could have walked across this "stream" without getting you feet wet. It had quickly turned into a raging river and continued to rise throughout the day. Some people were getting nervous and packed up and moved out of the campground. A friend and I had headed over to the main RV park in town in search of a hot tub and cold beers, leaving the truck at the site. 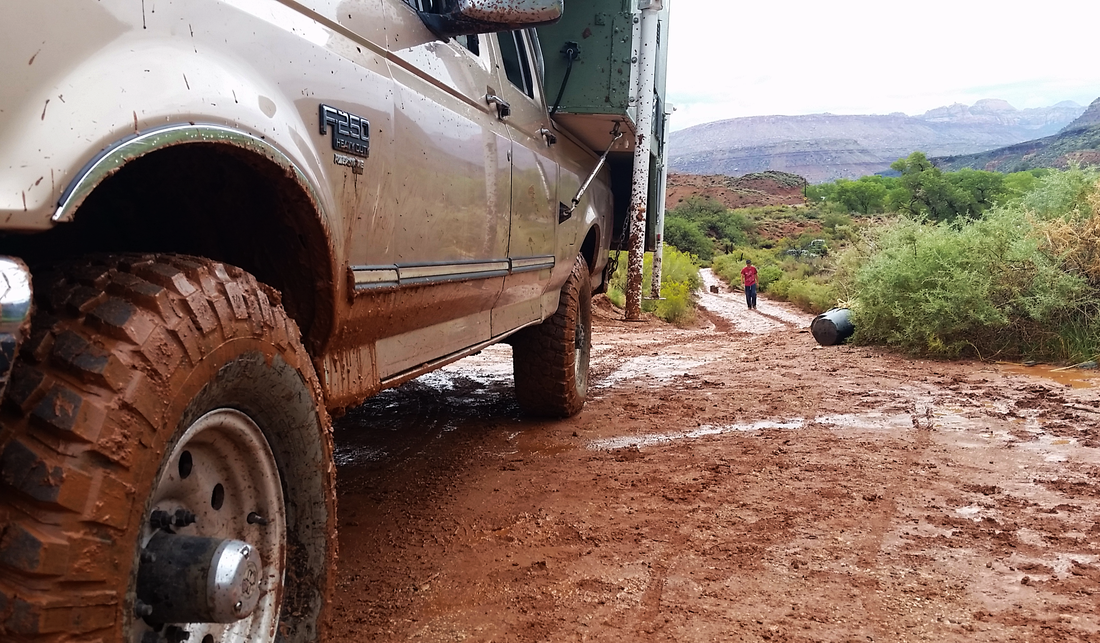 About an hour later I got news that the Sheriff was evacuating the camp site. We hauled ass back to the campground but we were stopped by the authorities. The Sheriff said the road was closed and he wasn't letting people through. I told him I had my camper at the campground, "I had to at least try". He said "oh the green camper? your not getting out". He let us through and I quickly started breaking down camp and trying to find an exit from the flood zone. Most people had already evacuated, abandoning tents and any vehicles that couldn't make the climb up to the paved road.
I was determined to get my home out of there, I couldn't even imagine watching my whole life wash away. I put it in 4 wheel low and went for it. The road was a mess, taking detours, dodging stuck vehicles and empty tents, not wanting to stop and sink. The climb out was white knuckle, with the red clay turned to pure grease, it was slick. There was no room for error, parts of the road had washed out, leaving inches between me and tipping off the side. With a bit of an audience at this point I pointed it up the hill, I didn't even look in the mirrors for fear of loosing the camper, it was all or nothing. The Betty climbed out like a champ and to the safety of pavement. The beefy tires did their job keeping me on the road and out of the ditch. Back on asphalt, the Sherriff walked up and said "I really didn't think you were gonna make it". "Me neither" I said. The site didn't flood but I decided to get a spot in the RV park for the next couple days anyways, haha. 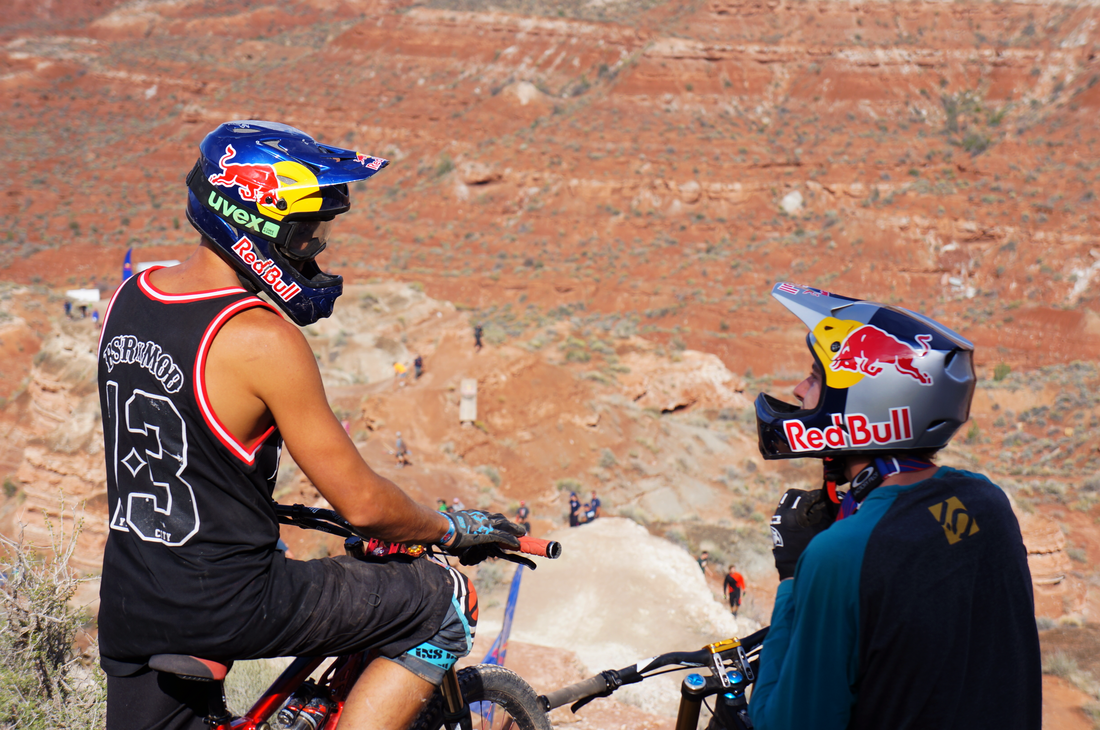 The weather finally cleared allowing qualifications to finish and one last practice session for riders before the big show. The finals were pushed to Monday instead of the planned Sunday competition. The conditions of the terrain and changed drastically with the extreme amount of rain we had received. Gauging you speed with the wet soil was a challenge but the riders were more than ready to send it on Monday. 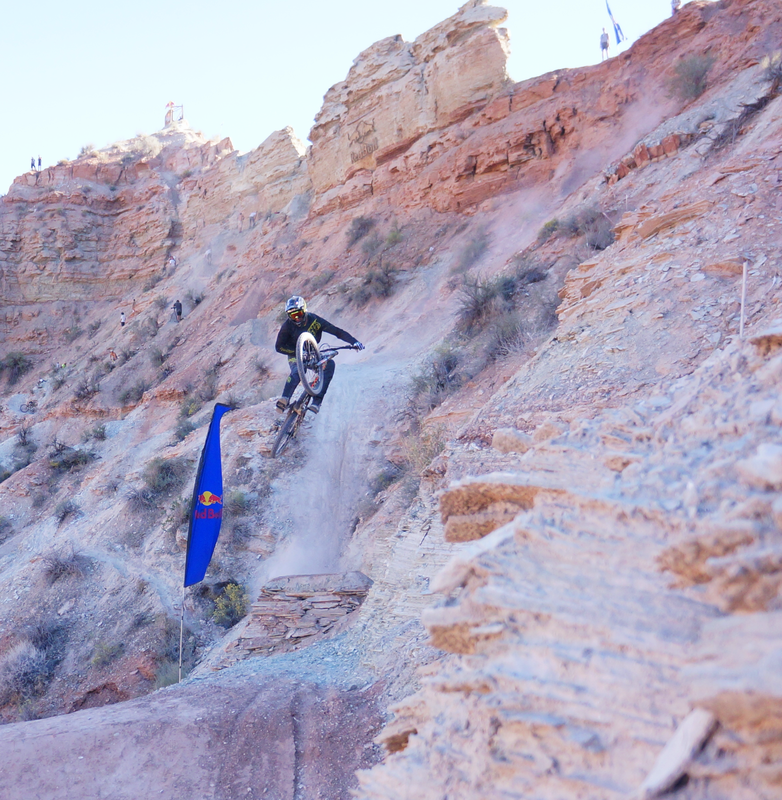 Riders getting there lines dialed in before Monday 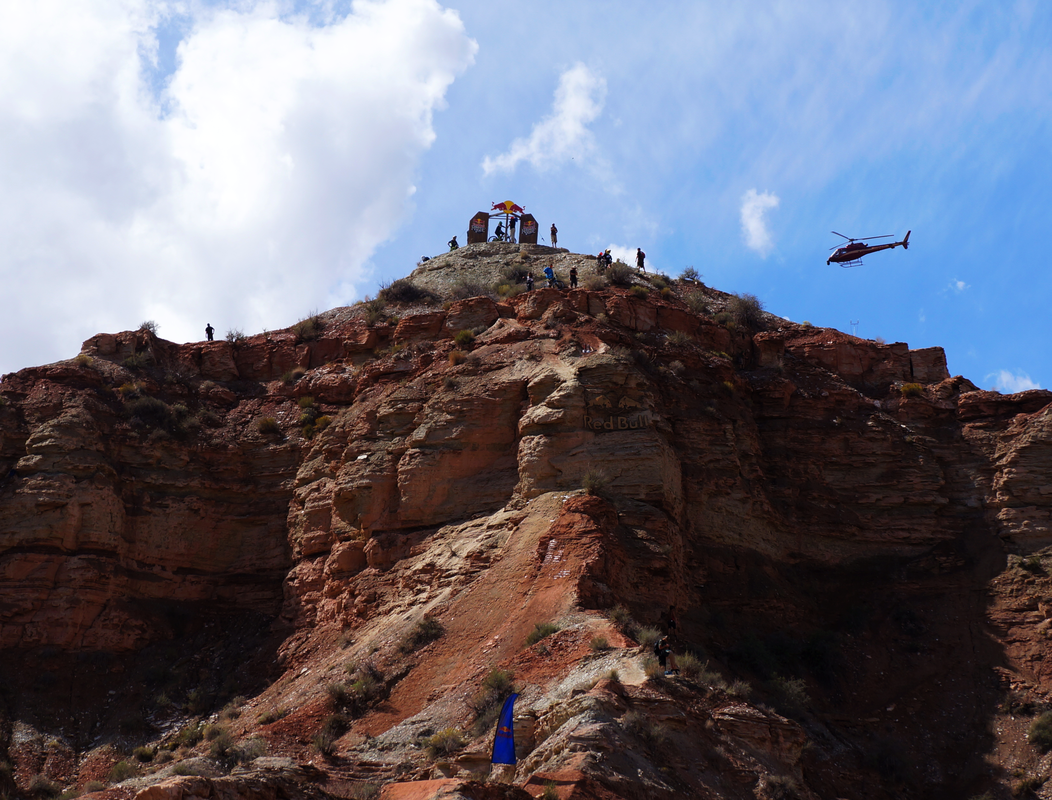 On game day the completion was fierce. Riders from around the world all gunning for that top spot on the podium. A win at Rampage comes with some serious bragging rights and even more respect in the freeride community. 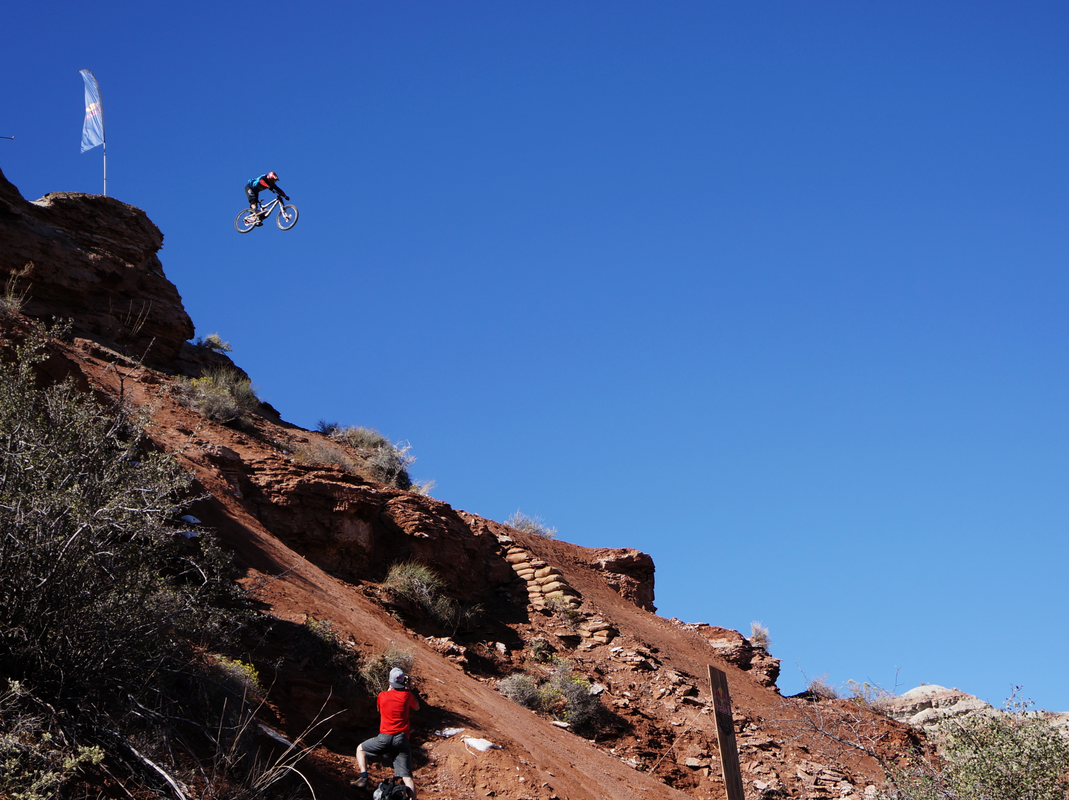 Kyle Strait absolutely sending it on this huge feature on his first of two finals run. The second time he "no handed" it, absolutely insane. 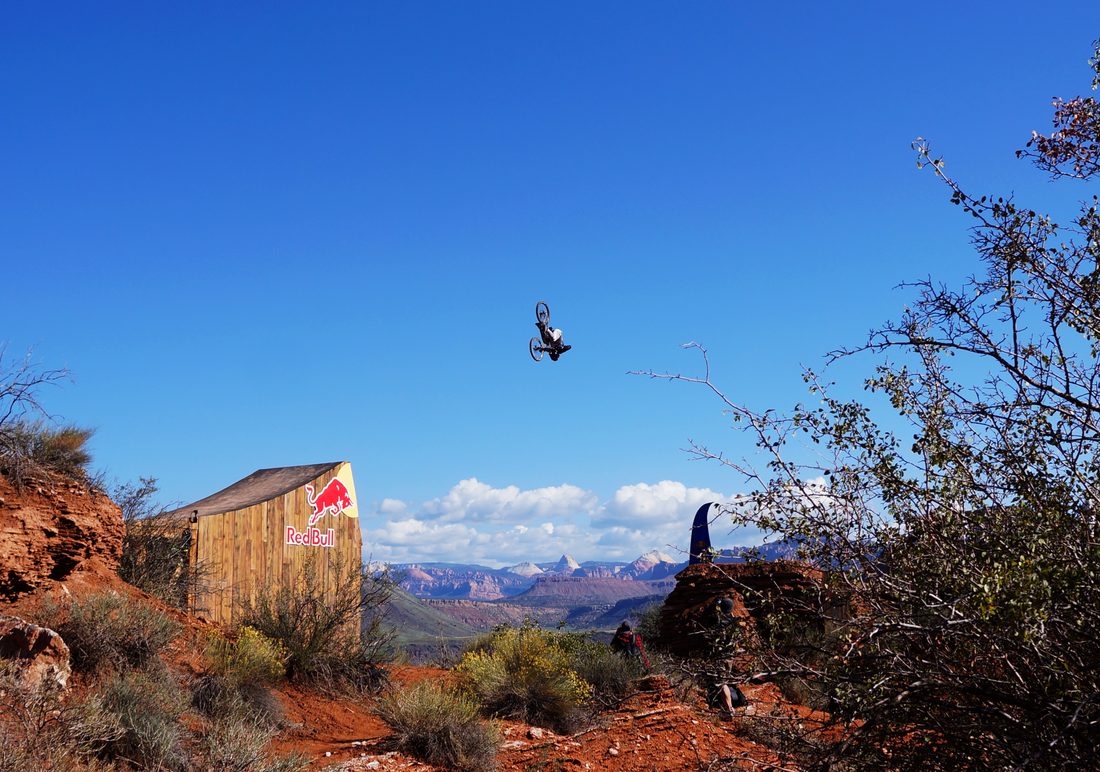 Tom Van Steenbergen pulling a front flip over the 70 foot canyon. One of the hardest tricks in the bike world over a very high consequence feature. The landing did not go so well for Tom, over rotating and "yard saleing" it on the landing. But its finals, go big or go home. 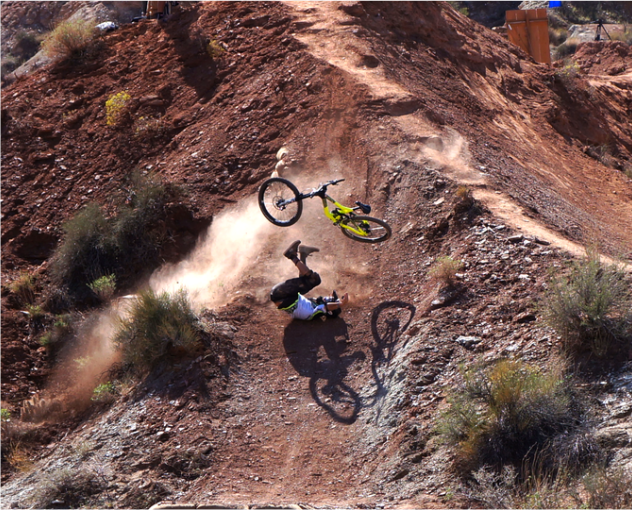 The majority of riders had the same mentality. Being one of the last riders down the mountain this competitor went for a back flip along the upper spine. The trick didn't bring the intended results, but walked away in once piece. 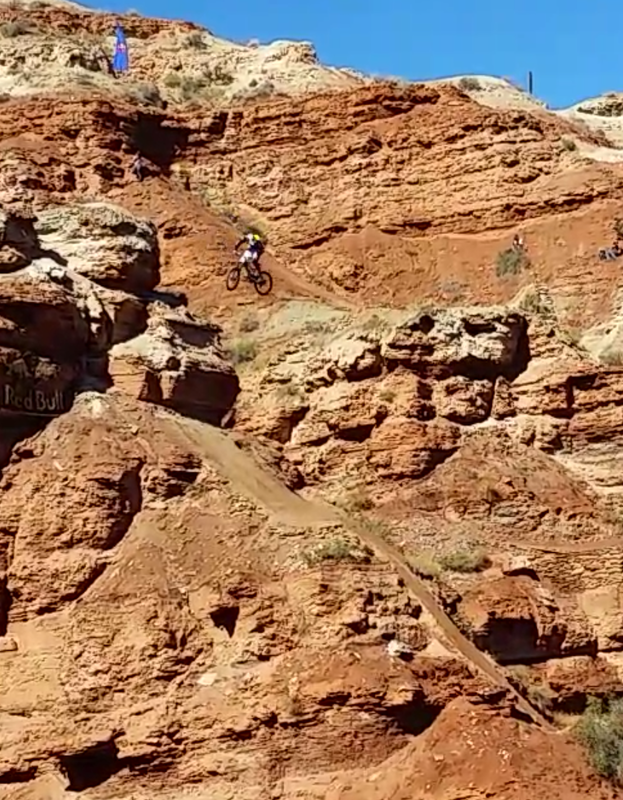 Cam Zink stomped a huge 360 off this killer drop, not once, but twice! Clenching a second place finish and the Best Trick award!! 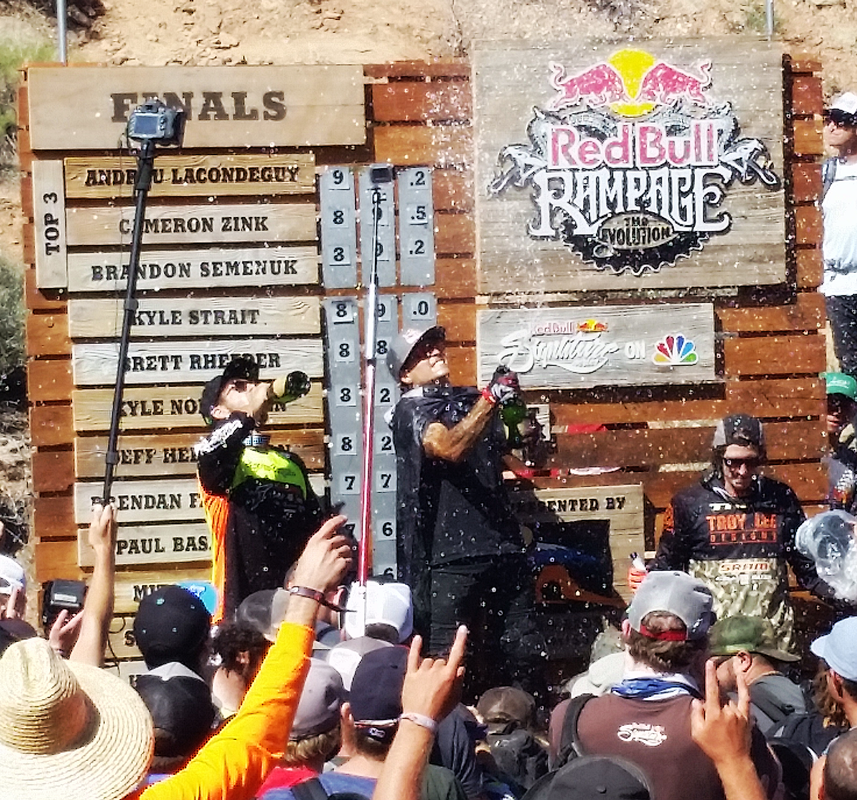 The skill and riding at this years Rampage was mind blowing. Just walking around the site was treacherous. More than one photog took spills down the side of the mountain. I couldn't imagine what it would be like to ride this venue. The day finished with Andreu Lacondeguy taking the top spot, Cam Zink in second, and Brandon Semenuk in third. The party started on the podium but continued late into the night at the campground.

For more RV adventures and my current whereabouts hit up my blog MilesintheMirror.com

Below is a short highlight real of all the action. Check it out!