American David Wise–3-time X Games ski halfpipe gold medalist, defending FIS World Champion, and Sochi Olympic Gold medalist–dumped FIS and their Freestyle World Championships for the X Games this week. He's competing in Aspen instead–right now, in fact– instead of Austria. FIS, the European competitive ski and snowboard organization, made the thoughtful decision to host their freestyle championships the exact same time as the annual Winter X Games, forcing the world's top slopestyle and halfpipe athletes to effectively choose between their event for the sake of points and a title and the event that people actually give a shit about. The polite Wise, who's willfully danced FIS's dance for years in the hope they'd come to understand and appreciate freeskiing and its developed culture, finally gave FIS the cheek after they were unwillingly to change the timing of any of their events so athletes could make both major events work. "I want you all to know that I did everything that I could for the chance to defend my title as World Champion," Wise said in a blog post on his personal site, "but FIS made that impossible for me."

For those hopping into this with little context, allow me to elaborate a quick history of freeskiing and FIS. Basically, FIS–started in 1910 and its roots unwaveringly planted in European ski racing–strangled the creativity out of mogul skiing to the point that the best athletes didn't want to do it anymore. They started jumping over snowboarders in terrain parks, doing grabs and flips and spins, and printing "FIS Sucks" stickers. They swore off the Euros once and for all.

But then, the whole thing grew, and eventually the guys and gals totally killing it at the X Games thought it'd be nice to win an Olympic medal for all their efforts, and so they began to court FIS in the hopes of earning the accreditation and structure necessary to get events like ski slopestyle and ski halfpipe into the Olympics. Kids doing crazy tricks draw a lot more viewers than curling, so eventually the International Olympic Committee was down for the cause, and FIS became freestyle skiing and snowboarding's governing body when it came to the Olympiad. Of course, FIS's lingering apathy for things other than slalom gates, and corresponding cluelessness, have been impossible to fully root out, as demonstrated by the organization's attempt to use the same exact judges for both skiing and snowboarding halfpipe, and ski and snowboard slopestyle, in the Olympics.

More recently, it's become egregiously plain how few fucks FIS cares about appreciating and involving itself in the existing culture of freeskiing and snowboarding. First came their simply atrocious official theme song, "Up On The Mountains," which, for the sake of clarity, you should just watch (above) before the tirade I would otherwise take off on leads me straight to clinical depression.

Then FIS decided to schedule their Freestyle World Championships–with official song from hell–at the exact same time as the Winter X Games, the event people actually care about. Athletes pleaded repeatedly for FIS to change the dates around just enough so they could attend both events and everyone would go home happy, but nein! The Euros would have none of it, and David Wise–halfpipe's reiging X Games, Olympic, and World Championship gold medalist–gave up on FIS's event, opting instead to attend an event that, despite the overwhelming presence of Tostinos Pizza Rolls and Mountain Dew, has a real track record when it comes to encouraging, supporting, and actually understanding sports like freeskiing and snowboarding. 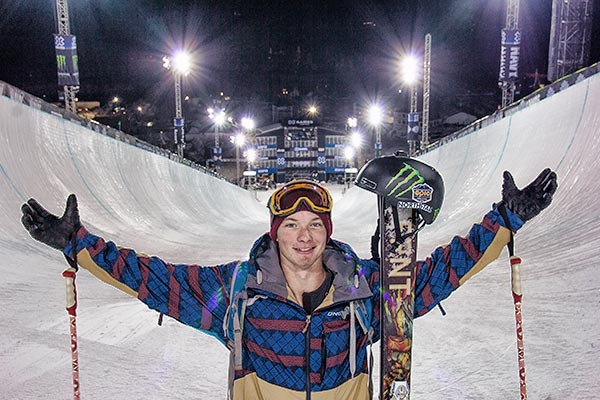 David Wise decided not to compete in this year's FIS Freestyle World Championships, opting for the X Games instead. Davidwise.com photo.

As David wrote in his blog post, "FIS obstinately refused to work with us in any way. That is the arrogance that we are dealing with; arrogance that is rooted in 105 years of history. I honestly believe that FIS thought we would skip the X Games to attend World Champs. They are THAT out of touch with our sport. After arriving and participating in the first X Games official practice last night I realized that my fellow competitors feel the same way I do. Every single rider that I personally would rank in the top ten in the world are here at X Games. I do not intend to slight those that chose to attend World Championships, but the 2015 FIS World Champion is going to be a person who did not truly have to beat the best skiers in the world to win that title.

I want you all to know that I did everything that I could for the chance to defend my title as World Champion, but FIS made that impossible for me."

Root for David as he competes, right now, at the contest he felt does justice to the sport. "I do not intend to slight those that chose to attend World Championships," he said later in his post, "but the 2015 FIS World Champion is going to be a person who did not truly have to beat the best skiers in the world to win that title."