Chamonix, France — Sam Smoothy, of New Zealand, who has battled through qualifiers and injuries over the last few seasons proved that persistence pays off and hit the top rung of the Swatch Freeride World Tour podium for the first time in Chamonix. In second place was one of the tour's most consistent performers Reine Barkered, of Sweden, and in third, tour newcomer Oakley White Allen from the USA who, following his second place finish in Revelstoke, will go to the top of men's ski rankings.

Smoothy chose the lookers left line taken by a number of riders and looked to be fighting for a place on the podium with his control and fluidity in the upper face. Then he took a slightly different angle into the final section and dropped an absolute beauty of a cliff — longer, cleaner, sweeter than his rivals. Smoothy was almost speechless afterward.

"Winning here in the home of Freeriding, it doesn't get better, it's amazing," Smoothy said.

Rock solid in Revelstoke, Douds was again on the top of his game taking a creative line on the extreme lookers right of the face. He was smooth and clean throughout, a text book freeride lesson for any youngsters with world tour ambitions.

"It's great to win at home in Chamonix-Mont-Blanc," Charlet said. "I threw a front side 360 at the top and dropped four cliffs overall. I tried to stay fast and clean and I think I achieved that."

American Jackie Paaso who delighted everyone with one of her trademark cliff jumps in the lower part of the face took first place in the women's ski . Behind Jackie in second was Angel Collinson also from the USA and who seems to podium at every tour stop. In third, making it a great day for New Zealand riders, was Janina Kuzma. After her win, Jacky said: "I chose a line that suited my style and everything went to plan with two airs high in the face and another towards the end. I'm really looking forward to the next contest in Norway:"

The women's snowboard contest was won by US rider Maria Debari: "I was not expecting to win at all although I did ride my chosen line." In second was French rider Margot Rozies who has started the season in great form and in third was another American rider Shannan Yates.

The Swatch Freeride World Tour now moves on to Italy with a quick transit to Courmayeur-Mont-Blanc for the third men's ski and snowboard contest of the season Jan. 24-29. 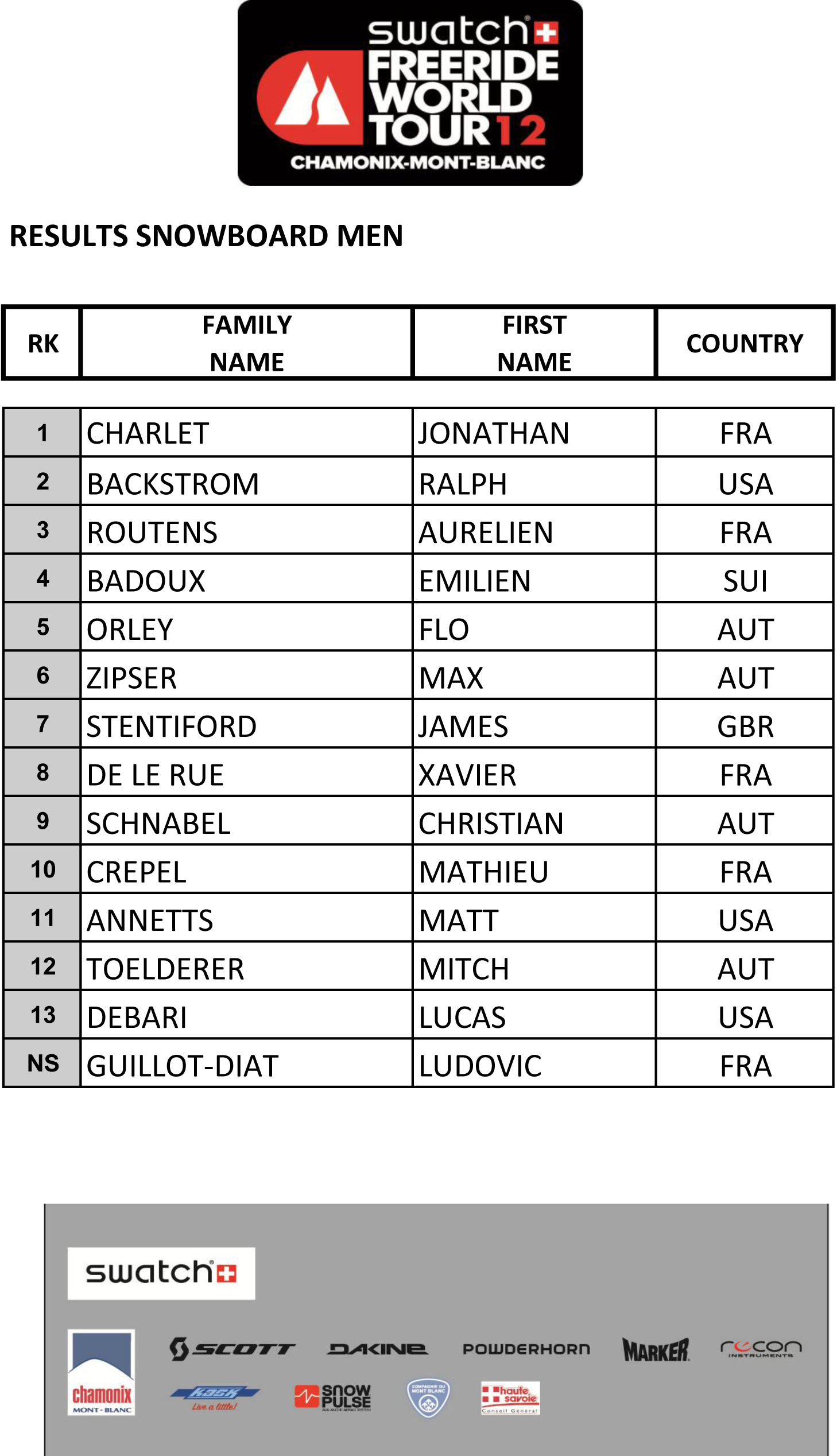 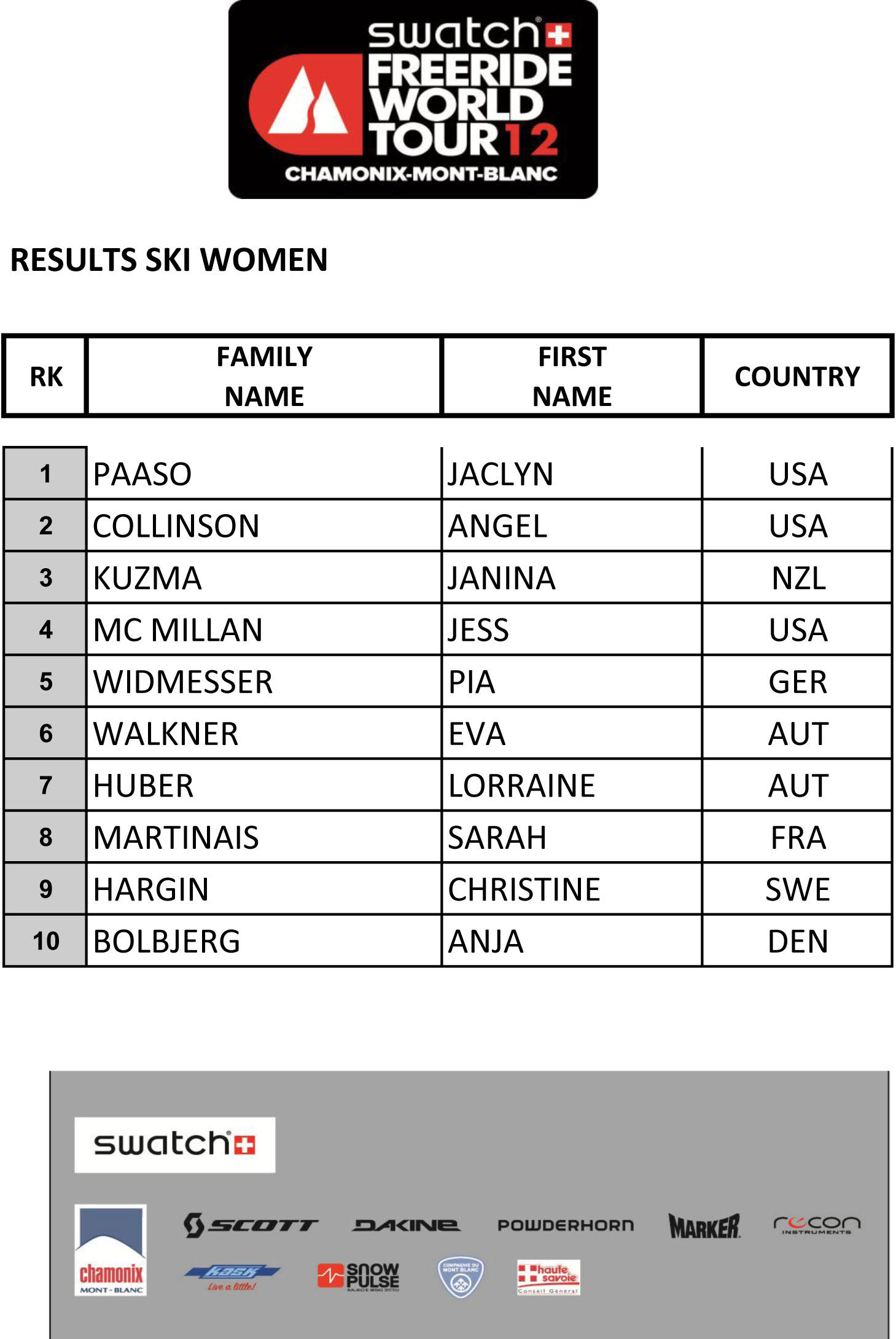 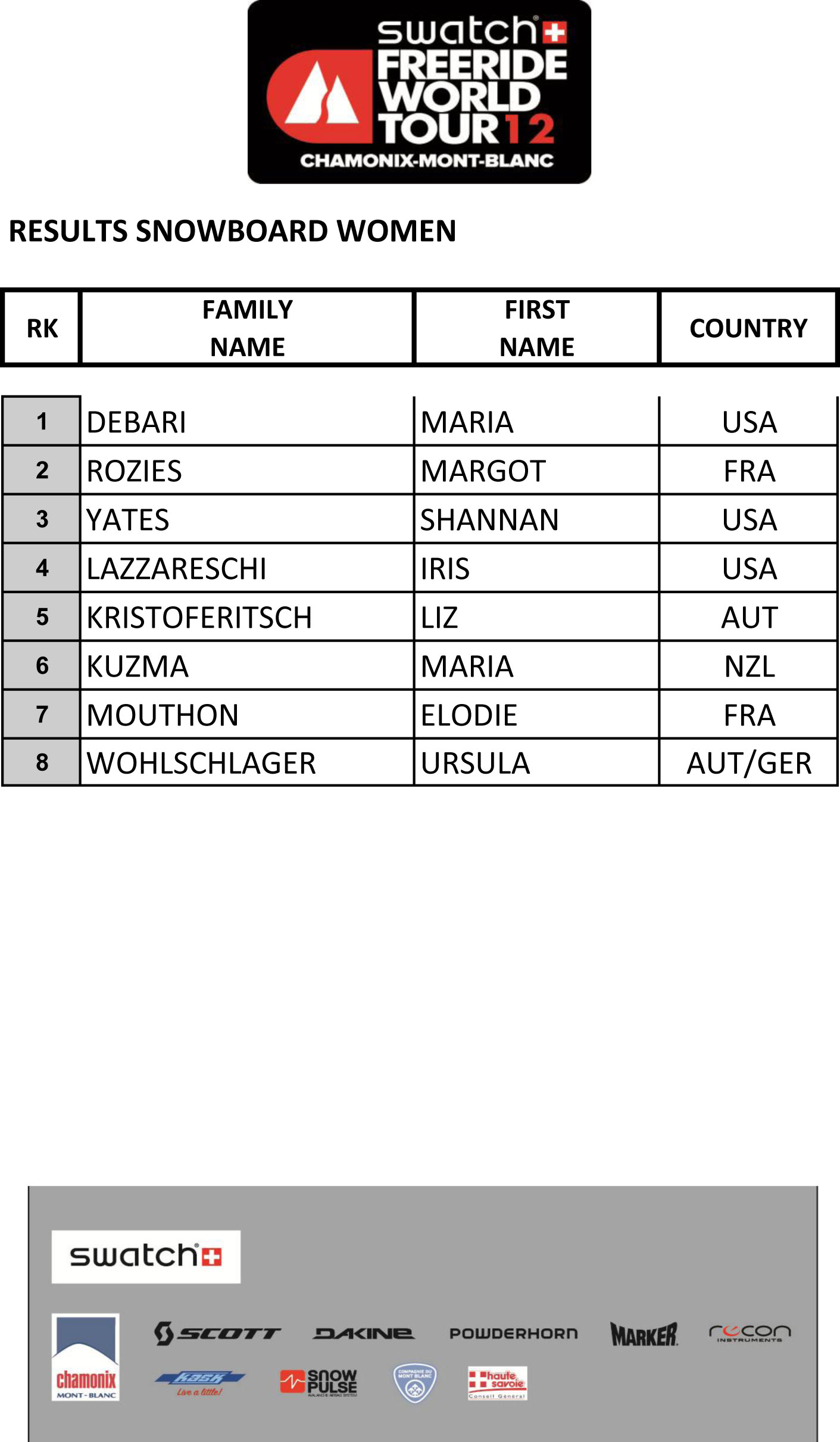