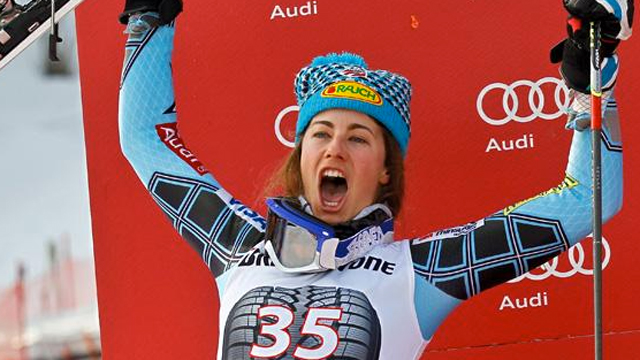 Ofterschwang, Germany - Resi Stiegler (Jackson Hole, WY) celebrated a return to the Audi FIS Alpine World Cup elite with a second in the Ofterschwang slalom. It was the first podium of her injury-riddled career behind first time winner Erin Mielzynski of Canada. Stiegler suffered series of injuries starting in a 2007 crash and was eventually sidelined from the Vancouver Olympic Games. The podium signified a personal victory.

"This is a huge breakthrough and I worked really hard for this," Resi Stiegler said. "Results are difficult to get even if you are skiing really fast. I almost don't have words for how I feel."

"Super, super psyched for Resi [Stiegler]," Head Coach Alex Hoedlmoser said. "This is so amazing for her and it's hard to put it into words actually. She was out for over two seasons completely. It's incredibly tough to come back and catch up to the speed of world class skiers. To get back to racing you have to learn how to race again."