In the end, Vito won the men's snowboard Pipe Finals with his score of 98.00, increasing his lead with the highest score ever to take home the Dew Cup at the Toyota Championships, held Saturday at Utah's Snowbasin Resort. I-Pod finished second with 97.00. 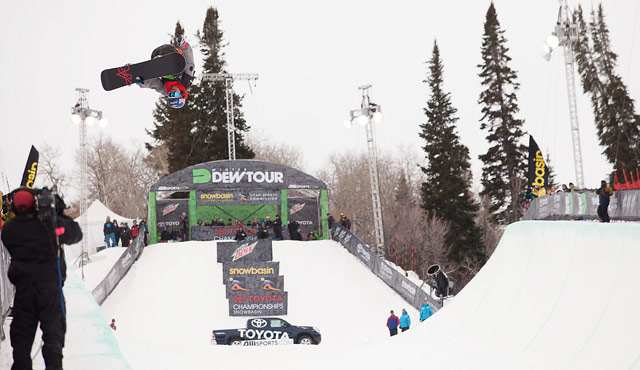 "I-Pod’s riding so well, he’s so consistent and he definitely pushes me every time I snowboard," Vito said. "So it was nice to be one and two with him going into the final stop, because it made me make sure I was on my game and he definitely brought it for sure."

But Vito answered back in his winning run with a double crippler, double Michalchuk, front double 10, cab double 10, front 10 to end with a cab 7.

Up at the top of the pipe, as the last rider to go, I-Pod had one more shot at taking over the top spot.

He responded with a Double McTwist, front double, Cab double, front 10 into a Cab 10. While perfectly executed, it wasn't enough to take the win.

"I’m really happy with my run," I-Pod said. "It’s kind of a long pipe and it’s really under vert, so I was trying to fix a new run together. And it really worked out for me. Louie taking it in the end, I’ll give it to him. But the battle is on."

Results after the first round saw Vito leading over I-Pod (94.75 to 93.00) with one run left for each. After an amazing first run, Trevor Jacob was sitting in third at the end first heat, while rocking a sweet Star Wars-esque full face helmet for extra confidence while boosting his massive airs.

Second round highlights included an amazing run from Spencer Shaw, which included his first ever frontside 14 halfway through, and let him take over the third place position from Jacob and finish on top of the podium.

"That was the first time I’ve ever done that run and a 14," Shaw said. "My heart was pounding so hard at the top of the pipe, and it all worked out, I’m so excited. I’ve never tried it before. Right before I dropped in, my coach was like, ‘Why don’t you try that?’ and I was like, ‘Ok,’ and I dropped in and it worked out well."

For Vito, it was back-to-back Dew Cups after he pulled it off again this season.

"I got two seconds and what do they say? I was the bridesmaid and never the bride, or something like that," Vito said. "I get tired of being second. I’m stoked to be consistent but I wanted to at least get on top of the podium this year. I did and what better place than where I’m living now in Utah, at the Toyota Championships, to walk away with the Dew Cup."

Kelly Clark came back and took down Gretchen Bleiler to bring home the Toyota Championships win and her third Dew Cup at the women's snowboard pipe Finals. Her score of 95.00 to Bleiler's 94.25 gave her the advantage during Saturday's event at Utah's Snowbasin Resort.

China’s Xuetong Cai was another big contender with massive amplitude and 5s and 7s mixed into her run, and she finished in third with and 89.75.

But the battle of the Finals really became all about Bleiler and Clark, who were both guaranteed a Dew Cup with the win. 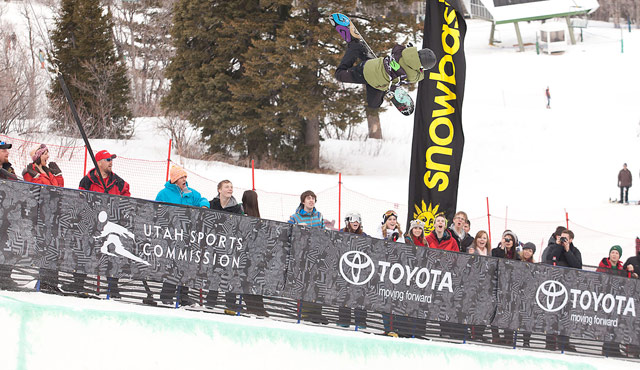 Bleiler dropped in for her second run before Clark, and started things off with a massive Crippler, 900 tail grab, backside air tail grab, and a frontside 7 mixed into her run. She managed to increase her lead with the 94.25, but with Clark still up top and waiting to drop, there was no guarantee that score would hold up, and such was the case.

“I really had to stay focused on what I came out to do today,” Clark said. “My strategy really gets tested when I’m put in that position where the scenarios change dropping into my final run. I have to stick to the plan regardless of what’s going on around me, and that’s what I was able to do and land it on my feet and come through with the win.”

For Bleiler, it was a bit of a repeat from the first event of the season where she also finished second to Clark.

“I’m bummed,” Bleiler said. “Again, Breck was super close. This was super close. It just keeps me motivated to keep working harder. Last Dew Tour in Breck, that already motivated me for this event and getting my tailgrabs around more on my front 9s. I didn’t do my back 9 today, so I still have more to give. And I know I can do front 10s since my front 9s are coming around so easy now. I’m not too worried, but I’m a little bummed that it was so close."