Teton Village, Wyoming - Jackson Hole Mountain Resort (JHMR) announced today a reduction in the price of the Grand Pass® for the upcoming winter. This news follows the introduction of the Grand Pass® last winter which represented a 25% discount from the previous All Mountain Pass and the lowest season pass price in the recorded history of the mountain. This year’s Adult Grand Pass offers unlimited skiing and riding for the longest season ever, a scheduled 135 days, at an August price of $1195, down from $1255 last year. The Senior Grand Pass will be offered for $815.

The Grand Pass® offerings include attainable options for youth that provide unlimited access to the next generation of skiers and riders. The Youth Grand Pass for ages 6-14 will be $159, the Student Grand Pass for ages 15-18 will be $289, and kids under 6 ski for free. All Grand Passes® include a free START bus pass, complimentary summer tram access, discounts at JHMR restaurants, retail and rental stores, as well as complimentary JH Ski Club membership.

JHMR President Jerry Blann stated “In 2010, the goal of the Grand Pass was to make unlimited, all mountain access attainable to more skiers and riders than ever before. One year after its introduction we can say with confidence that the Grand Pass program has been an unmitigated success. The Grand Pass grew the number of skiers and riders who took advantage of unlimited access by more than 60% over the prior year. This year, at a price of $1195, we are further deepening the discount to make the Grand Pass an even better value proposition for more people than ever before. Furthermore, investments for the 2011-2012 season total over $4.5 million; these include the addition of the Marmot Lift which will connect South Pass Traverse with the top of the Gondola, and a redesign of the Kids Ranch facility. Both of these investments will improve traffic flow and provide a better experience for all of our guests. The excitement will also last longer this year as the mountain will be open from Thanksgiving weekend to Easter, for a total of 135 scheduled days. The combination of price reductions and tangible improvements represent a huge stride in improving access and the resort experience for our local and regional guests.” 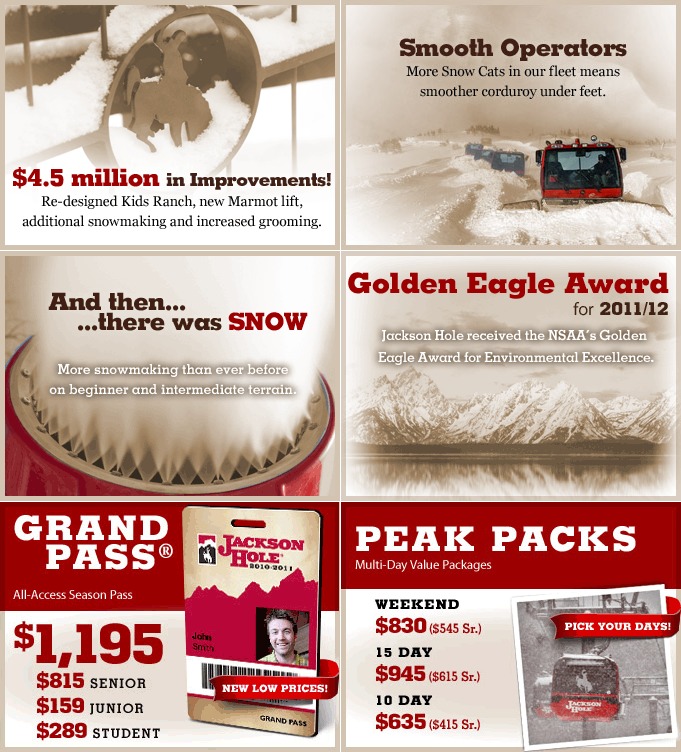 The success of the Grand Pass® has also led to changes in the Peak Packs that reflect purchase and usage patterns from last year. A review of scanning reports revealed that most locals who once purchased the 20 day pack upgraded to the Grand Pass,® and those who remained were only using an average 14 days. As a result, Peak Packs will be sold as 10 day, 15 day, and Weekend offerings to better reflect the needs of local guests. In August, the price for the 10 day pack will be $635, the 15 day pack will be $945, and the Weekend pack will be offered at $830. For early birds, the one day sale of 10 day Packs will be held in Teton Village, Saturday, August 6th, where a limited number will be sold for $570 ($375 for seniors).

Chip Carey, Chief Marketing Officer at JHMR explained: “The changes that we made to the Season Pass program this year closely reflect what our research told us. Our data reveals that the introduction of the Grand Pass last year resulted in the sale of more passes overall and more than twice as many people opting for unlimited access. The introduction of the 15 day Peak Pack will be a better option for previous 20 day skiers; it will save them some money and better reflect their volume of use. Still the biggest news is further price reduction to the Grand Pass, making all mountain access better value than ever before. It was also very rewarding to see the increased number of children skiing on the mountain, and has spurred us on to continue to offer outstanding value options for the region’s youth.”

Operating in the midst of one of the worlds’ most pristine natural environments in the world, JHMR remains committed to its environmental initiatives. In recognition of this work, JHMR was honored with the Golden Eagle Award for Environmental Excellence, which represents the highest honor of environmental achievement in the ski industry. The award came on the heels of JHMR’s 5 year anniversary of ISO 14001 registration (JHMR is one of only 2 resorts in the US to reach this benchmark).