Los Andes, Chile — Athletes have arrived at the remote and rugged Chilean cat skiing operation Ski Arpa to compete in The North Face Chilean Freeskiing Championships, the second stop of the Subaru Freeskiing World Tour. Located about 70 miles north of Santiago, the last 8 miles to Ski Arpa are not paved and are "tough going," according to the operation's website.

Today, athletes are set to inspect the venue. The two-day weather-dependent competition is set to take place Saturday and Sunday. Two to four feet of fresh snow was expected, according to the latest press release.

Watch the introduction video, see the event schedule, view a photo of the venue and read the press release below. 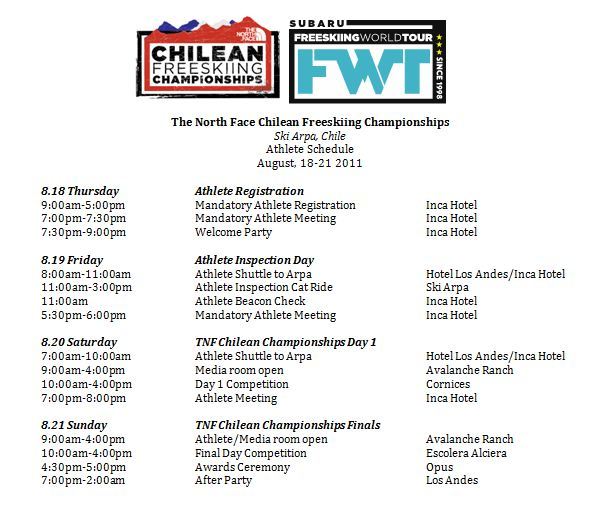 Friday is inspection day at Ski Arpa Cat Skiing where conditions couldn't be better. We're expecting anywhere from two to four feet of new snow on the venue and, unheard of in the Andes, the wind wasn't blowing at all today.

"Tomorrow we'll be moving people from Los Andes to the Andes," continued Barlow. "A wagon train of athlete trucks, staff Subarus, and shuttles will head up the most challenging roads we've ever seen on the FWT starting early Friday morning. This is true backcountry in every sense of the word.

"This is going to be the most exciting event we've ever put on," said head judge Jim Norm Jack. "We're going to an incredibly remote place. Everybody needs to be on point, have a positive attitude, and make this a team effort."

Bottomline is the snow is deep, the team is in place, and the athletes are here and ready to get down to business.