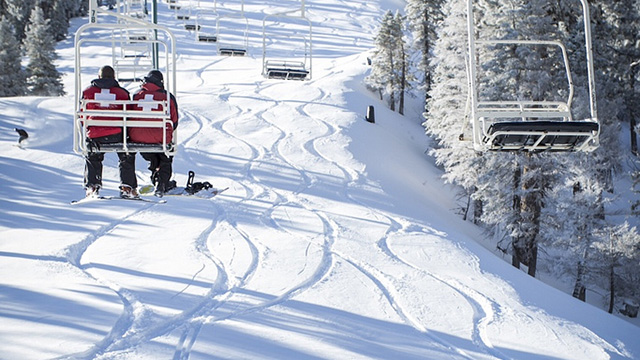 Nothing could keep Big Bear shredders indoors when a mid-February blizzard dumped two feet of pow on the Southern California dome – even a deadly manhunt for murder suspect and former LAPD officer Christopher Dorner.

Big Bear residents were put on high alert as schools closed, resorts shut down, and local shops locked up once the hunt for Dorner moved from Irvine to the mountain town above Los Angeles. Despite the warnings that the fugitive had stowed away in a cabin in the woods, Bear Mountain only shut down for one session. A thousand feet below, Snow Summit didn’t even blink an eye and carried on business as usual. With a record single snowfall of the season, mother earth’s gift of 24 inches overruled any fear of a convicted felon on the loose.

Dorner was suspected to have launched a killing spree that allegedly began on February 3rd in Irvine. Four days later, Dorner’s burned out truck was discovered in Big Bear Lake, commencing a six-day manhunt. Found barricaded inside a cabin on February 12, authorities tried to smoke him out with pyrotechnics. The cabin caught fire and Dorner’s charred remains were identified a few days later.

Throughout the ordeal, Bear Mountain offered a constant stream of updates on the status of the mountain on their homepage.

Despite the media blow out over a mountain lockdown, skiers and boarders continued to chase down fresh powder in the wake of magically clear conditions.

Closing only for a single afternoon session on precautionary terms, Bear continued to operate with all runs open and their legendary fully loaded park – including the big girl and boy playground, Red Bull Plaza. The Plaza provides an urban oasis for expert riders with 32 foot stairs, K-rails, a billboard wall ride, and a marble ledge, just to highlight a few.

The nonchalant tone on the mountain amidst national anxiety aligned with the essence of skiing and boarding. Sports so reliant upon Mother Nature to deliver opportunity, especially in a region like Southern California, cannot afford to waste a single snowflake. While tense vibes certainly permeated the community of Big Bear, on the mountain it was the crisp wind, the perfect sun and the smell of a fresh layer that reigned supreme.