Inside the Mind of Alex Yoder 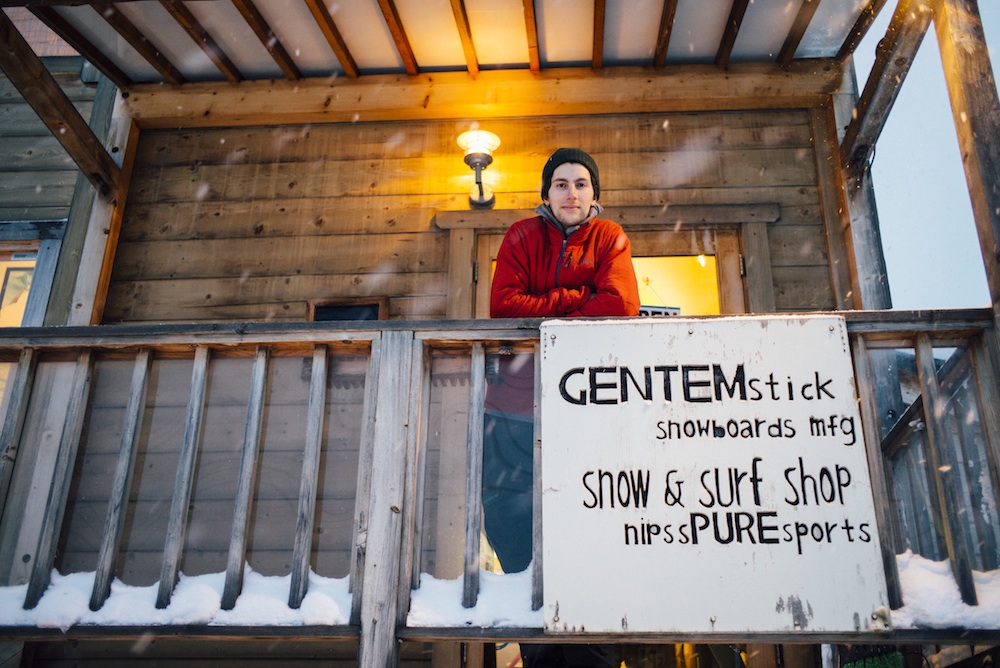 Patagonia snowboarder Alex Yoder is doing something very unique in the world of professional snowboarding. He's diplomatically doing what he wants, without ploying for sponsors, Hookit scores, film parts, and Instagram followers. He travels the globe, experiencing as much of each country's culture as he does the snow. Last year, he left Jones Snowboards to become the only American on Taro Tamai's Gentemstick team.

We caught up with Yoder this summer while he was home in Jackson. Here's his story.

Coming up in Jackson

I was born in Marin County. My parents had been visiting Jackson a bit. On a whim, we moved here. My parents wanted to raise me and my siblings somewhere other than Marin County. We moved into bed & breakfast five minutes from the ski resort. I was 11 years old. I had snowboarded a couple of time before. We would go up to Tahoe to ride about 5 days a year. Then once we moved here, I rode every day. I tried to ride snowbanks and rails In the driveway and yard. I was pretty addicted once the snow was available.

I was competing a bunch when I was in middle school and high school. I did USASA halfpipe and slopestyle, but I was never going to go anywhere. When I was 18, I got a job washing dishes at Alaska Rendezvous in Valdez. I was up there for two months that winter.

It was the most eye-opening experience, riding 3,000-foot, steep, open runs. It inspired me to make professional snowboarding happen. I was like, ‘Okay, let’s figure this out. I have to get paid to do this. I have to make this lifestyle option open to myself as much as I can.’

The Unlikely Road to Sponsors

I did three years of The North Face Masters. I got the Young Gun award and a couple of podiums. Being a part of that opened up some doors. I made good friends with Aaron Robinson, and we worked on a movie project, Manifest. It was the first real dedicated season I spent filming. We basically cruised around WY, MT, and WA all winter, and then Aaron passed away a few months later in Chile. We all went down there. We finished the movie for Aaron. He was the most incredible, charismatic, hilarious, talented snowboarder. With his passing, it really amplified what that movie meant. It was a tribute to his life, and his place in our community.

It’s a funny story how I joined the Jones team. I was at SIA. I didn’t expect to pick up a sponsor. I was just walking around. It was the first year that Jones had a booth. Jeremy was talking to Jessie Brown from Jackson Hole Snowboarder Mag, and asking him about up-and-coming riders from Jackson. I was walking by, he pointed at me and introduced me. Jeremy ended up getting me a board later that season.

The Patagonia thing was similar. I was in Chile, and ran into Josh Dirksen who had just signed with Patagonia. He was doing product testing. He encouraged me to send an email to Patagonia and see where it goes. All of those interactions have happened naturally.

A Shift in Risk Management 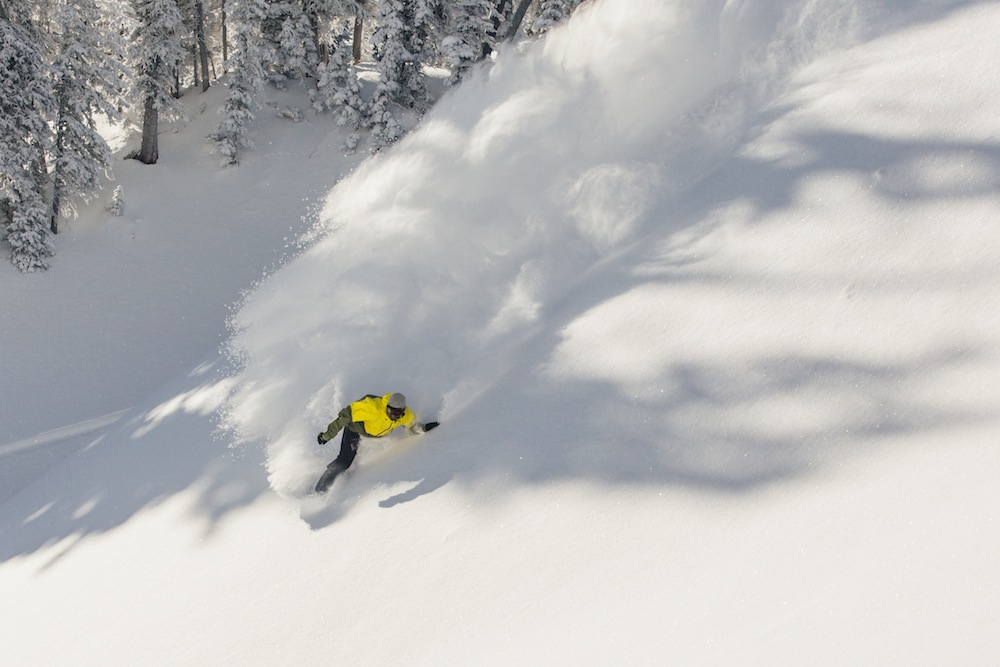 After Manifest, I had an idea in my head that I have to follow the typical beaten path of a professional snowboarder, film a video part, do bigger, badder tricks every year. That was the whole route. The season after Aaron passed, all of us were frazzled and didn’t do much other than just go ride. The next year Lucas DeBari came up with this movie called Go. It started out as a snowboard-road-trip-mobile film with little emphasis on getting extreme, but it turned out that we got pretty serious, and we wanted to hit bigger jumps.

It was kind of like a pinnacle moment in the season. I undershot a big jump, hit my jaw on my knee, got a bad concussion, and didn’t snowboard for close to two weeks. I had crazy mood swings and realized how much worse it could have been. There was one moment I was like, ‘Fuck, is this really worth it?’ For the rest of that season, I was thinking, ‘What I am doing, is this going to be my life?’

The following season I was at Dirksen Derby. Rip Zinger was riding a tiny little 142. I had never seen anything like that before. We’re both goofy, and we switched boards.

It was a life-changing moment, I had been riding the same run all day and as soon as I dropped in on this board it felt like an entirely different mountain. It’s a whole different way to experience snowboarding. Based on what you put on your feet and your perception, you can totally change your experience. 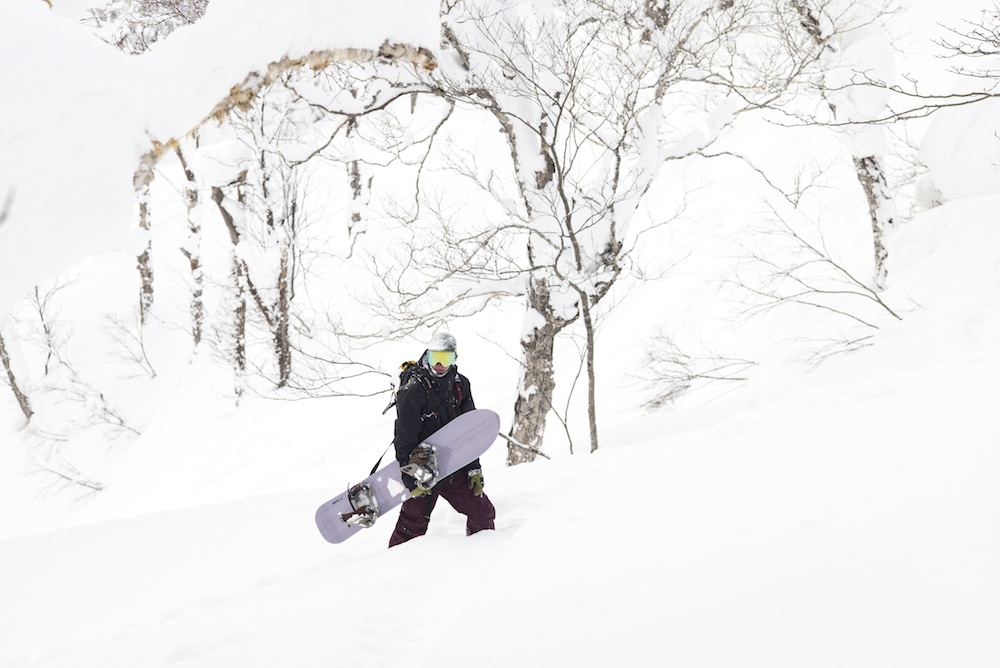 I made good friends with Rip. Later that winter, I was going over to Japan with Drink Water crew. They were working on Pathology. I booked a ticket to hang out a week longer to with Rip and Taro Tamai. At the end of a week of riding with them, they asked me to join the team. But I couldn’t at the time because of my commitment to Jones Snowboards. 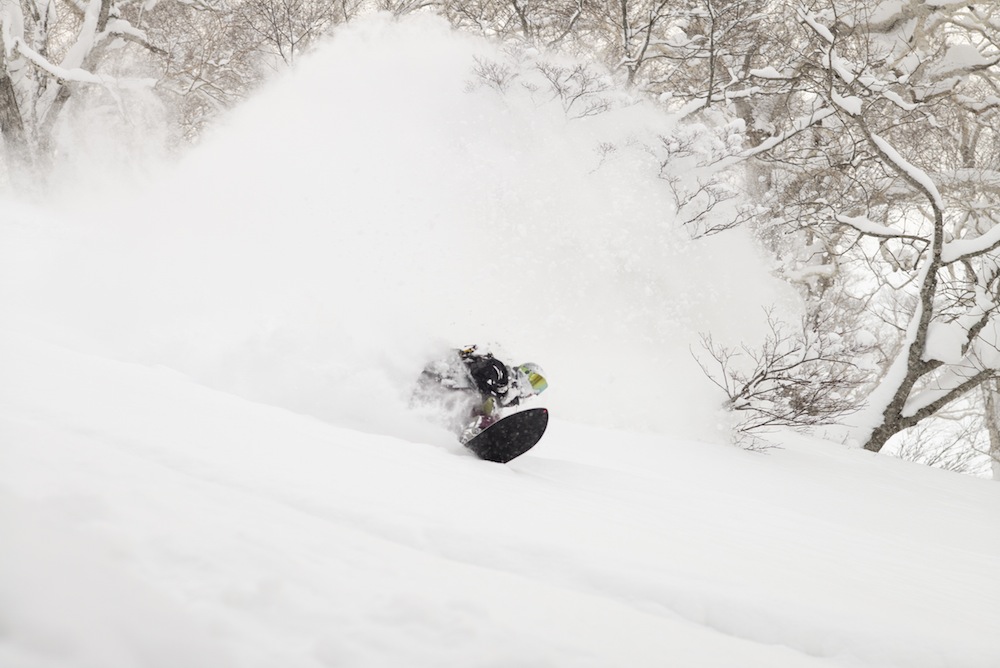 It’s funny to say that your board sponsor can change how you ride. Something about Gentemstick is so special. The philosophy and energy behind the brand is way more in synch with what I want to do.

Growing up in Jackson, you’re sort of shot out the cannon of what is available. So you want to go as fast as you’ve ever gone in your life today? You can–inbounds. You want to hit a 50-foot cliff? You can do that–inbounds. So your turning skills build quickly because you need to hold an edge in steep, inbounds terrain.

Lately my quiver has had boards any from 140 to 180. Every day can be an entirely different experience. Jackson can be a great mountain to do that. I wake up, and think, ‘What kind of mood am I am in today?’ If don’t feel like getting super-extreme, I can take a 144-swallowtail to Casper lift. I can have fun on an intermediate groomer, the same run a family from Michigan would ski.

It opens up under-considered spaces on the mountain, space I would by-pass to hit a jump. Now, I ride a little bit different board, and runs that I didn’t even look out have become some of my favorite runs.

It’s been a revival of enjoying Jackson to its fullest in a new way. I’ve been thinking, ‘Okay, I got a new flow here.' 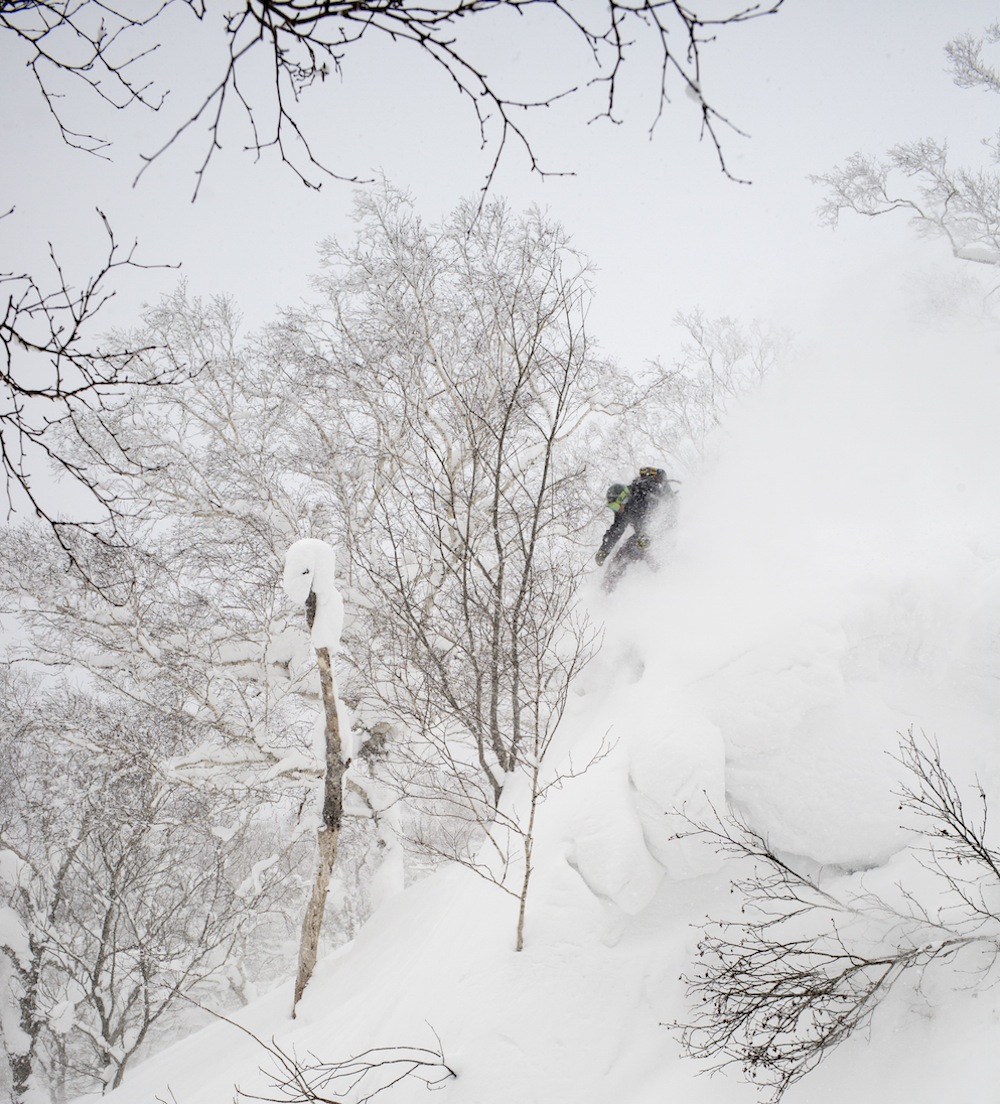 Sending it through the trees. Wade Dunstan photo.

I guess I’ve always been pretty logical. I’ve kind of been able to assess risk, and air on the side of safety. I’m not super-reckless. I can be reckless at times, for sure. But I’ve been really privileged to hang out with certain people over the years who’ve helped me understand mountain awareness, especially Bryan Iguchi. He imparted his knowledge and general Zen wisdom on me. During my first few years filming, he really encouraged me to get my Wilderness First Responder certifications and avy classes.

Snowboarding has been growing super-quickly. That’s been given people more motivation to try things in films. The adrenaline rush from cheating death is addictive. The way content comes out, literally in your pocket, so many more people are psyched to get out there, so there are better odds for higher statistics when it comes to accidents. There’s also a lot more freedom of interpretation about how you want to set your course. I want to do this for a long time, so I’m doing my best to consider that when I’m deciding whether or not to put myself in a dangerous situation.

In my off-snow life, I made it a goal to stay in Jackson this summer, except for the Rat Race at Mt. Hood. I have been traveling so much for the past six years, and not being in one place for more than five weeks. I’m gardening, and enjoying being at home. 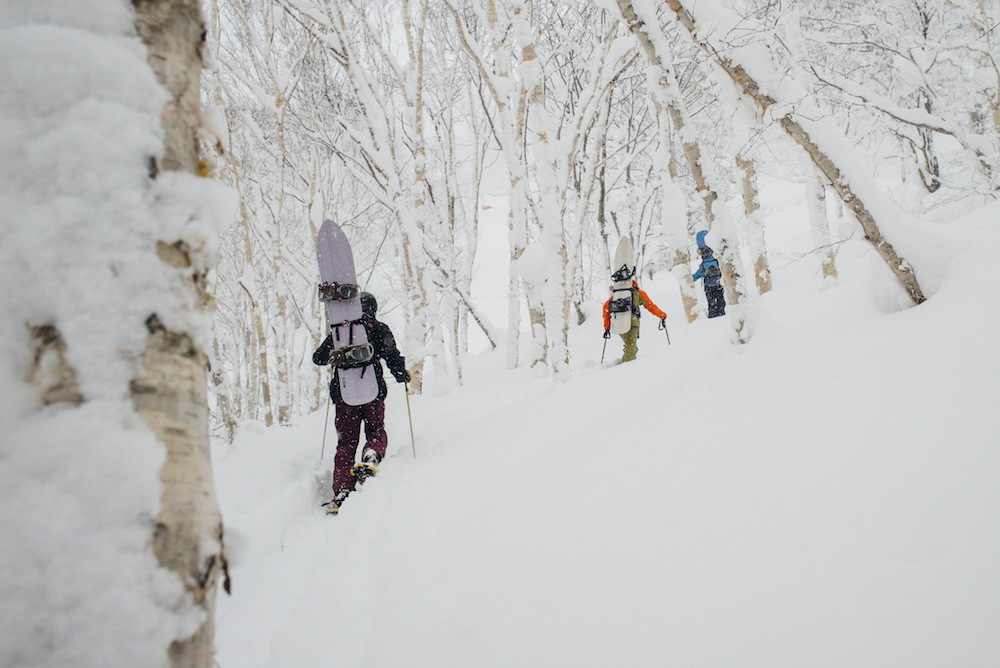 I feel like it’s easy for us to become a little over-committed to our passions. Snowboarding for me is the best thing in the world to do, but there are a lot of other experiences that are worth trying and a lot of lessons to be learned outside of snowboarding.

I’d say I have a pretty loose program. The season before last, it was first time I went to Japan. I was with a bunch of Americans. We were existing in our little American bubble, really a rental van. We weren’t immersed in the culture. We weren’t trying to understand customs. Then everyone left, and I hung out with only Japanese people, and that was what I was waiting for. I came back to Japan a few weeks later to work on a Patagonia project. Taro’s philosophy, the Niseko style of riding–I fully fell in love with that. 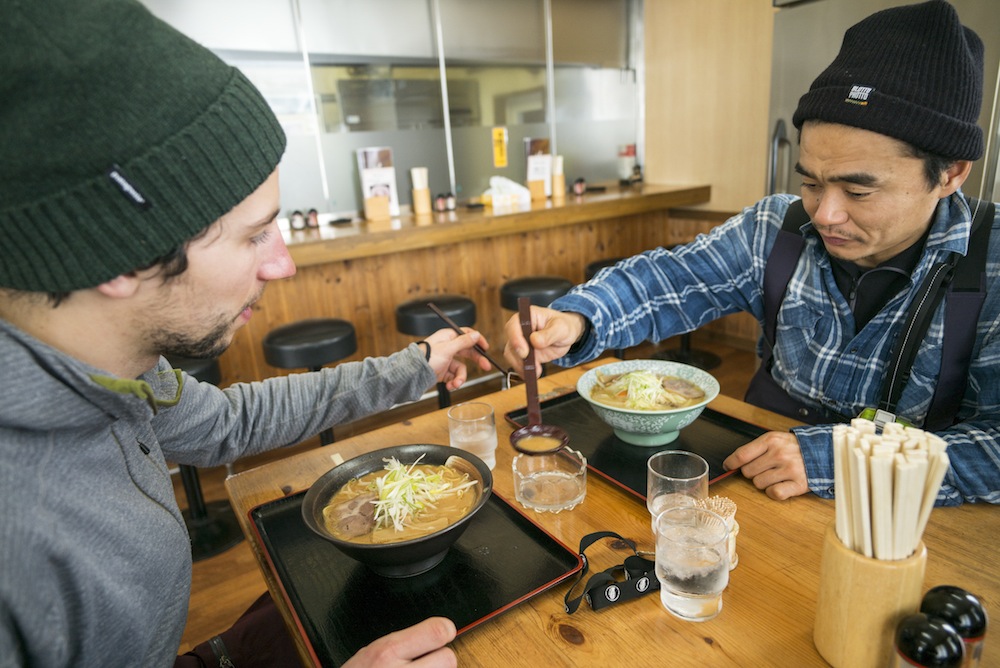 When this year came around, I knew I had to go back. I can fully fall in love with certain places: Jackson, Alaska, Japan. There are a lot more love affairs to have out there. I constantly want to experience new places. Snowboarding is a really great career to be able to say, ‘Hey, let’s do a trip to, Kazakhstan.’ and then you’re there a couple of weeks later. The program, I guess, is just rip around, ride the wave, set some goals and see where it goes.