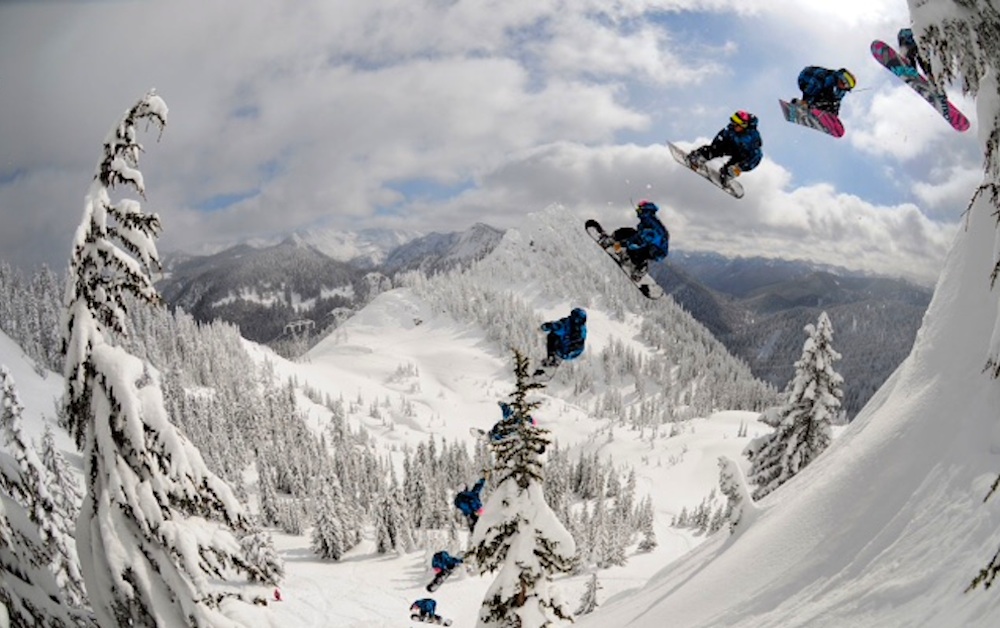 Imagine this: you shred so hard and know the Stevens Pass backcountry so well that an old school crew recommends you to the Absinthe Films crew, who is there filming their next movie. The gig goes swimmingly. The Absinthe crew invites you to ride and film with them in again Alaska. You fly to Juneau. The weather sucks. You and the Absinthe crew fly to Haines. There you meet Gigi Ruf, who is filming with Pirate Movie Production. Gigi’s crew has an extra seat on his heli. Now you’re filming with Gigi. And you’re filming with Absinthe. You join Gigi’s Slash Snowboards team, and get picked up by Nike and Monster.

That story might sound like fantasy, but it’s actually how Chilean snowboarder Manuel Diaz quickly infiltrated the otherwise impenetrable world of snowboard filming. Now, a go-to rider for both film crews with multiple full parts under his belt, Diaz snowboards (and surfs) half the year in Chile and the other half in Washington and Alaska.

We caught up with him in Santiago recently to ask about how his manages a bi-hemispheral lifestyle, what the scene is like in Chile, and where he likes to shred when he’s home. If you aren’t seething with jealousy yet, please continue reading. 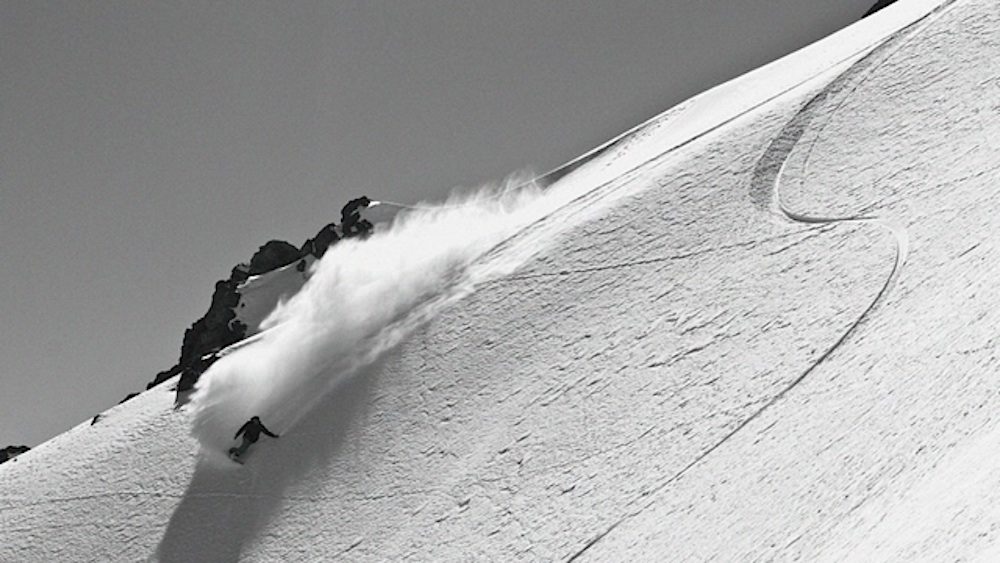 You go back and forth between El Colorado in Chile and Stevens Pass in Washington. Can you describe how that happened and what each experience is like?

I’m from a little town in the mountains, Farallones, which is about 40 minutes from Santiago. I started freeriding there when I was 13 or 14 years old. It was like huge playground right outside my house. There are still so many things I haven’t done there. It’s kind of like the Alps. It’s an alpine zone. 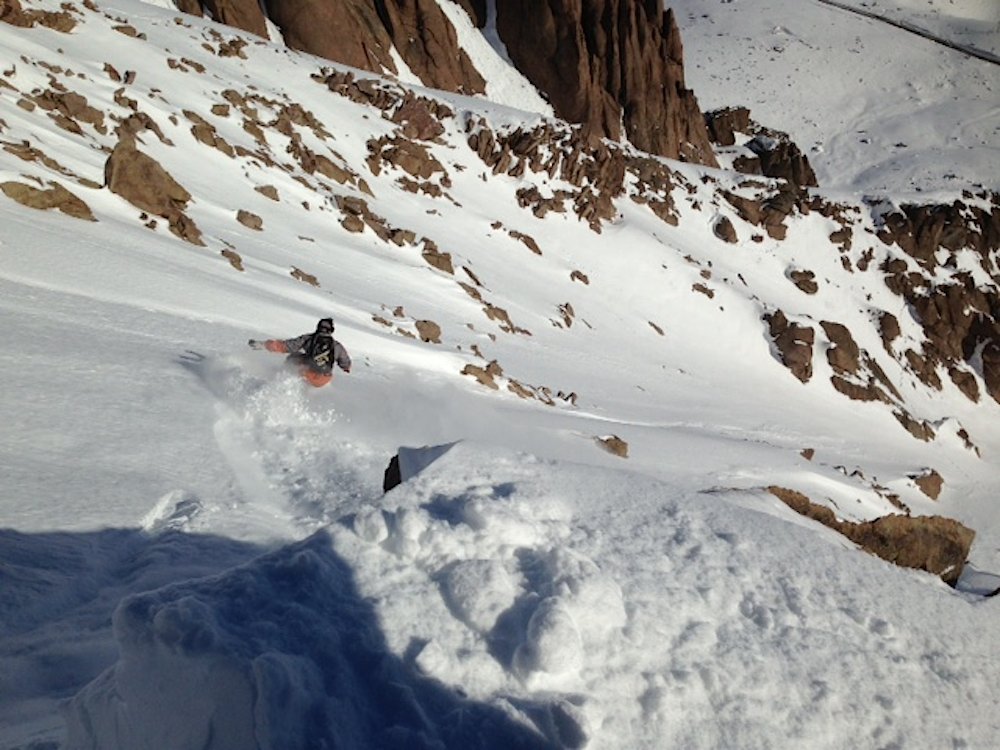 I have been going to Stevens Pass since I was 15 years old. Stevens Pass is all about hiking and finding your own path. The terrain is so much more technical there, so it’s a good compliment to Chile.

At Stevens Pass, you get to the top of the mountain, hike 10 minutes, and then you are on top of insane Alaska-type features. We always ride the resort first–we call it ‘Around the World’–then we start hiking. You drop here, you drop there, and they are two totally different lines. The terrain changes so much. You only have to hike 150 feet to find a different feature or a face you want to drop in. It’s the best place to warm up before you go to ride AK.

What is the local snowboard scene like down there?

There used to be a strong crew here from La Tabla magazine. They used to make movies. I grew up with this crew. That was my beginning and where I started filming. They were making these badass movies, and I watched them a thousand times. I looked up to them. They allowed me to ride with them and build jumps with them. But when we get to big lines, they would send me home, because they said they didn’t want to deal with my parents if I got cliffed out or hurt.

It was a crew of maybe seven people. They helped me get my first sponsors. There’s random kids now, but they don’t really understand what came before them. They like to receive everything on a plate.

There are little crews these days. I ride lines every day with two other friends. It’s cool to see where everyone rides, and hear over beers which lines they rode and how many they got. There’s another crew of little kids spending time in the park, doing laps. There’s a pretty strong, little circuit of contests. They are pretty serious about them. I used to do contests. They used to be better–more money, better jumps. Maybe I just grew up.

The park scene is strong in Valle Nevado and El Colorado. When snow isn’t that great, I take laps. I always tell the kids to make movies, to put something out there. I’d like to see them doing something for their crew and to show people what they’re doing.

If people were going down to Chile to ride, where should they go? Can you give us some beta? 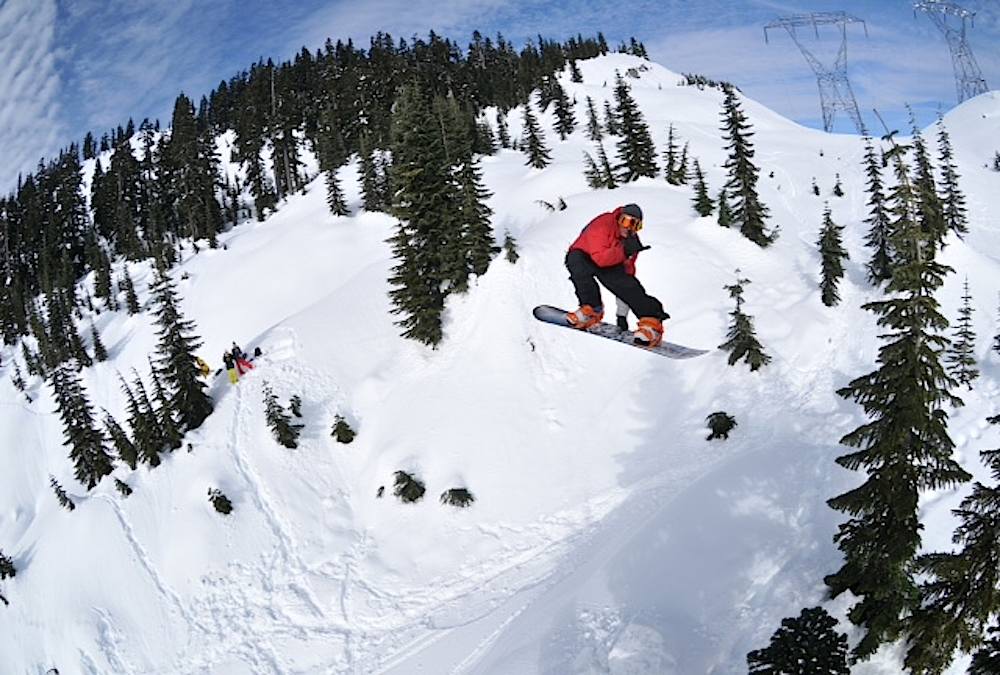 Here, you can go up to Farallones, El Colorado, and Valle Nevado. They have a lot of freeride potential inbounds. You could also to south to Chillán, a four-hour drive, or Pucón, an eight-hour drive. They’re lower elevation but really fun terrain. Chillan has the most inbounds potential for mellow freeriding.

I’m kind of stuck in a bubble here [in Farallones] with all of these beautiful things.

Portillo has really good steep terrain. You don’t get to the summit though, so you feel like an ant in a glass of water. You can’t reach the ridge at the top, and you feel kind of bummed about that. But you can go on long traverses out to these lines and there’s some cool chutes. You can ride one side in the morning. When it gets sun-baked, you can move to the other side. That’s the cool thing about it. It’s like a huge, massive halfpipe.

The snowpack here is pretty stable. The temperatures stay pretty low, and the snow sticks pretty quick. It’s not really avalanche prone. The snow stays really cold for a week. It’s like a refrigerator up there. Even on a sunny day, you will stay cold.

There’s a lot of wind. Mostly from the north. It blows snow more to one side than the other. Rocks are the main issue. It can be sketchy right after a storm.

Getting cliffed out, that’s a big one, too. There’s a lot of exposure. You gotta know where the wind blows. Sluff, not so much. 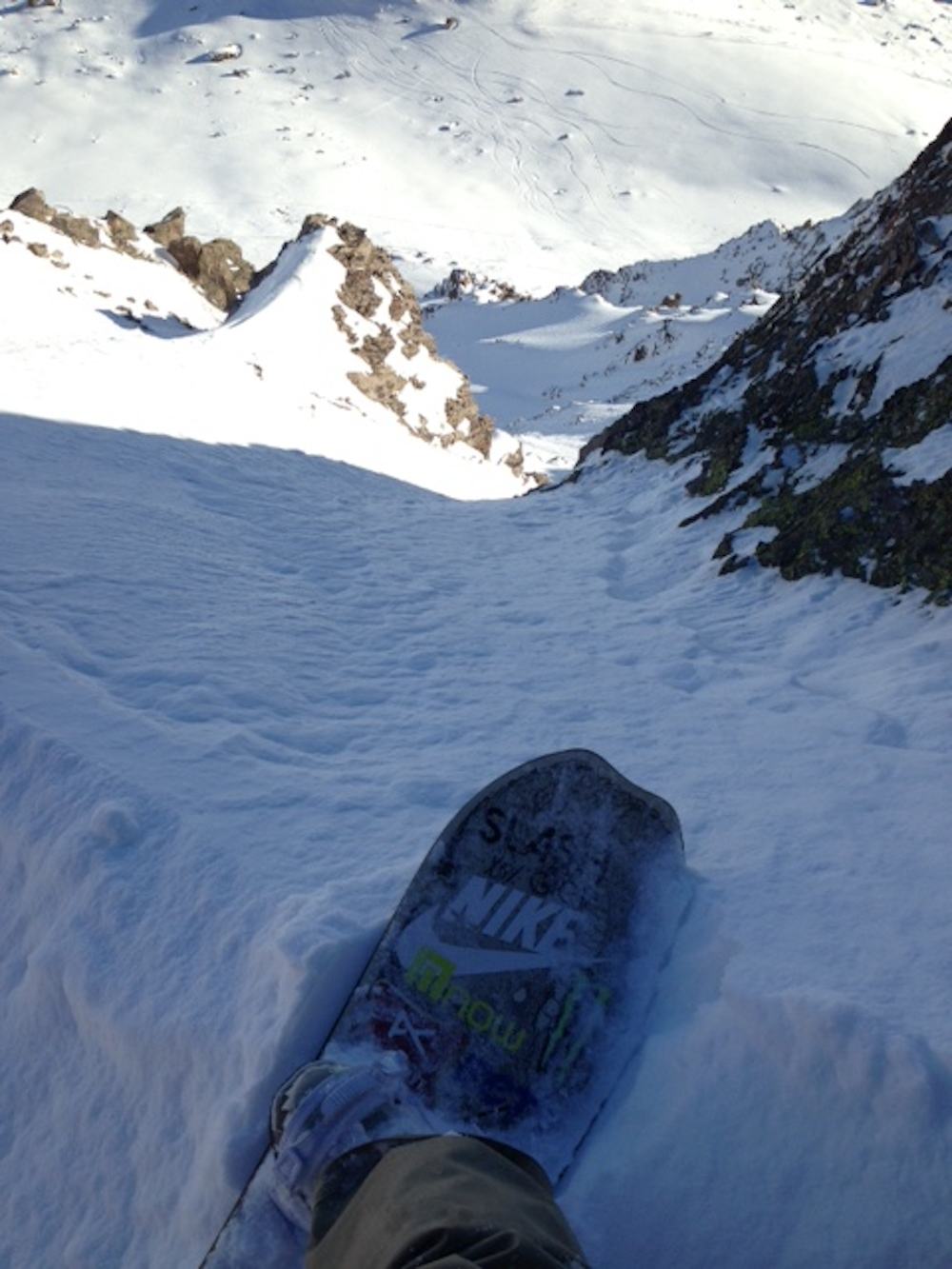 Can you talk about filming in Alaska?

Having down days and then firing and filming there is pretty tough. It’s all a mind trick. You spend so much energy in your head, trying to do the best you can on this line you’ve never ridden before. I want to made it look good after a whole week or ten days without riding on any snow.

It’s kind of cool because you need those days to rest your mind after this crazy energy spent in the mountains. It’s also kind of crazy to sit around to for ten days and then start firing and then hit a huge cliff, or ride a huge line right after breakfast. It’s really steep. It’s really deep. You’re hungry. You’re kind of sleepy. You don’t see that in the movies. You just see the monkey riding down the mountain. But it releases all this energy. It feels great.

It’s really steep. It’s really deep. You’re hungry. You’re kind of sleepy. You don’t see that in the movies. You just see the monkey riding down the mountain. But it releases all this energy. It feels great.

We have crazy moments. One time, we didn’t fly in the whole day. We just had this little window in the evening. The light was just beautiful. I got dropped off with Lucas DeBari. When I saw Jason Robinson get dropped off on a line to my left, a cornice released. There was this spectacular moment when whole mountain was smashing, and the heli was looking for a landing. It was pure energy. The moment was just perfect. Those are the little adventures when you see the whole situation and then you ride this beautiful face.

Afterward, I was so nervous on the ridge. Maybe it is the nerves or fear, but most of the times before dropping on a steep line, I feel like taking a shit on top of the ridge. It is kind of sketchy to have my pants down to my ankles, attached to a little surface with steepness in both sides. But it does feel good and releases the pressure, plus you have the best view for it. 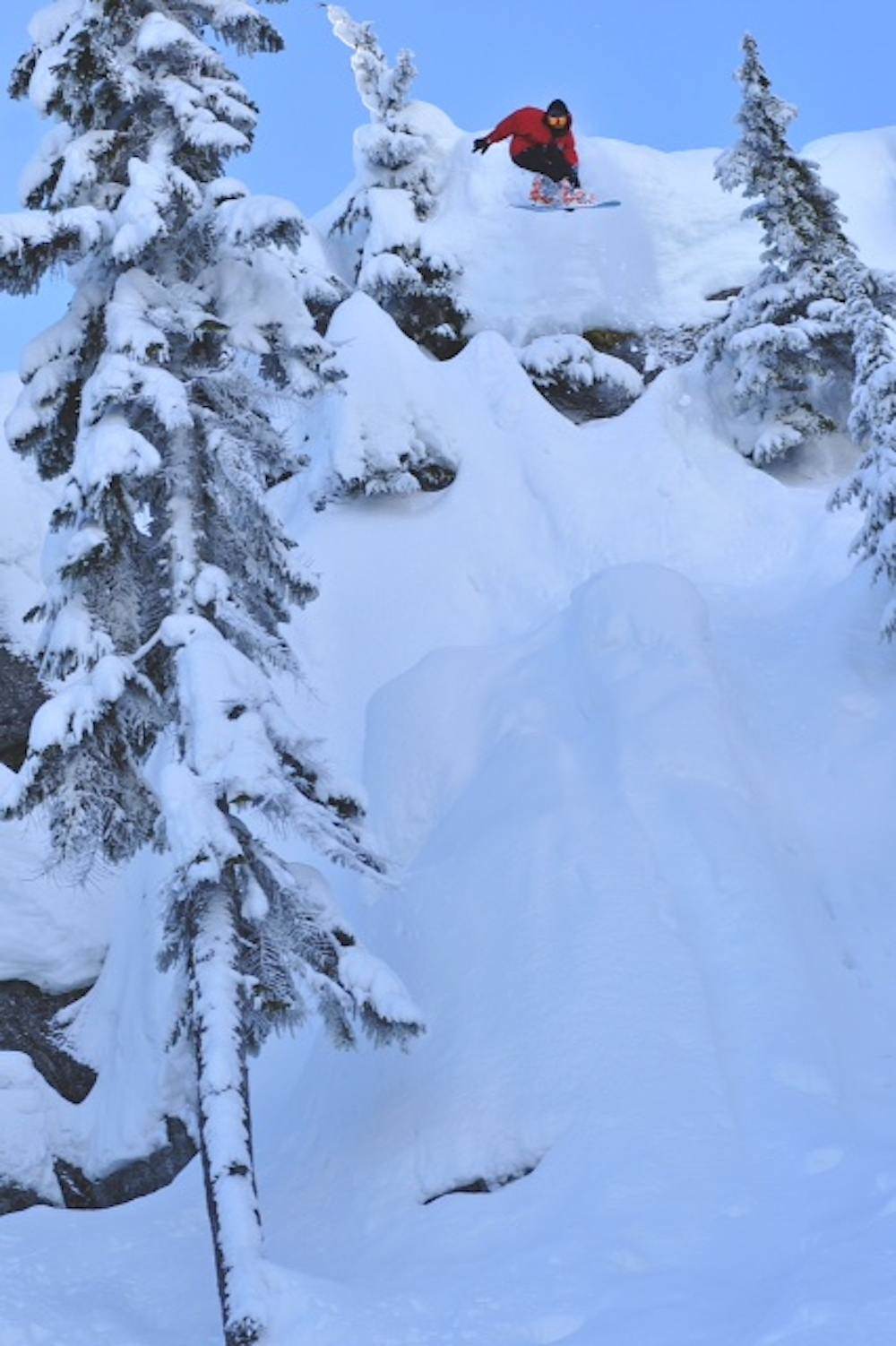 Sometimes you’re waiting for evening light, and then you’re waiting tomorrow for morning light. There are so many facts involved in a mission. Especially this year in Alaska. There were so many down days, and morning missions without evening sessions.

It’s a gamble that we all play. I remember I waited ten days. I was ready to go home, but wanted to do more freestyle things. On my very first hit, I threw a back seven way too big, crashed, hurt my knee, and my trip was over. It’s a game you play between your head and your body to get the line of your dreams.

I was so nervous on the ridge. Maybe it is the nerves or fear, but most of the times before dropping on a steep line, I feel like taking a shit on top of the ridge. It is kind of sketchy to have my pants down to my ankles, attached to a little surface with steepness in both sides. But it does feel good and releases the pressure, plus you have the best view for it.

I’m just recovering. Last week was my first week of surfing. I just got back from a week down south, camping. Surfing here is so close, like three hours. It’s a good compliment.