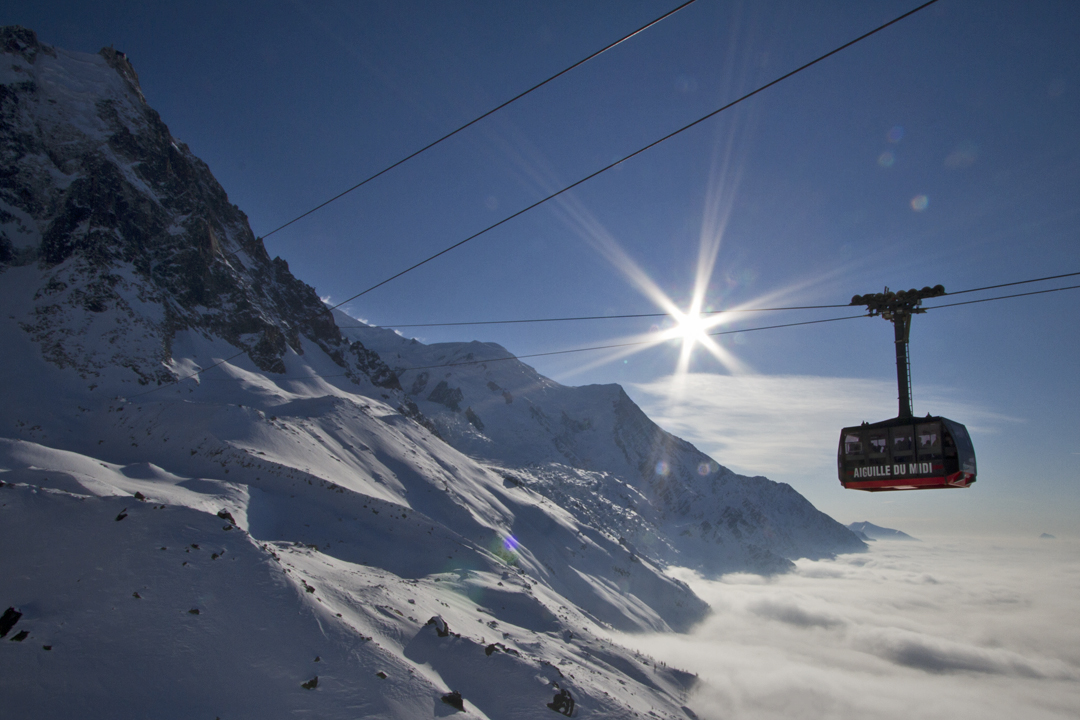 Oh, the places you’ll go...in a gondola! Cable cars the world over deliver incredible ski descents but not all trams are created equal. Between the improbable alpine perches they occupy and the insane terrain they access, gondolas in the European Alps are widely regarded as the most spectacular cable cars known to man.

On a recent trip to the Alps I fell in love with several of these legendary téléphériques. I was in awe of both the triumphant locations that the bubble lifts attained and the reality that once you stepped out of the gondola doors you were free to ski or climb anywhere you pleased. In celebration of these amazing ski lifts I’ve put together a three-part photo essay documenting some of the classic gondola accessed terrain in Verbier, Chamonix and St. Anton. Read on for part two of the series detailing the radical cable cars that ascend the flanks of the Mont Blanc Massif in-and-around Chamonix, France. 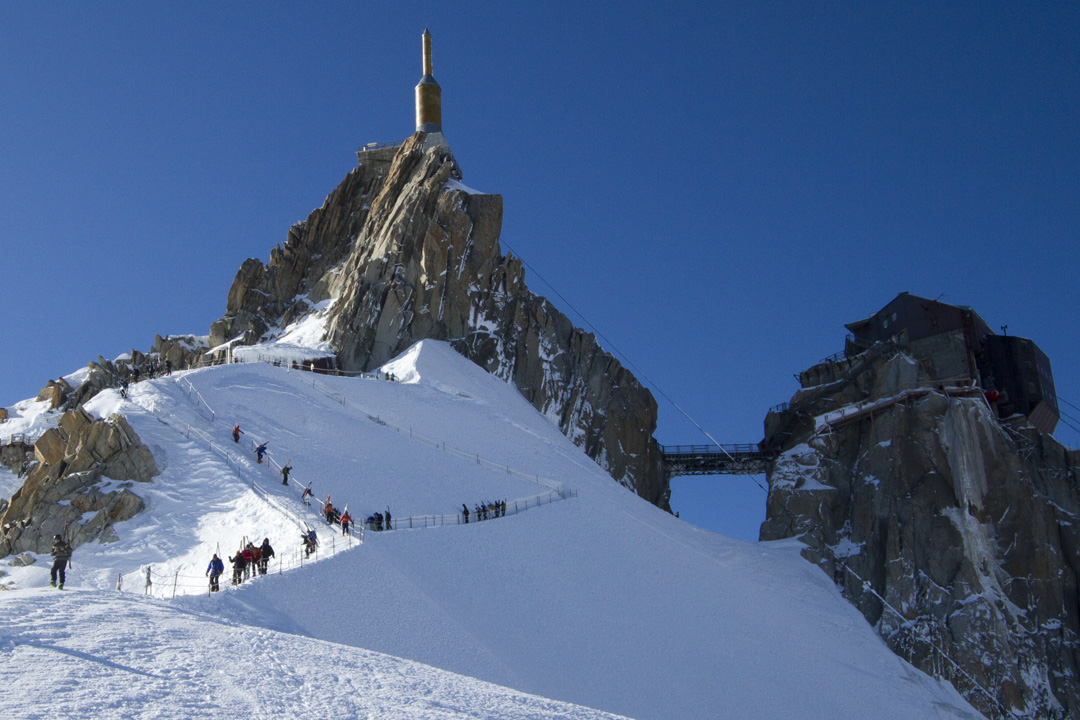 Chamonix is home to arguably the most famous gondola of them all - the Téléphérique de l'Aiguille du Midi. This two-stage tram holds the record for the highest vertical ascent cable car in the world as it climbs 9200 vertical feet above the streets of Chamonix before dropping off passengers at the top station at 12,400 feet. The second stage of the gondola arrives at the station on the right side while the rock outcrop on the left contains an elevator to the summit and a tunnel entrance to the chopped ice paths down the arete that access the Vallée Blanche ski route. The switchbacked path on the right is a new addition having been chopped out this winter. 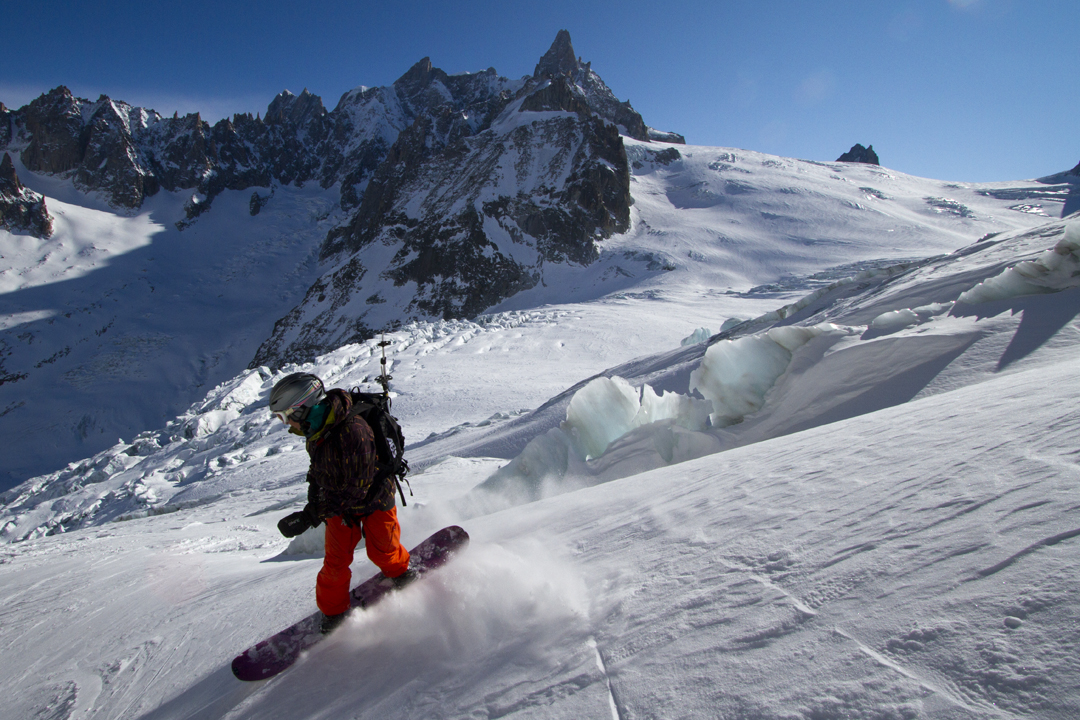 The terrain accessible from the top station of the Aiguille du Midi is as wild as it gets. It’s a candy store of close-out faces, steep couloirs and more moderate glacial tours. Not every line is ridiculously steep but every line cris-crosses crevasse strewn glaciers making even the low angle routes exhilarating. Variable snow conditions kept us off the steeps so we rode an alternative entrance to the Vallée Blanche that slid us past massive seracs as it dropped 13 kilometers down to town. 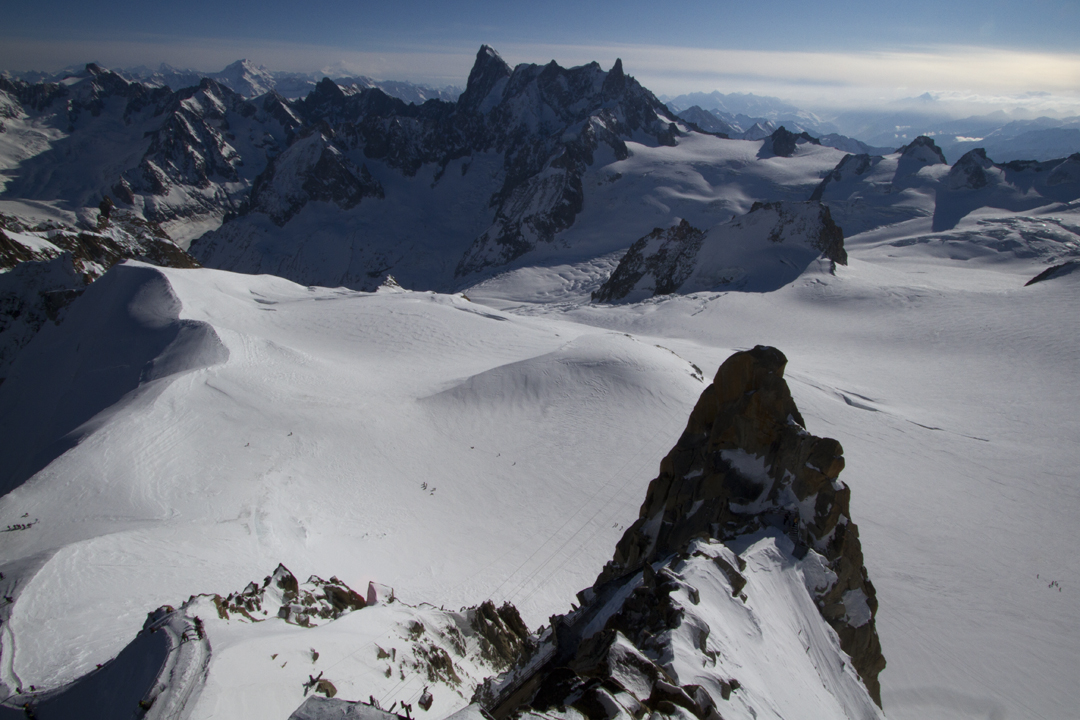 Here you see the Geant Glacier from the summit of the l’Aiguille du Midi. The Vallée Blanche route starts at the bottom left of the image and descends to the right across the glacier into the valley that drops out of view. If you look closely you can also see a gondola car hanging just left of the rock outcrop in the foreground. This gondola links over to the Funivie Monte Bianco cable car that ascends the Italian side of the Mont Blanc massif. The top station of the Funivie Monte Bianco is called Pointe Helbronner and is located on the second bump on the horizon from the right, just below a pyramid shaped peak in the far background. This interconnecting téléphérique is only open in the summer. 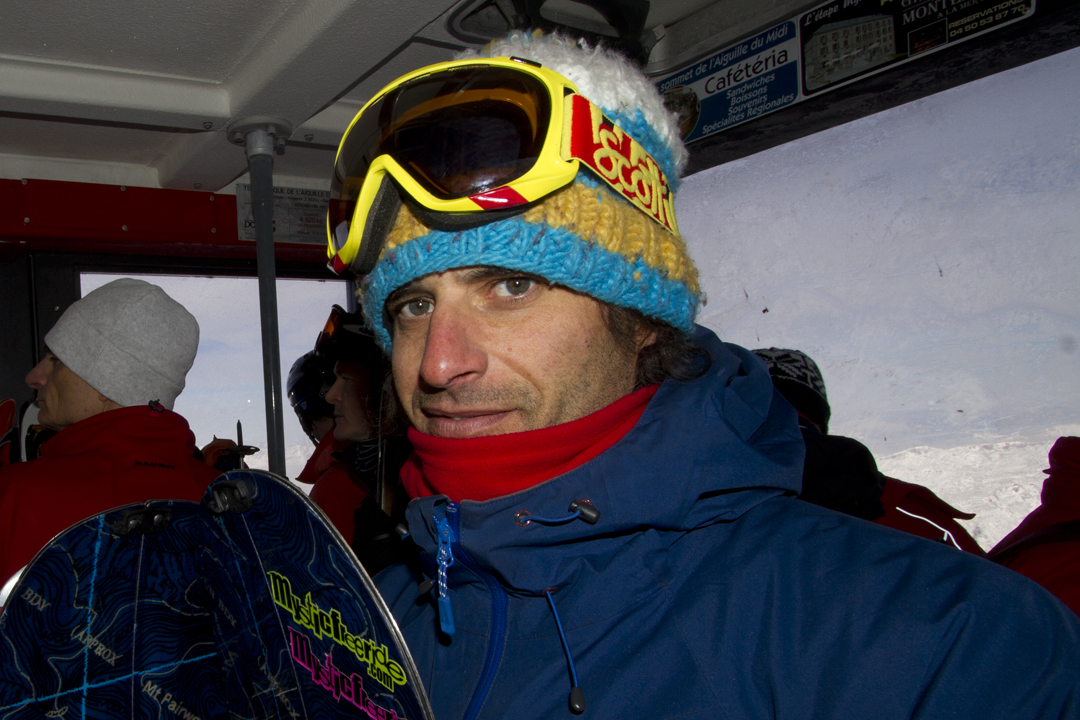 Boss snowboard mountaineer and Chamonix local Luca Pandolfi has been shredding lines off the Aiguille du Midi for nearly a decade. We were honored to spend a day on the glacier with him and slay two fantasy descents touring from both the top station and the middle station. If you like to read trip reports about lines in the Alps you probably don’t have the balls to ride, check out www.lucapandolfi.com 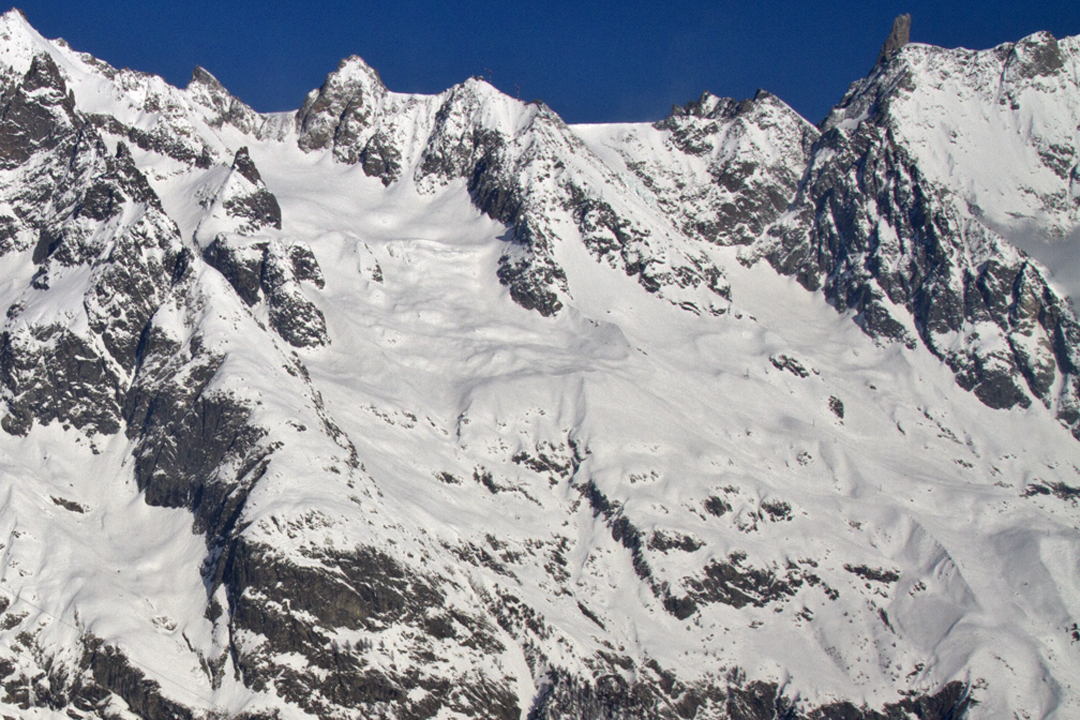 This massive face is a small section of the Italian side of the Mont Blanc massif as seen from the Courmayeur ski resort. The Funivie Monte Bianco ascends the face through the open snowfields going from right to left and tops out at Pointe Helbronner, two bumps on the horizon to the left of the corniced flat section in the center of the image. The glacier on the lookers left side of the gondola line is the traditional Helbronner ski descent. This zone is Luca’s home turf but he told me to tell you that the terrain is terrible and the coffee sucks in Italy so don’t bother travelling through the Mont Blanc tunnel to ski the Helbronner. 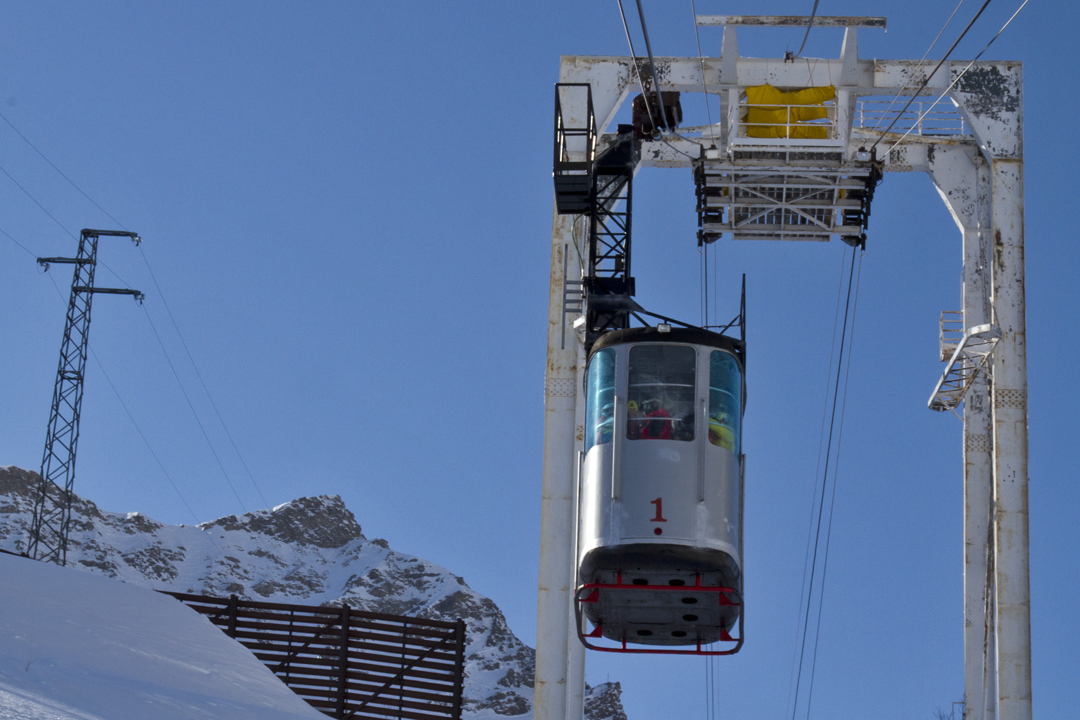 We didn’t have a chance to ride the Funivie Monte Bianco to the top of the Helbronner but we did get a taste of the Italian gondolas at Courmayeur ski resort. The two old school bubbles at the top of the resort were pretty rad as they accessed neighboring valleys dropping both north and south off the back of the resort. This bubble was called the Youla. 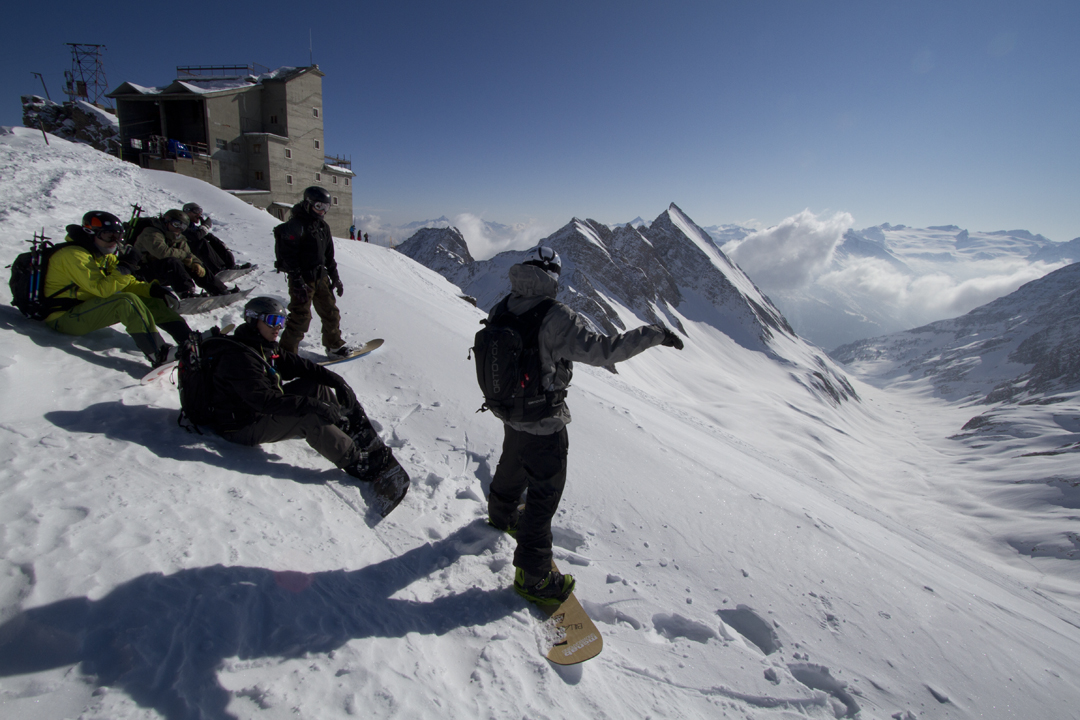 The fortress in the background of this shot is the top station of the Arp cable car and the highest lift accessed point of Courmayeur. We joined Chamonix snowboard guide Neil McNab’s Backcountry Splitboarding course for a day of touring around Courmayeur. Our crew dropped down a north facing valley behind our backs in this shot. If you’re a snowboarder and are interested in exploring Chamonix for a week with a legendary guide, check out www.mcnabsnowboarding.com. Neil runs backcountry snowboarding courses for various ability levels all winter long. 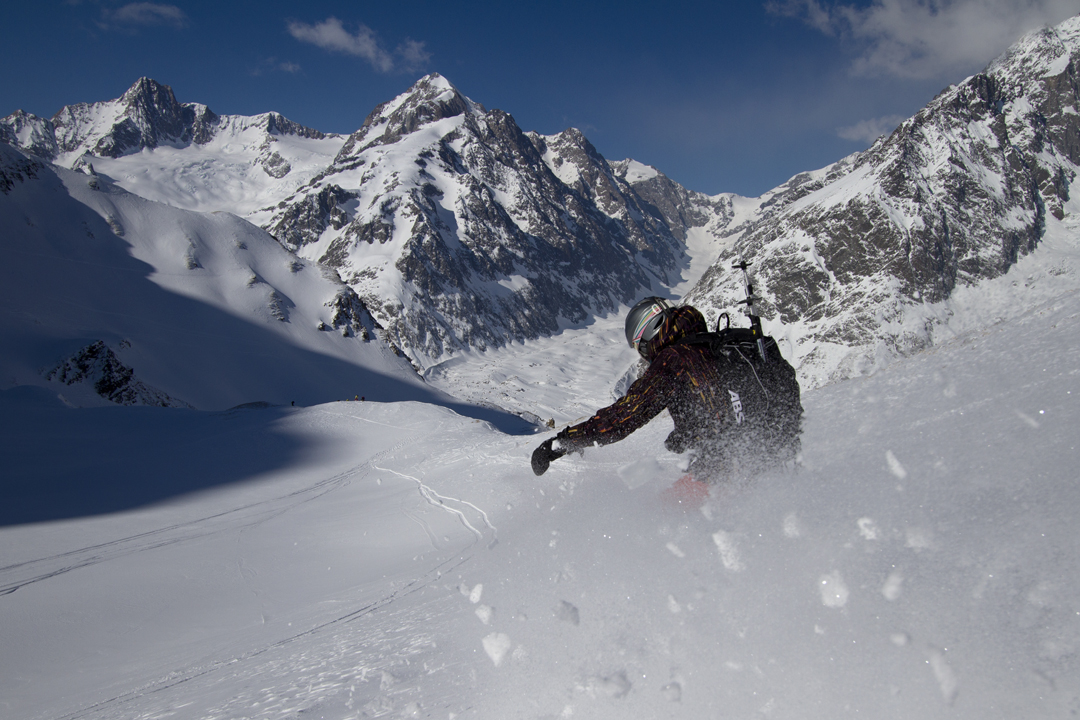 And once again, what it’s all about. Gondolas in the Alps get you to the pow! Allison Lightcap slashes through Italian alpine fluff on her way to a cappuccino and a couple gulps of grappa at a cafe around the backside of Courmayeur.

Look out for the final chapter - Great Gondolas Of The Alps - Part Three: St. Anton dropping next week!

Check out Great Gondolas Of The Alps Part 1: Verbier here.