Going Back to the Pass: Shredding Summer Lines in the Beartooth Mountains, MT

After a long work week, Nolan, Logan, and I (Matt) finally got some days off of work from the kitchen, and we decided to take a three day trip up to Beartooth Pass to get some lines in. When we first arrived, it started dumping rain so we opted to set up camp and save the shred for the next day. 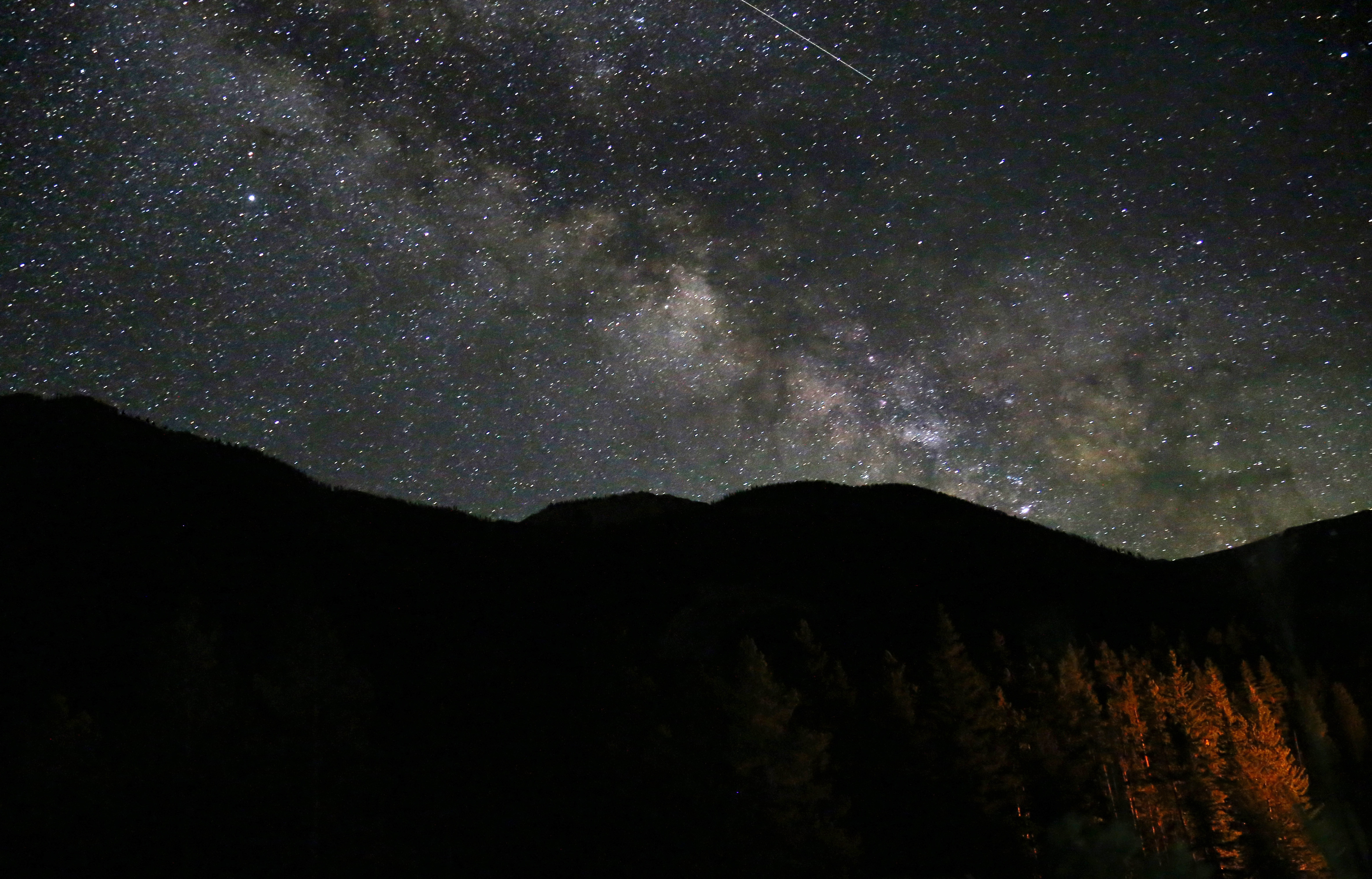 We woke up, strapped up, and headed on out. Our photographer, Logan, dropped us off near the pull off just past the Beartooth Loop sign, within the first two miles after you cross into Wyoming. We had a little bit of a hike across the flat rocky part of the plateau before we arrived at the bowl we wanted to ski.

We then walked along the ridge of the bowl and stopped at the top to gauge the size of our line. We totally underestimated how wide it was. It seemed like this narrow little chute that would be a squeeze but ended up being wide enough to rip huge turns in. The cornice was also easily two to three times bigger than we thought it was from the road. 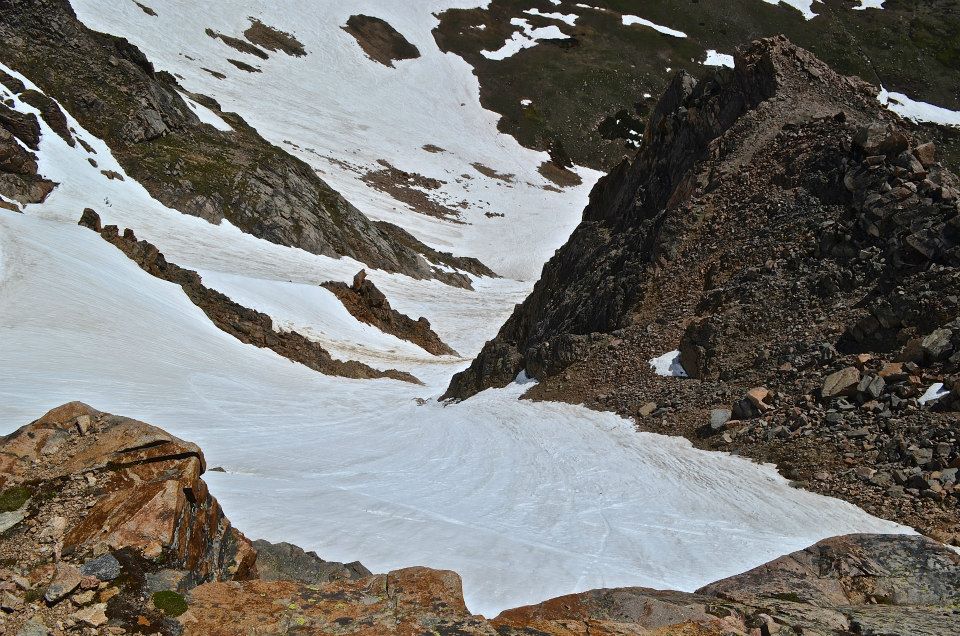 A shot of the shoot from up top. Photo by Nolan Blunk.

I dropped in first into the shoot. The snow was super wet and fast, and the rain from the previous night had left little gullies in the snow. The top was super nice and corny and every turn just sent these huge rooster tails trailing behind us. 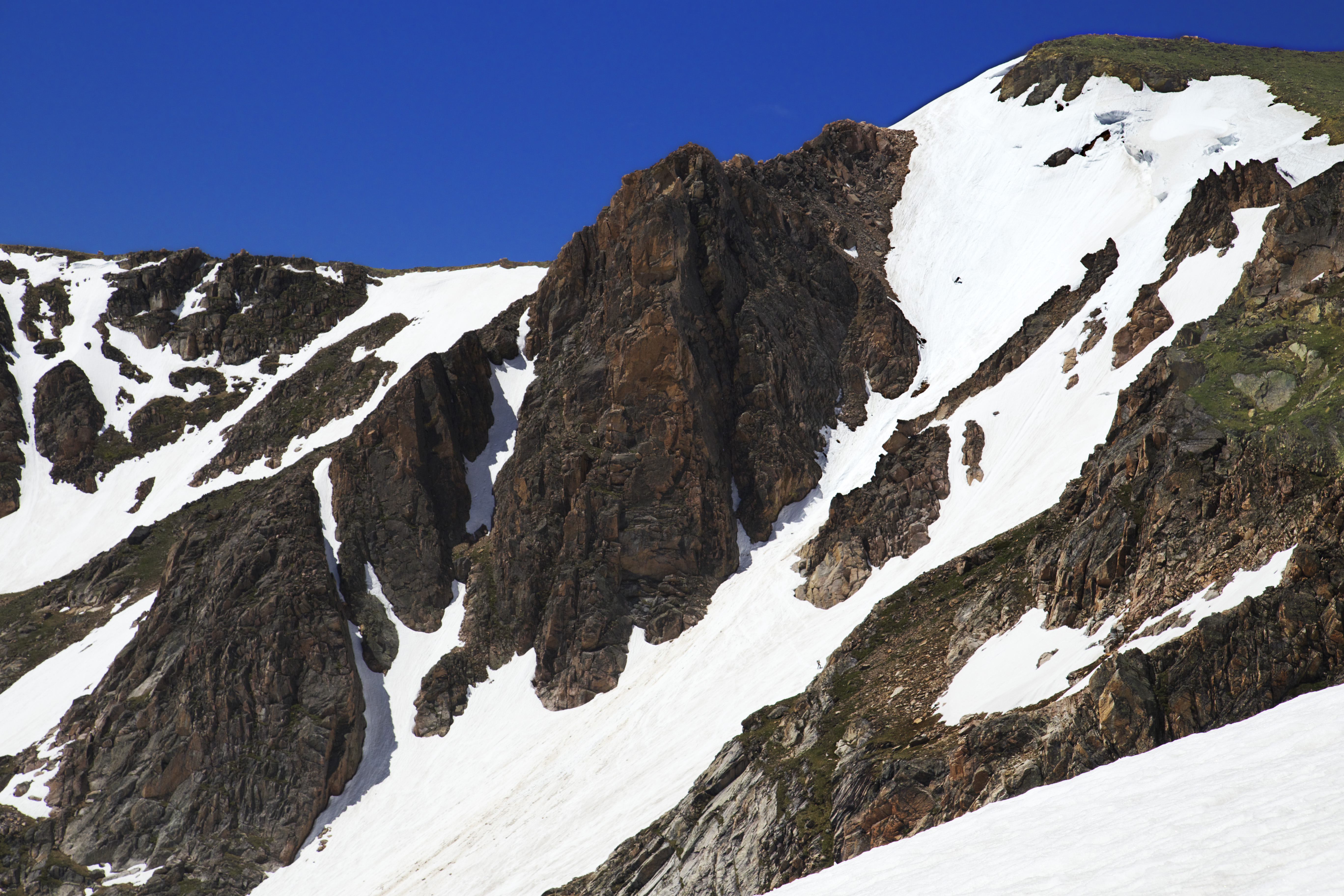 I waited below out of the slide path for Nolan to drop. He ripped two huge turns, aired huge out of a ridge in the snow, and blew by me. I proceeded to drop, double eject, leave huge footprint-sized holes in the snow, and almost chunder from the high volume of Fireball I ingested the previous night. What a hell of a way to start your first run. 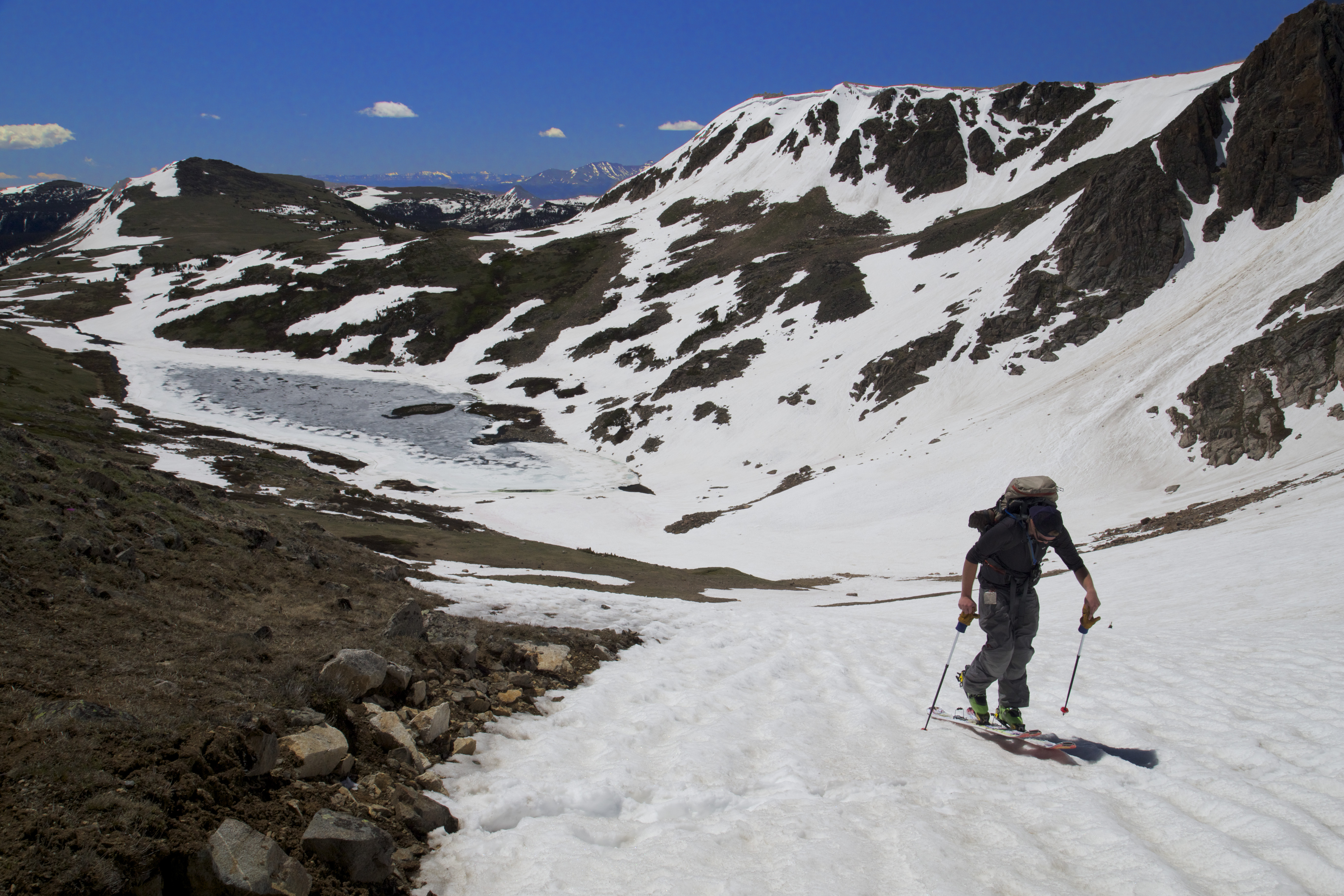 I met up with Nolan and Logan, and we put on our skins for the next run. He smoked me on the way up. We were greeted with an amazing view, and a unrideable cornice below. Instead of skiing this line, we just ripped the bowl closest to the road. As we dropped, we watched a tour bus roll up and observe. Quite an audience. 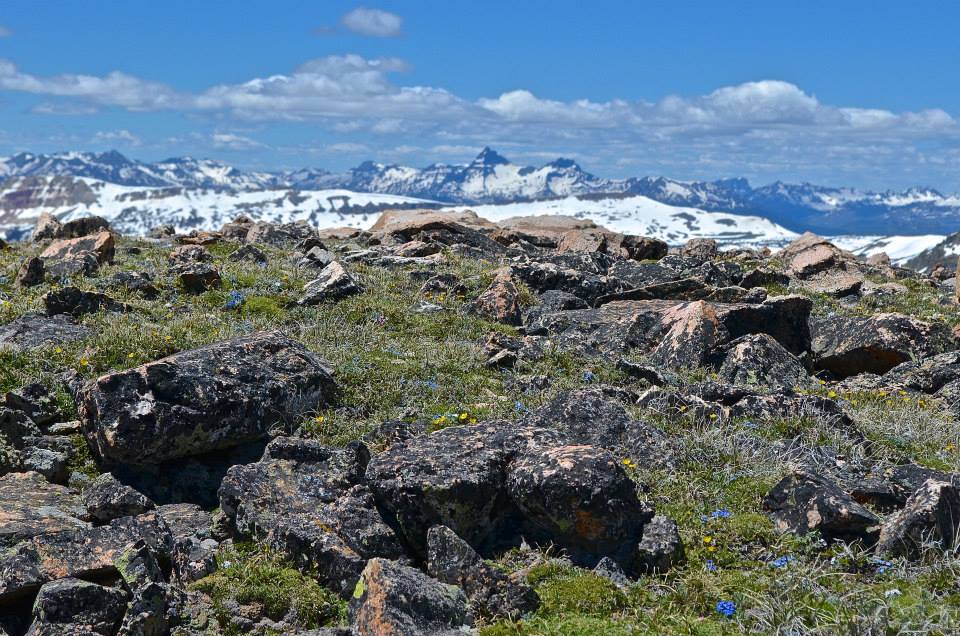 Pilot and Index Peak of East Yellowstone in the background. Photo by Nolan Blunk.

Our last run of the day was by far the sickest. When we first drove up the switchbacks to the pass, we spotted a potential day ending line for the way back down. About 300 yards over from the road, the snow line extended all the way to the top of the plateau. We figured we could find a spot from the top that would be rippable. Driving back across the state line into Montana, we pulled off after the rope tow. We couldn't see our line directly from the road, but it was our best guess that the line was just past the closest ridge.

We reloaded our skis and started hiking from the road across the top of the plateau, jumping over a couple little streams and navigating swamps. We got to the ridge, and again, had underestimated how far the line was from where it appeared to be. We continued along the edge of the plateau hugging the top of the cliffs that border the whole valley. 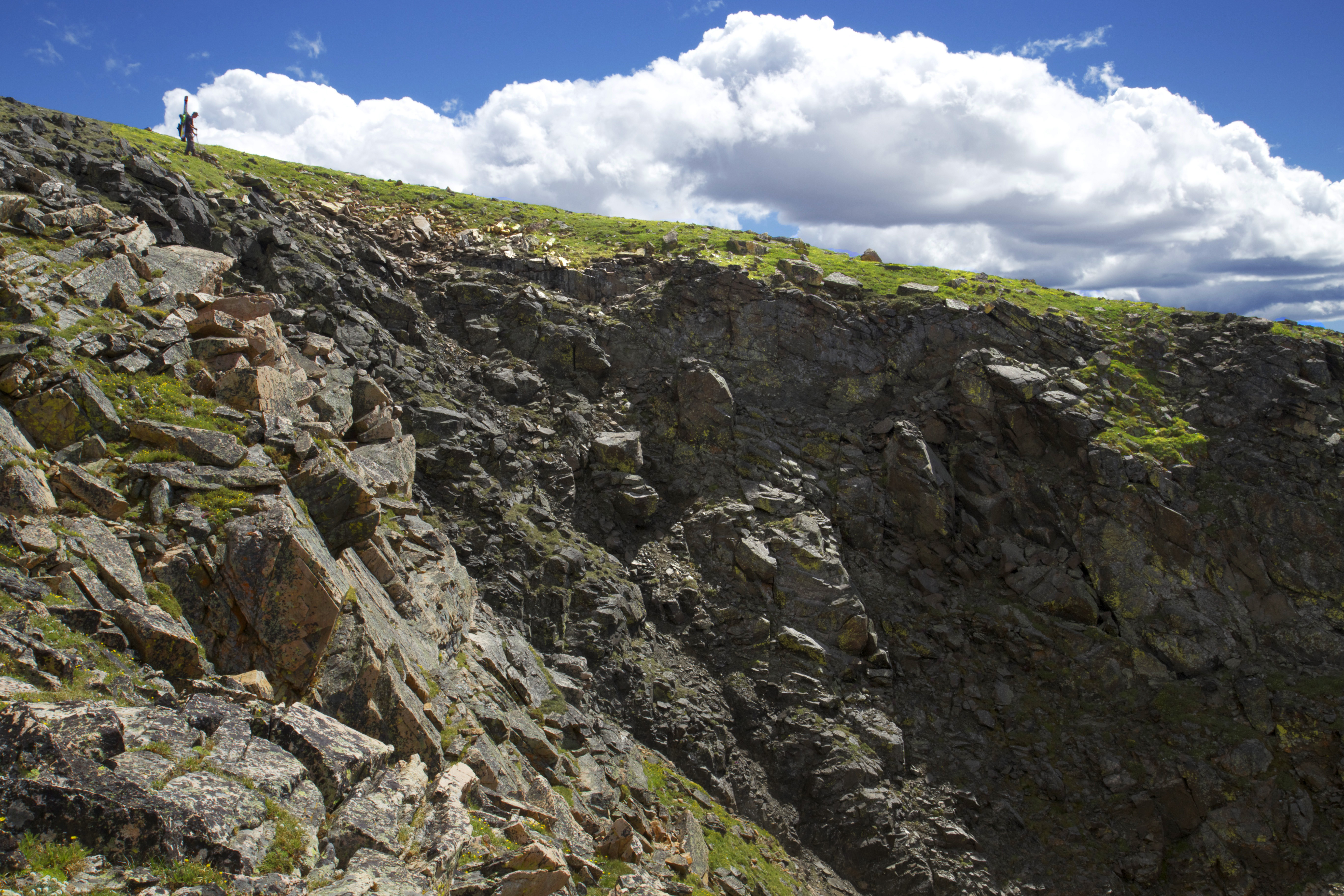 We walked a few miles across the plateau. A flat grassland peppered with rocks was on our left, and then huge rock chasms were to our right. We finally rounded the top of a crest and spotted snow, thankfully. Nolan and I had been reassuring ourselves the whole time that we weren't walking in the wrong direction. We set our packs down and walked out onto the rocks to check our line choices. It looked like we had three possible routes down from the top. We decided to take the sketchier of the two middle chutes hoping it went through to our meet up on the road below. 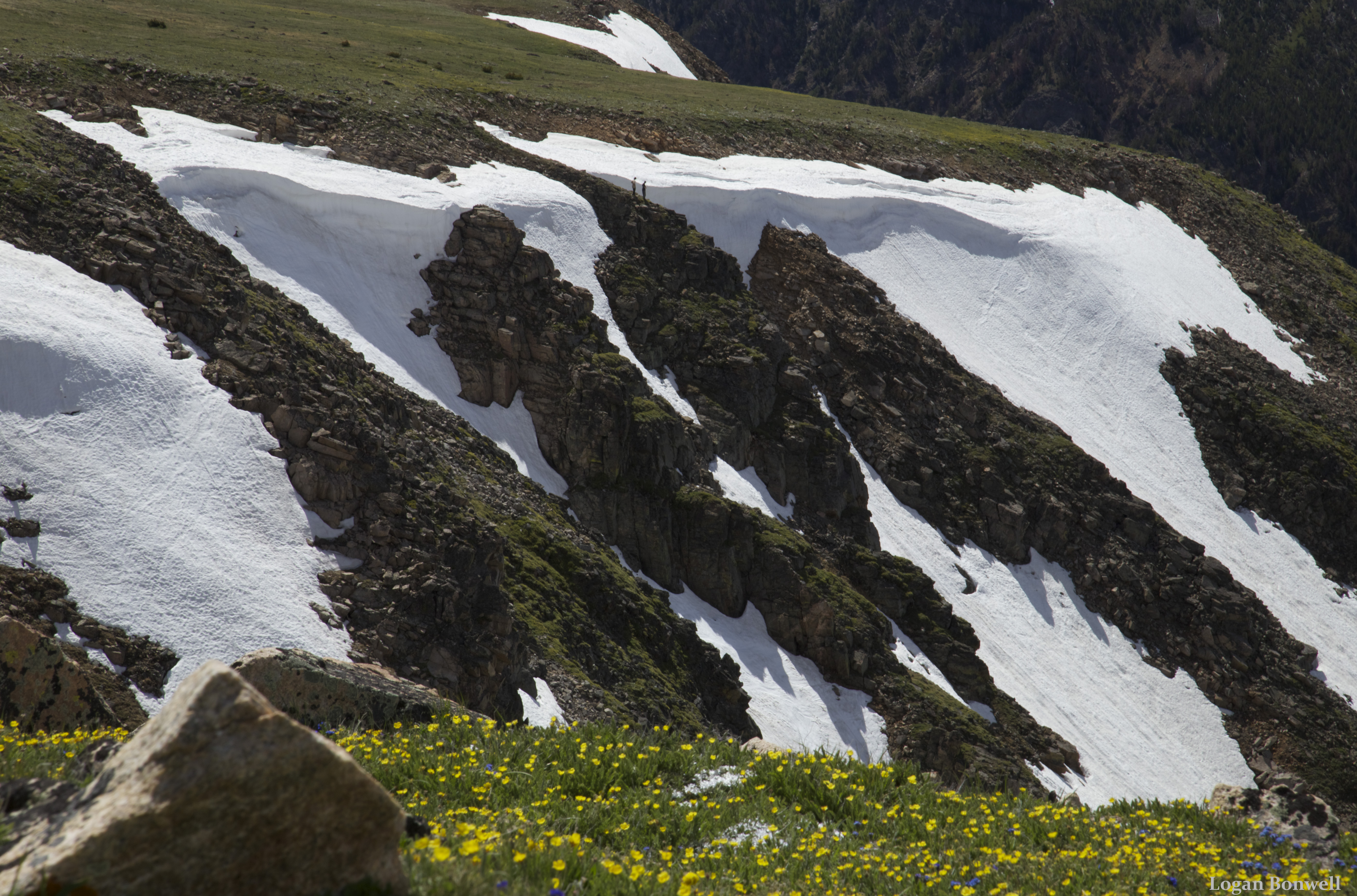 We were really worried about wet slides at this point in the day, and could see visible cracks in the top of the cornice about four feet from the edge. The skier's right side of the drop in rolled nicely into the middle of the chute, but by the time we would reach the steepest part of the slope, the cornice was directly above. If it was going to slide, it was going to slide directly onto us.

Nolan and I strapped in off the snow and cautiously moved onto the top of the cornice. I dropped first, as I have less experience in the backcountry. I was terrified that I was about to pull a huge wall of snow down with me, but as soon as I edged through my first big right turn, the snow held perfectly and it gave me some of the funnest turns I've taken all season. 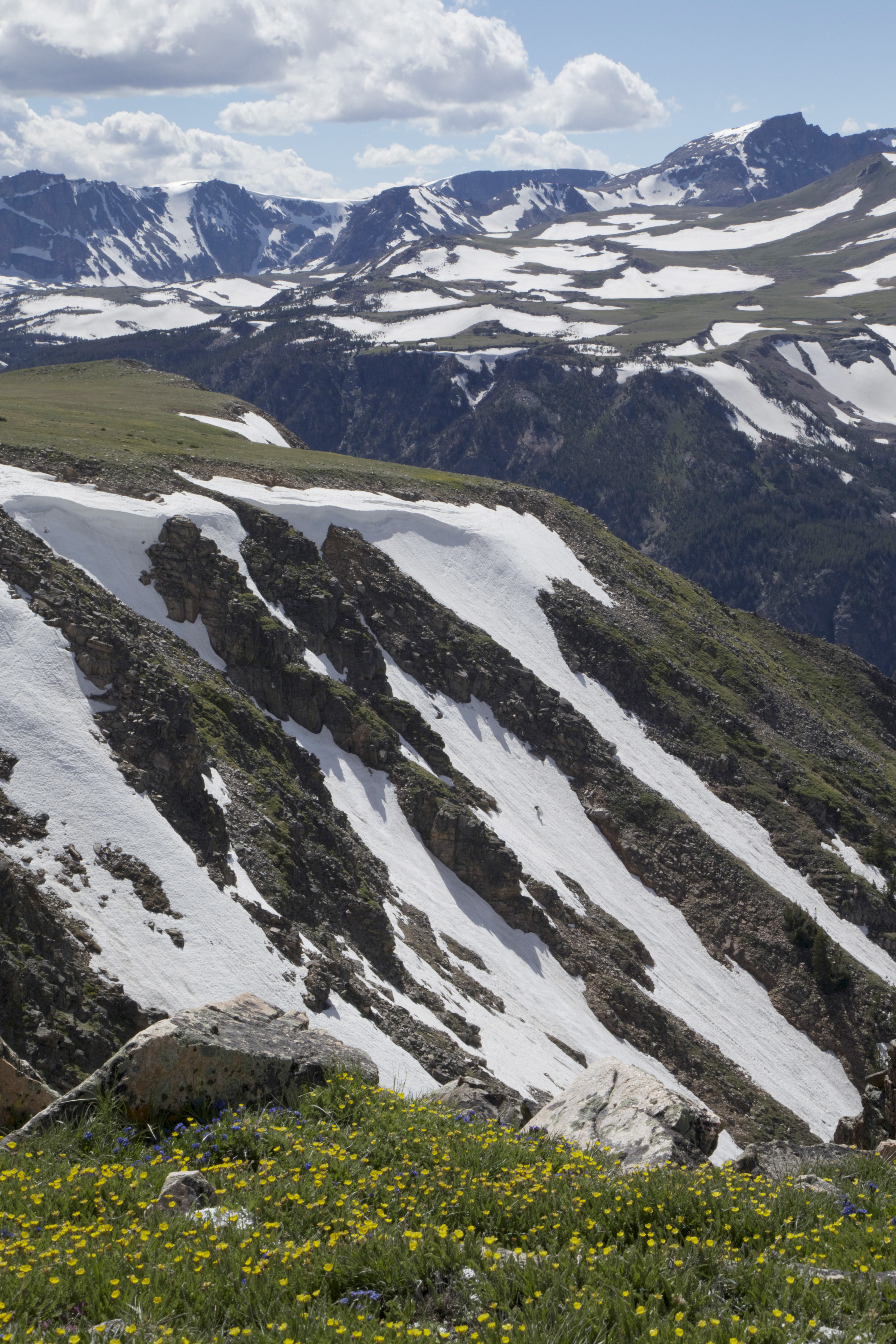 I ripped down through the rocks and waited out across the far side of the widest opening and yelled for Nolan to drop. He shredded turns, and sent rooster tails all over the surrounding rocks. We met up halfway to reflect on how sick the line was, then proceeded to ski the rest of the way down. 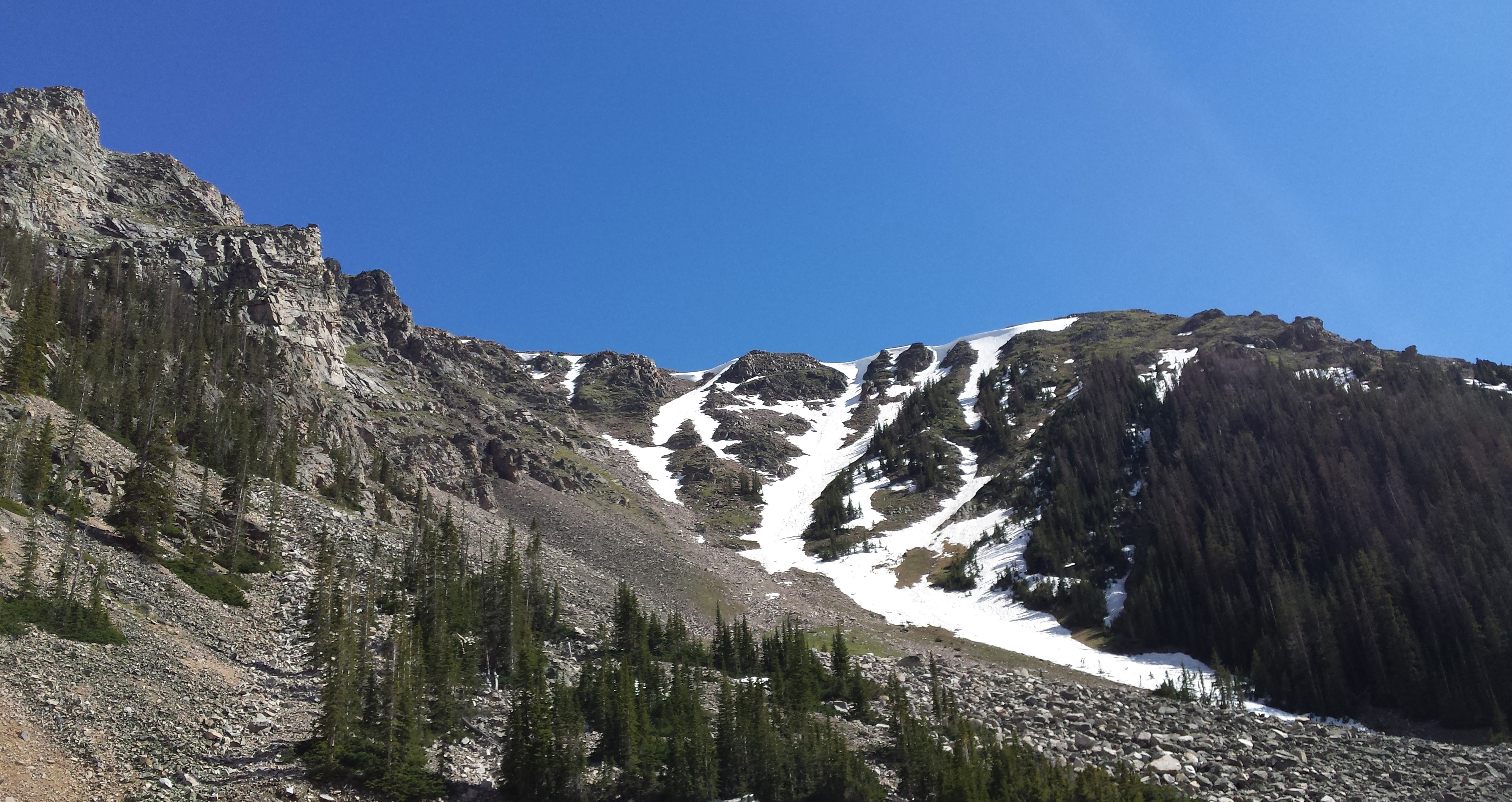 The last line of the day. Photo by Matt.

All in all, it was an absolutely sick day shredding. It's always great to be able to get some turns in in the middle of summer.