The pictures we had seen didn’t lie. Despite the grim November snowpack in the Sierra, it was out there: glorious powder snow deep enough to shred lay hidden in the deepest, darkest crevices of the high country. It was only a matter of finding it.

On Nov. 16, Jeremy Jones, Ryland Bell, Morgan Hebert and I decided we could wait no longer. It was time to start the backcountry season and hit the trail to earn some pow turns. The destination we decided upon was a steep north facing High Sierra couloir outside of Bridgeport, California. We knew climbing the couloir would be a big effort for the possible pay-off, but it seemed reasonable enough to make it worth it. Not to mention all of us were long overdue for a blow-out day in the mountains.

The adventure that ensued became a "Further" training day for more reasons than one. Driving home to Tahoe after the mission, Jones summed it up:

“Ninety percent of the steps we took today could have been hazardous to your health,” cracked Jones. “I don’t know how else to describe it other than the perfect extreme training day. We climbed up miles of sketchy talus, front pointed up ice, hammered home the axes, rode down with our axes out and scored some pow turns.”

There is no denying that the hike-to-ride ratio hit a new low for our crew on the trip, but the fun meter was still pinned throughout the full-value day. Check out the photos and share in our first snow stoke ... and a little bit of suffering. 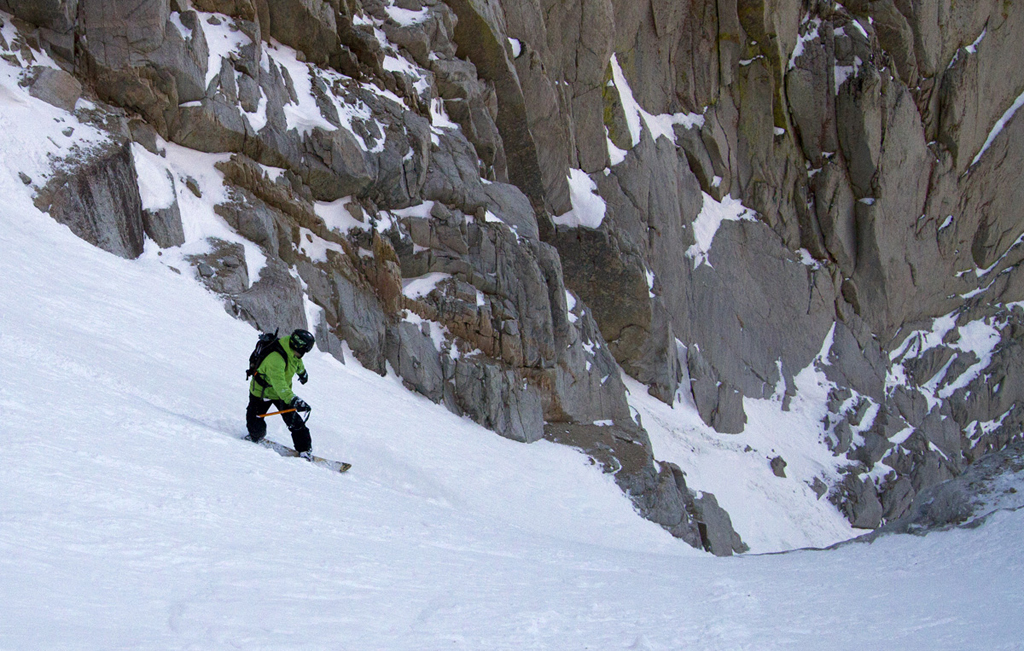 This is what we were dreaming about when we rationalized punching it up to the couloir — pow turns in a steep alpine hallway. Fantasy became reality for Ryland seven hours after leaving the trailhead. 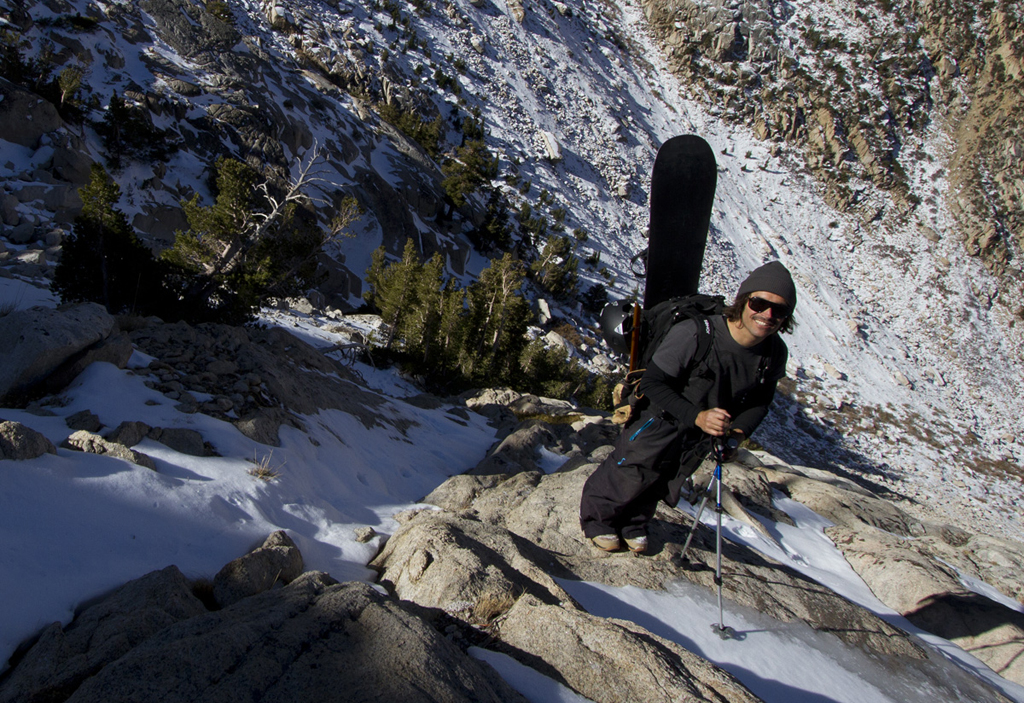 The Movember Mario Brother, Jeremy Jones, had gotten a glimpse of the remanent snow in the couloir on a scenic plane flight three weeks earlier. We were betting that the wall to wall layer of last year’s snow was plastered with a couple feet of stable pow. Only one way to find out. 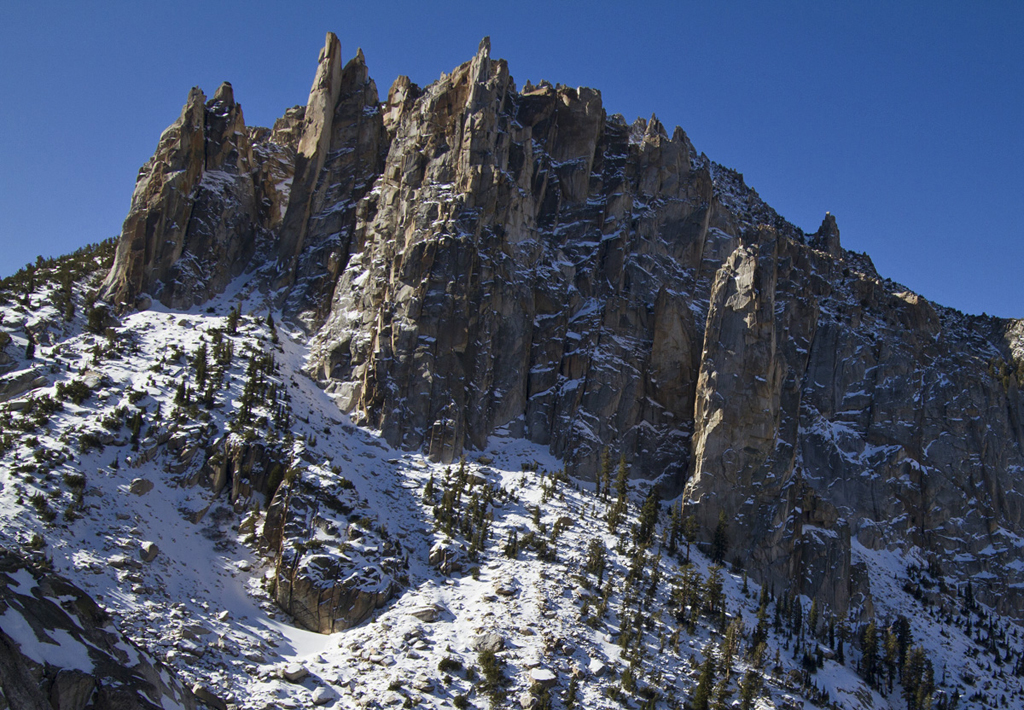 The five mile, 3,400-foot climb to the base of the coolie allowed us plenty of time to look around. I spent more than a few minutes daydreaming that I had my climbing rack in my pack instead of my snowboard. Sure looked like better conditions for sending splitters than shredding. 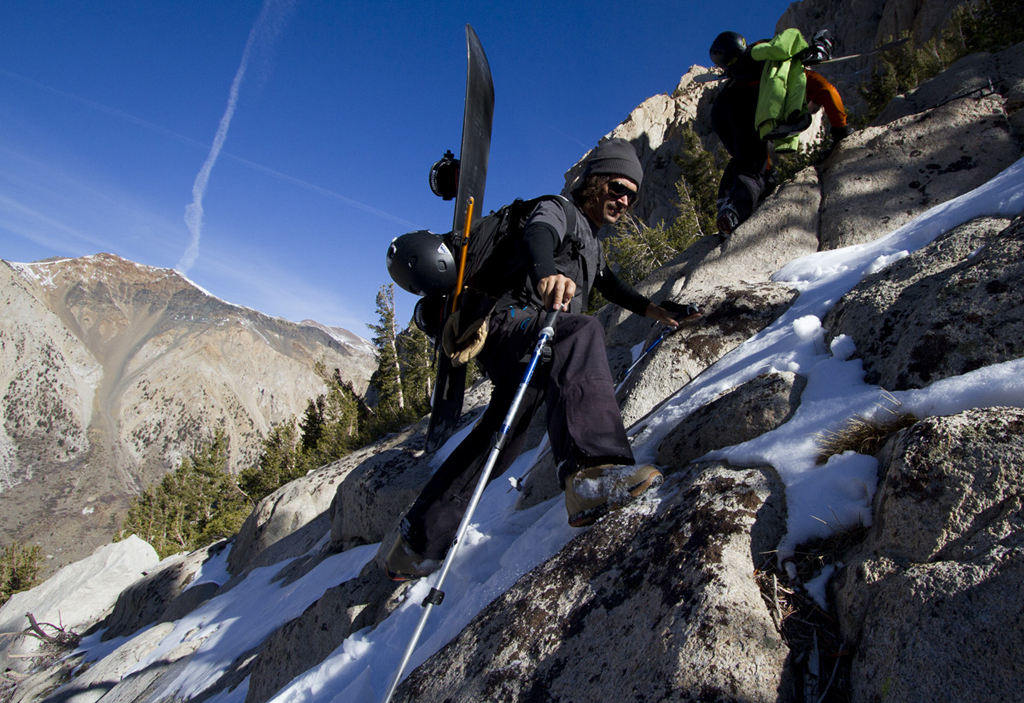 We did find a few spots to bust moves on granite. Climbing the slabs gave us a brief respite from the endless snow-covered talus fields. 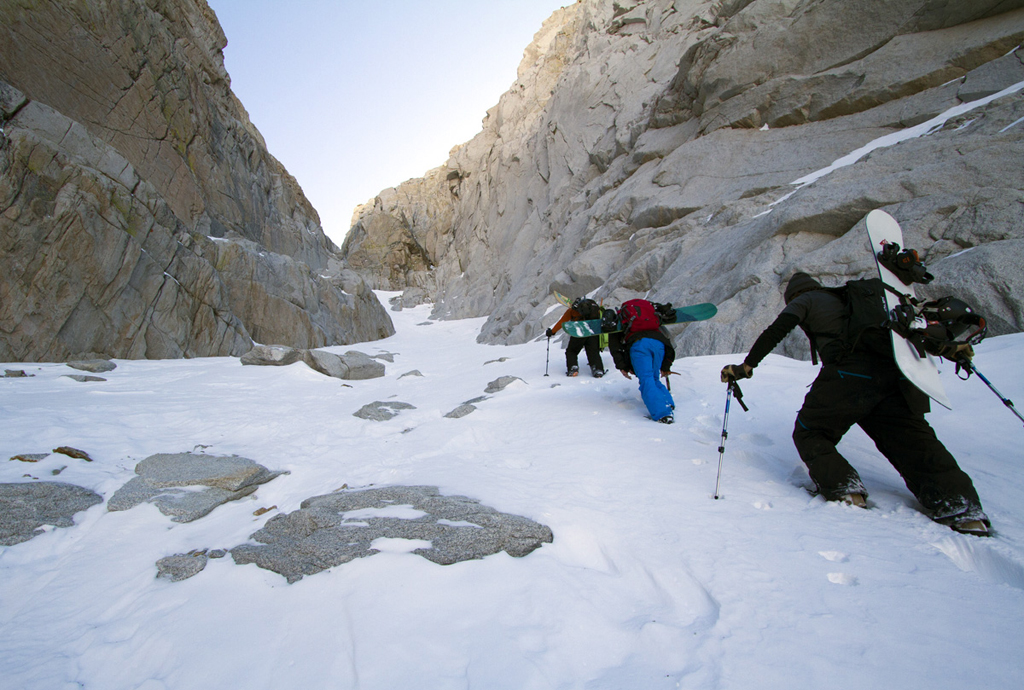 Our boots finally bit into a legit snowpack at the entrance of the coolie. Snow conditions were variable, as expected. We found anywhere between 0 inches and 18 inches of wind-packed powder on top of a firm, icy base. The dense, new snow was bonded pretty well at the base of the chute but we knew that might change the higher we climbed. 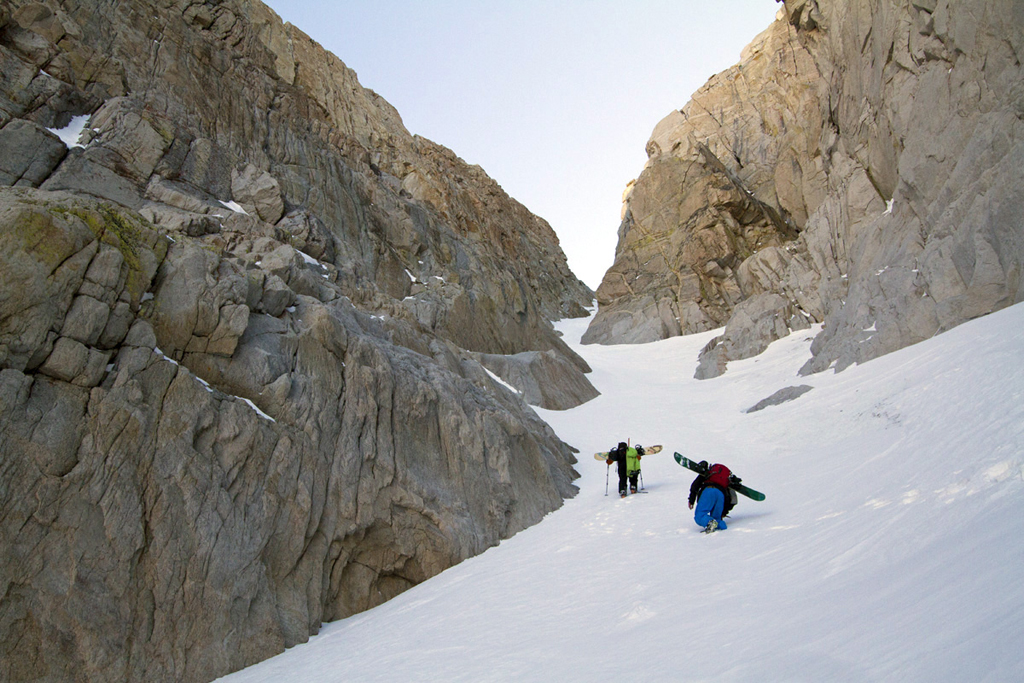 The foreshortened view of the couloir on the approach had me thinking it would be a short climb. In reality, the couloir snaked up way farther than expected with several pitch changes. The low snow levels also made it as steep as it ever gets. How steep was it? Not sure, didn’t measure, but the top half must have been 50 degrees plus. 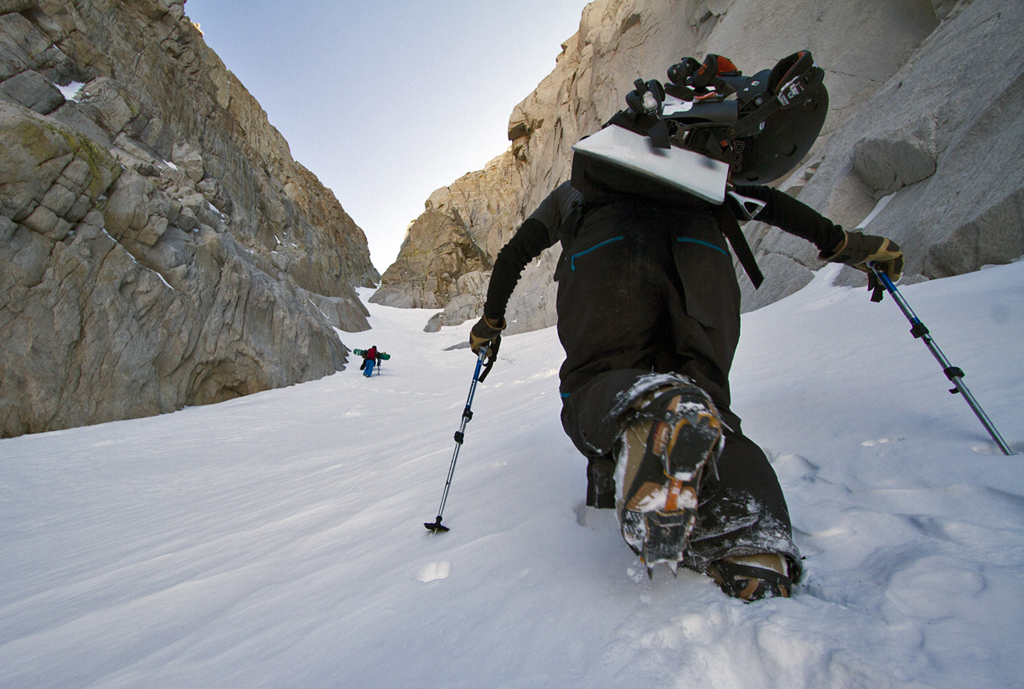 Just up ahead the climbing got more technical as the snow was shallower. An icy bulge 150 feet from the top of the climb marked the end of the new snow. The couloir was scoured clean above the bulge and required front pointing and ice axe placements to keep climbing. Our bodies relished the tenuous moves while our heads processed the adrenaline of such bold steps on the first day of the season. 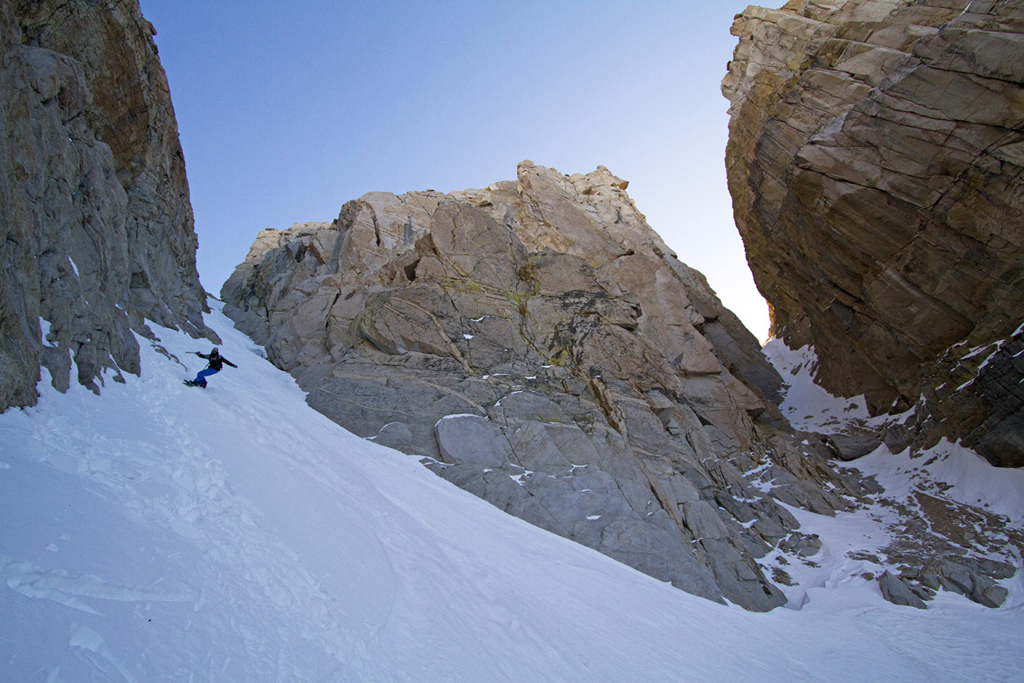 Dropping in off the top was an exercise in survival sliding. Everyone inched down on their toe edge, lowering themselves off of ice axe placements until after the icy bulge. Once back on the fresh snow the conditions got exponentially better, but the steep pitch and firm base made for spicy turns. Morgan Hebert milked the deepest snow on the far skier’s right wall. 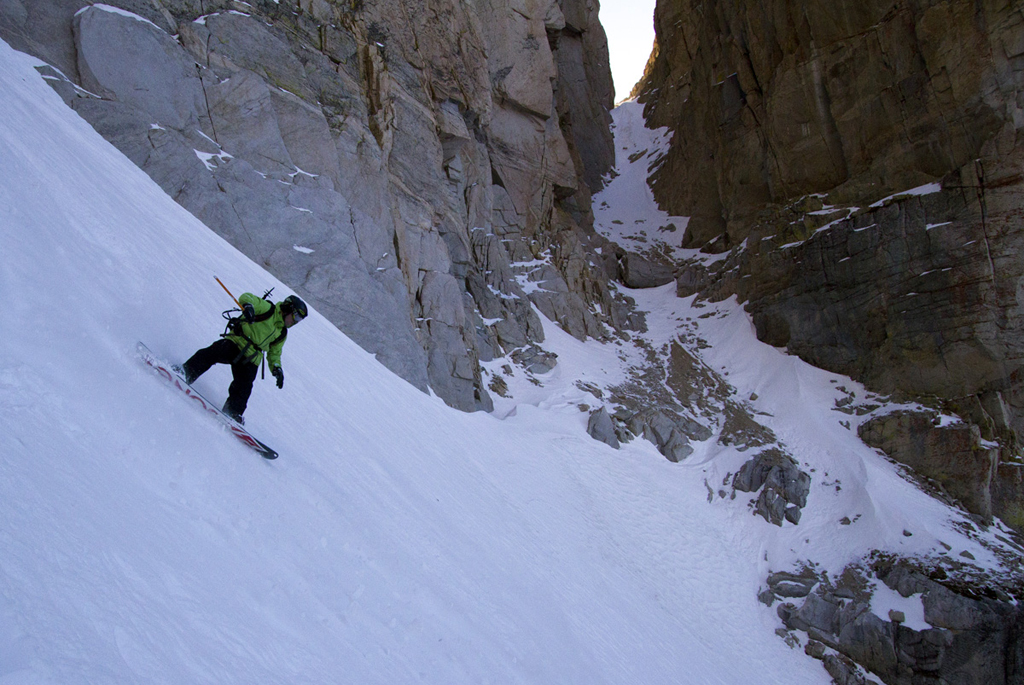 The middle pitch of the coolie held the best snow. If you railed too hard your edges would hit the ice but if you floated into the fall line you could stay above it. Ryland Bell stayed light on his feet and linked up the pow turns. 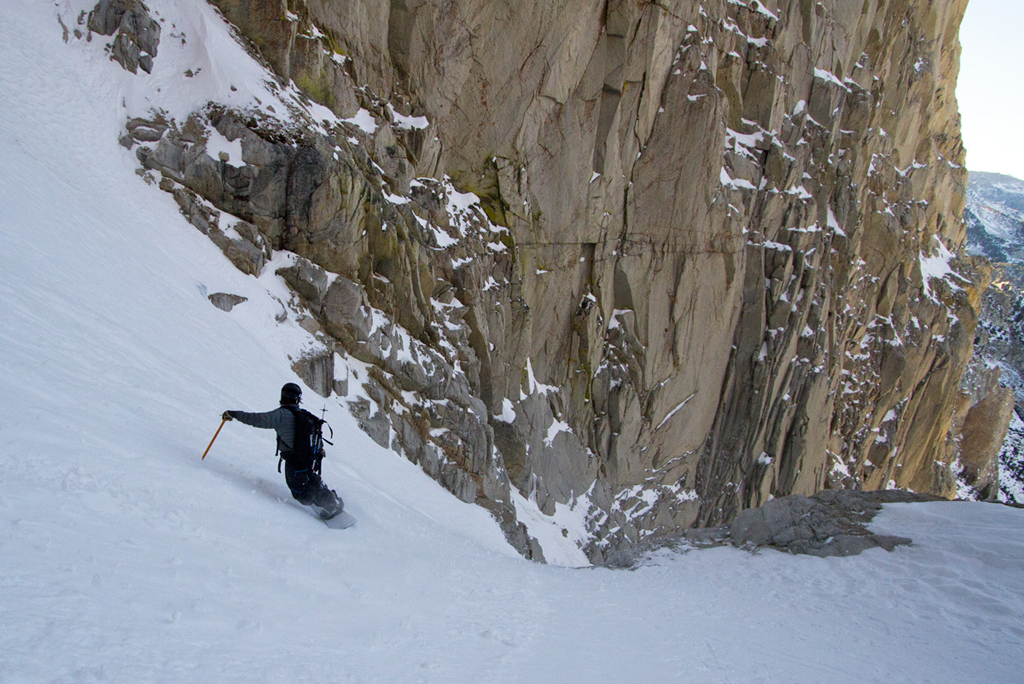 Everybody kept it in first gear including Jeremy, but we all got a taste of what we had come for — steep rideable pow. The Sierra need another few feet of snow before you’ll find much rippable pow out there. 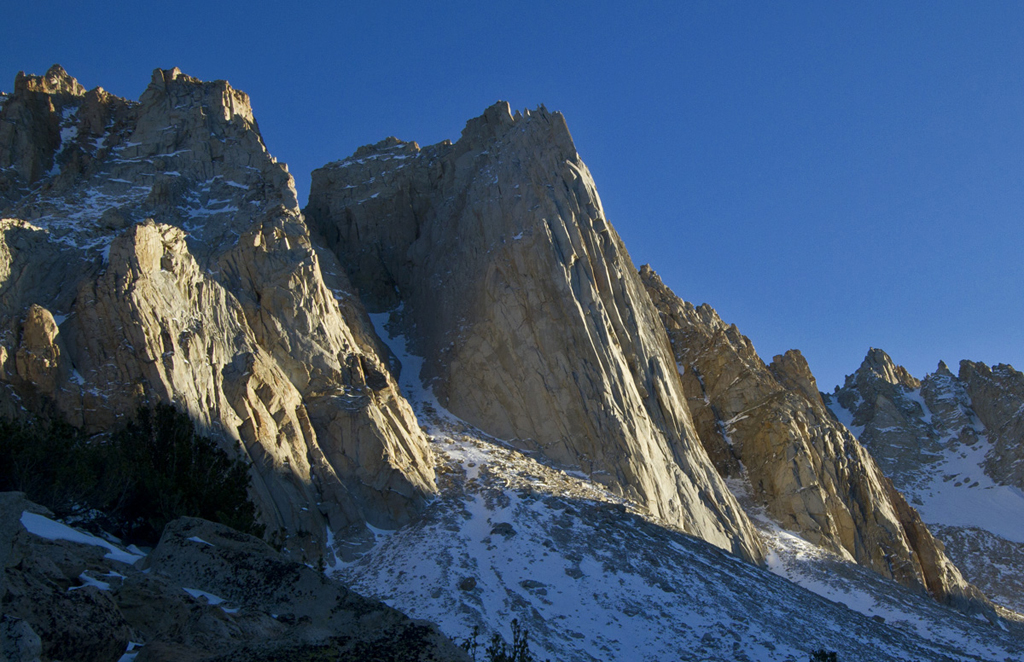 Hanging out in the shadow of the walll had made for a wild outing on this sunny November day. Between the classic climbing routes and the couloirs, no doubt this zone is a year-round alpine playground, even in the shoulder season. 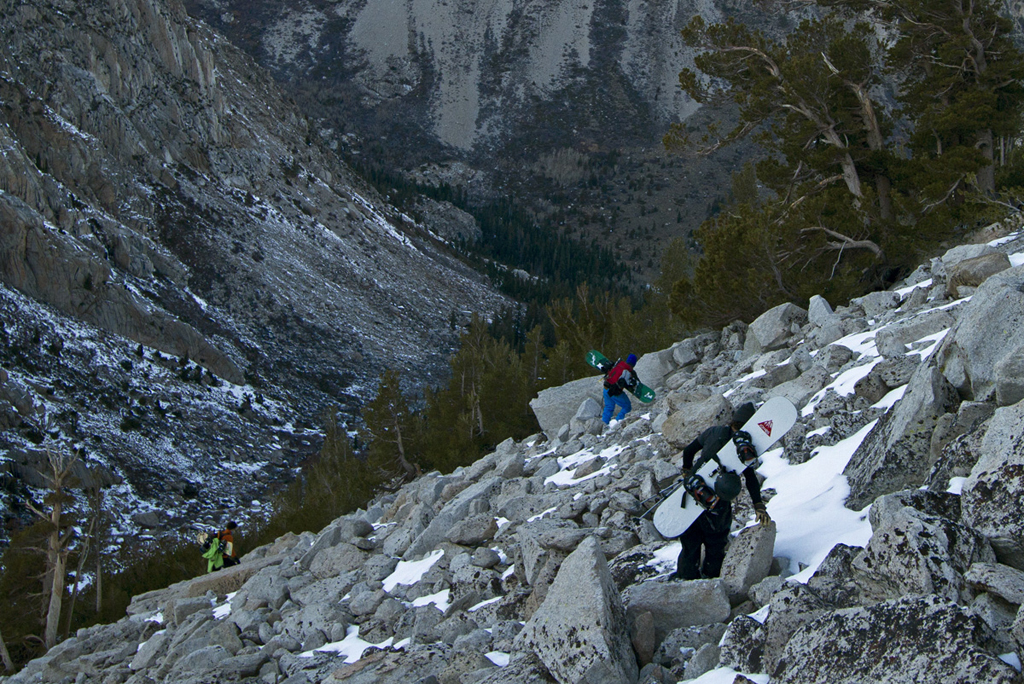 Moving through the icy boulders on the long descent pushed our bodies into overdrive. Thankfully we made it down the talus fields before night fall. Our headlamps clicked on as we hit the climbers trail and picked up the pace racing out of the basin. Twelve hours after leaving the trailhead we cracked beers back at the car celebrating a safe and successful mission. We had found some pow turns and thoroughly wasted ourselves. "Further" adventures in the Sierra will only get more rewarding from here on out.