From Sierra Leone to the Tetons: Alpha Barrie Continues to Progress 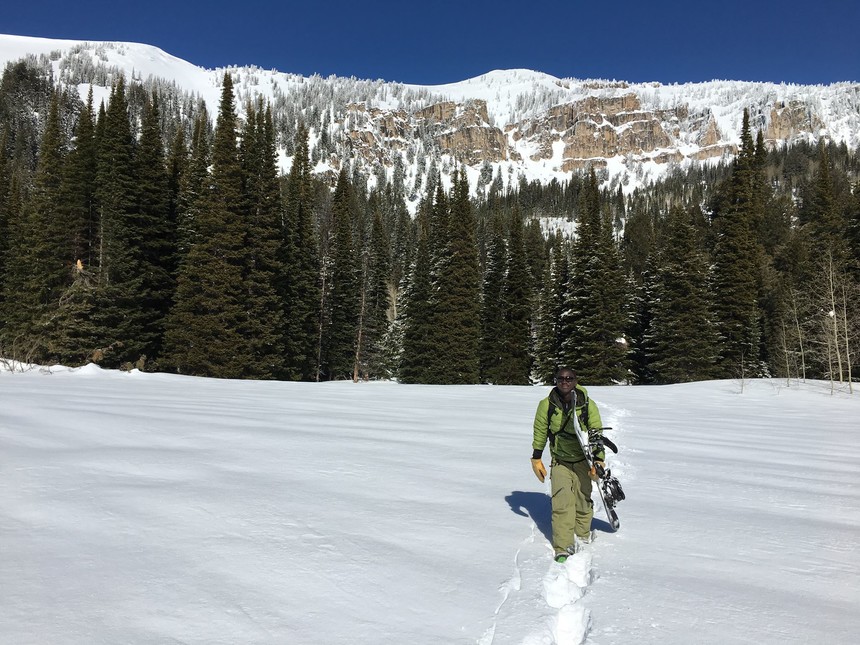 Out here in TGR's home in the Tetons, we meet plenty of interesting characters. Not many people just stumble into the area: To set up shop and thrive in the area, it requires a certain amount of dedication and personal agency. And those personality traits also tend to illicit a certain colorful quality in the locals–most everyone you meet out here has a story to tell.

But, of all the people we've met in our little mountain community, few have captured our attention in quite the way that Alpha Barrie has. Ever since we ran our story on Barrie's first jaunt over to the United States last year, and his journey to becoming the first Sierra Leonian snowboarder ever, we've been wanting to catch back up with him to see how his riding has progressed.

So we did just that, and got on the phone with him. Here's what he had to say.

TGR: So Alpha, what have you been up to since the last time we talked?

Alpha Barrie: I've really just been snowboarding, hanging out with friends, learning to snowmobile, going up on Grand Targhee: Just having fun in the snow.

And how long are you staying in the States for this trip?

AB: I have a triple entry visa that gives me six months in the country. I'll leave in July of this year and then I have one more year I can come visit.

What's been the biggest difference between last year and this year riding?

AB: This year is really different from last year. Last year was my first time seeing snowfall, and it was a pretty hard time. When I flew into Salt Lake City, it was -7 degrees. I had never seen temperatures below 60 degrees.

So at first I was like, "Holy shit, this is definitely not my dream." And last year was pretty tough with how much snow we got out here. It made learning to snowboard and adjusting to the area a little more difficult.

Coming into this year though, snowboarding is much easier for me. I've gotten better to where I can go out and ride and play; I've just started landing some 360s and learning on some jumps.

It's really fun, unlike last year where I could not even go a long time without falling on my board. Now I get to practice some badass tricks.

Have you been snowboarding more than last year?

AB: Not really. I came here pretty late in the season this year–I arrived in Idaho in January. Last year I snowboarded for like 77 days, this year I'm much less than that cause the snow was just not that good when I first got here. 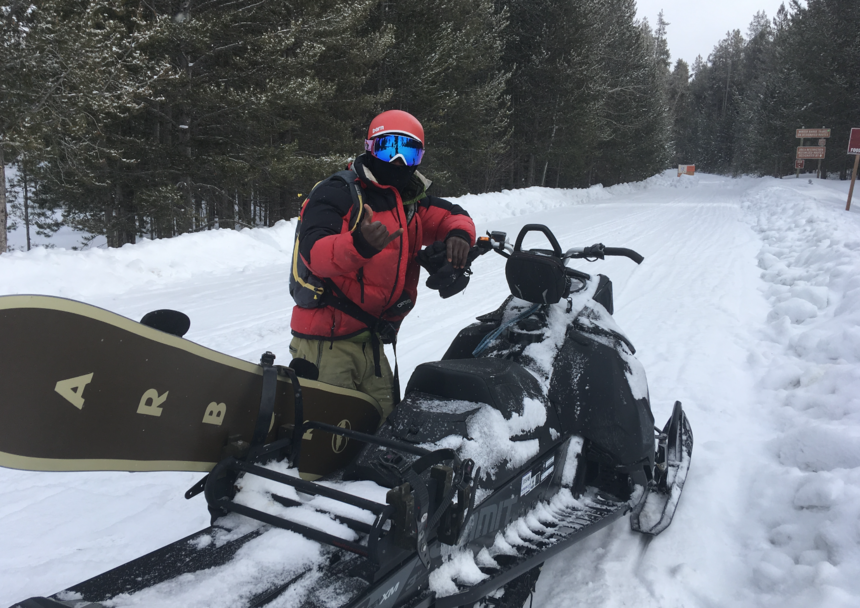 Alpha Barrie has been getting more and more comfortable on snow ponies in his second year in the Tetons. Adam Towle photo.

But it is my second year on snowmobiles–I've been riding snowmobiles more this year, and it's an awesome sport. I'm hanging out with guys like Adam (Towle, his U.S. sponsor) and learning how to be aggressive on the sled. A few weeks ago when it was dumping like two or three feet, it was the deepest I've ever snowmobiled in my life. It was insane, learning how to counter-turn in that much snow.

What do people back home in Sierra Leone think when they see photos of you out in the mountains?

AB: When they see the photos Adam posts on Facebook, they don't know how to react. They're like, "What? Alpha is playing on the ice?" They don't really believe that people go out in the cold and have fun.

So I have to explain to them, "This is a fun place. Snowboarding on the land is fun." They are always asking me, "What is snow?" and I have to tell them it's frozen water just dumping from the sky, and they can't even believe that. They think it's all noise. Only when I bring back pictures and videos do they get it. My colleagues back at the Bureh Beach Surf Club, though, they understand right away.

Does anyone tell you they want to come snowboarding with you?

AB: Everyone at the surf club, they're pretty stoked; they also want to try to come out here and snowboard. I tell them all, some day we'll all come out here.

What do you miss the most about Sierra Leone? Is it the surf?

Despite that, do you feel like the Tetons are becoming a second home?

When I first came here, I was totally scared. I was like, "Oh no, I'm going to be the only black guy in this valley." I thought people were going to be mean. 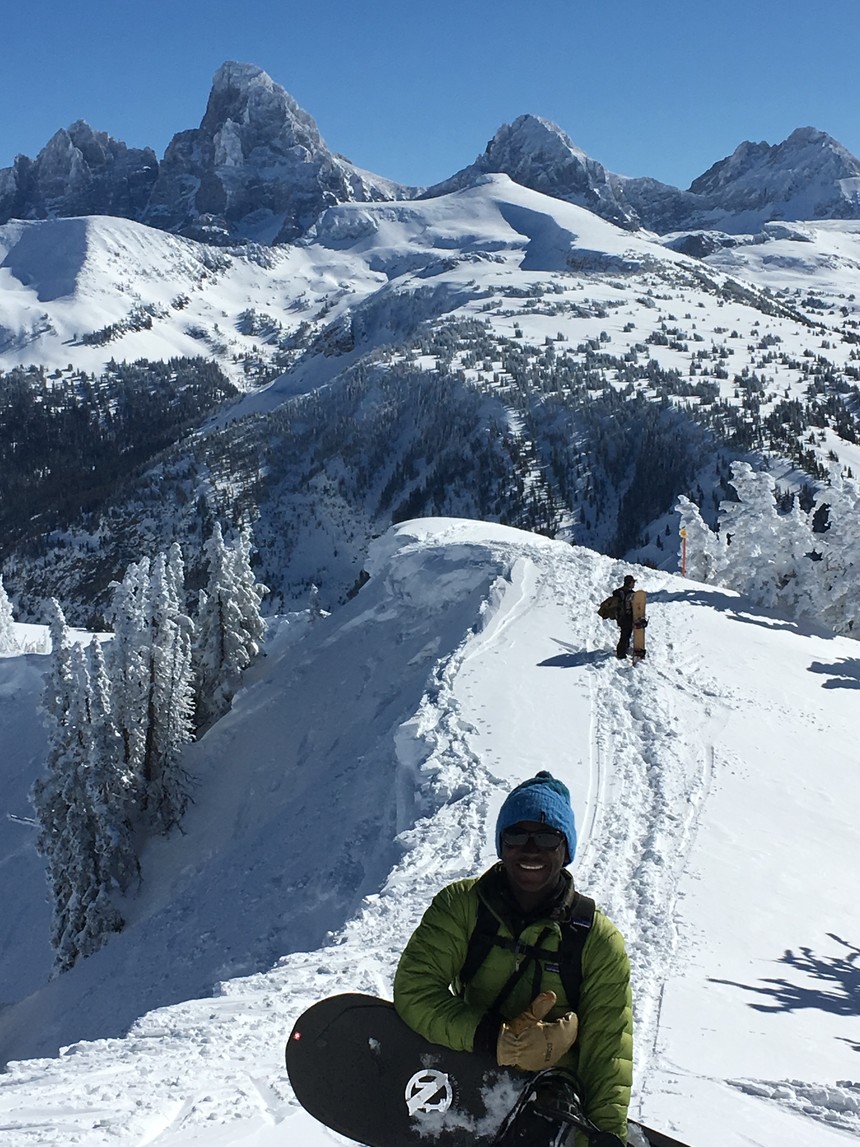 But I never experienced that. People here are super nice. They try to encourage me like a brother. Adam treats me wonderfully. I love the people here in the valley; it's always nice hanging with them and talking about snowboarding.

It’s good for me to come here, it’s like my second home, everyone is so friendly here, it's the same feeling I have in Sierra Leone.

Well, except the food.

You say it reminds you of Sierra Leone. Do you think Americans have overly negative preconceived notions of your home country? Do you wish you could show the people out here Sierra Leone?

AB: Oh yeah absolutely, I want every one of my friends to come to Sierra Leone. I always tell them to visit.

My hometown is a small beach community of 600 people. It's not big, I tell them you won't be in some big city. I want everyone to come to Sierra Leone; I really want people to see it, see how cool it is, and realize it's just a nice quiet place where you can learn to surf some good beginner waves.

I wish people could see our culture. It's not like civil war and Ebola and things like that. It's pretty and peaceful and unique. There's no fighting and everyone who visits, comes back as a tourist. We always make sure guests who come are safe and go back safe. 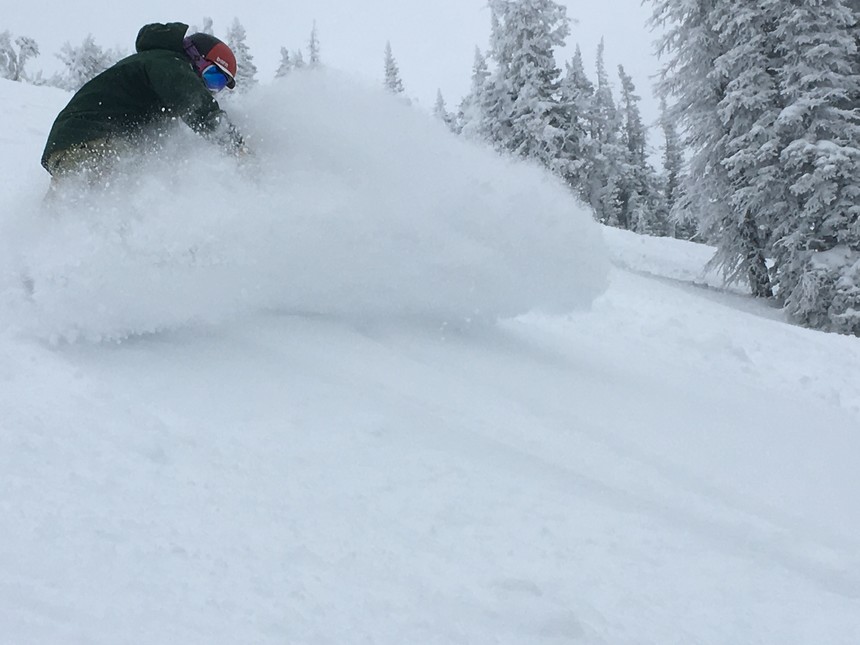 Barrie says all he wants to do is learn how to carve beautiful turns. Alpha Barrie photo.

It’s nice that people can come out here and share that love of the water, between surfing and snowboarding.

Do you think, given how the world is now, if people traveled more, they could see similar we all are?

AB: Of course; it's all the same. That's what I explain to people, it's all one in the same–it's the same sport, surfing in the ocean and surfing in the mountains. These sports bring people all around the world together.

What is your dream for snowboarding?

AB: My dream is that, with more coaching, I can learn how to make a really good turn. A really good, long turn. Beyond that, I want to continue trying hard and maybe one day represent Sierra Leone in the Olympics.

That way, I can teach others in my country how to snowboard. And if I make the Olympics, maybe other Sierra Leonians can realize what snow is, what snowboarding is, who I am and why I keep coming all the way out here.