Earning My Spring Turns: An Afternoon at Eaglecrest Ski Area

Juneau, Alaska—Standing at the top of “the Face”, as the single-black-diamond run bisecting the upper-mountain of Eaglecrest Ski Area is known, I took a deep breath and surveyed the scene in front of me as large, slushy flakes of snow fell all around. Misty clouds covered the tops of the surrounding peaks, and one could imagine that on a clearer day, a glimpse of the Gastineau Channel and perhaps even Juneau proper was possible. While summer is fast approaching, the last vestiges of winter were clearly visible at Juneau’s only ski resort, which had closed a month earlier. 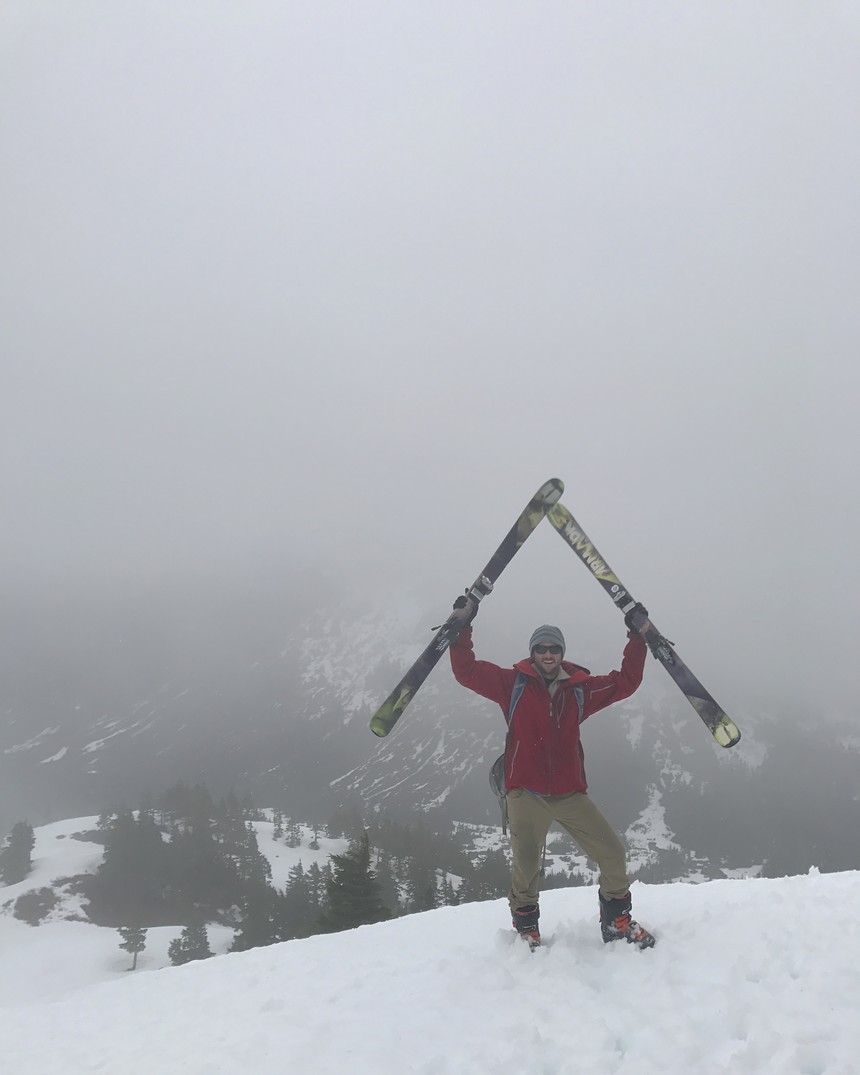 After lugging two pairs of skis from Colorado—all the way through Canada—I felt determined to put them to use, at least once, during my time in Alaska. With diesel-powered chairlifts out of the question, my partner Jaime and I were forced to resort to bootpacking, which is exactly what it sounds like: strapping your skis to your back, and climbing the mountain in boots. A stylish alternative to skinning, it can be at once a pain-staking and exhilarating workout—the best part being is that the way down is a lot quicker than the way up.

This particular Sunday found the precipitation to be heavy enough to impede our vision, an unfortunate happenstance for myself, who failed to pack a pair of goggles. As anyone who has ever engaged in winter sports knows, a pair of sunglasses is a poor substitute for a good pair of goggles, though at least the altitude wasn’t much of an issue. Having just come from Colorado and regularly working at the peak of a 10,000-foot mountain, we were only hiking to a 2,600 foot peak. This might seem like a lot, and it is, but it’s manageable when it’s basically at sea level…there is plenty of air to breath, especially when you’re used to the thin levels of oxygen that blanket Colorado.

Trudging up a wet gravel path in ski boots is not a fun way to start a climb, but we didn’t have much choice. Virtually all of the mountains around Juneau are still capped with snow this time of year, but the bases are bare. Eaglecrest’s was completely free of any accumulation, forcing us to hike a bit before getting to the wet, slushy good stuff. The bottom half of the mountain was easy enough—the melting snow made it easy enough to dig my toes in, and haul myself up the face, step by step. 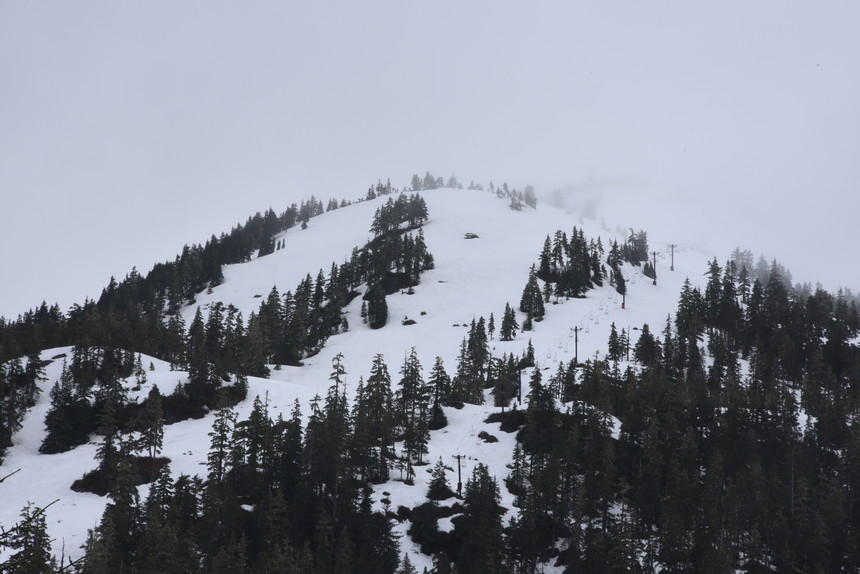 But somewhere around mid-mountain, the accumulation became deeper, and wetter. Imagine two feet of slush piled up high, and then picture yourself trying to walk through it at a fairly steep angle. The only way to keep yourself from continually falling through the snow, oftentimes up to your thighs, is to dig your foot in to pack the snow down before putting your weight into the next step—often up to four times to get any sort of traction; a royal pain in the ass to say the least.

It took at least two hours to reach the top of the lifts—not the true peak, but it wasn’t much worth the extra hike, considering it was completely blanketed in clouds. All the way up I found myself pausing to take in the scene around me—western hemlock, spruce trees, and quickly moving patches of fog covered the landscape, one of the only places I’ve been in Juneau where the water wasn’t visible. The view from the top is the same, and you can see the rainforest around you come alive.

Climbing up in a wet rain is less than fun, but it’s doable. Skiing down in it is a bit more of a challenge, but after spending the past few hours lugging our gear up the front of this mountain, I wasn’t going to let that get to me. After taking the obligatory selfie and high-fiving, strapped into our gear, Jaime and I took off down the mountain, following the same route we had hiked up. We skied every small patch of snow we could find, making it to the base in just a few short minutes. It’s amazing how you can put so much effort into climbing something, only to ski down it in just a few short minutes. We unstrapped our gear, and silently carried it back to the car—grinning like little children. After bringing our skis all the way from Colorado and hiking to the peak, you could certainly say we had earned our turns.