Named one of the "Top 50 Classic Ski Decent in North America", the Devils Bedstead has been on my list of peaks to climb and ski ever since I saw a picture of its jagged profile and impossibly steep north face. I had offhandedly attempted an ascent in May 2012 with my buddy Ralph Forgeon but we had trouble finding the correct route and were hit by a burly snow storm; forcing us to bail before we even reached the base of the face. Every year since, I have told myself that I will "do it this spring," but things always came up with work or injuries. 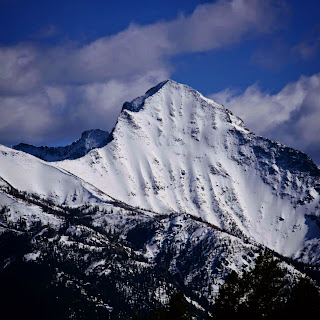 When my friend Bob Molyenaux gave me a call last week asking if I would be interested in climbing this iconic peak I was taken by surprise because it was the exact thing that was on my mind, I just hadn't known who to persuade into the journey. Without hesitation I was fully onboard.

Due to work on the tree farm, I had a very narrow window in which I could make the trip happen. The weather forecast was showing that Saturday-Monday would be ideal but that the days around them were storming. The storms always seem to last longer and start sooner here so I figured that that meant only Sunday would be good weather. It was on. Bob and I both called our resources for beta on the ascent. I talked to Griffin Post, who has done the climb twice, and he gave us great info on how to navigate through the forest and find the base. Bob had done some great research and we both felt prepared with the maps and pictures that he had obtained.

We decided to do an early morning start rather than camp out the night before. My alarm buzzed at 5AM and I was at Bob's place by 6. The sunrise while driving over Trail Creek was incredible with its pink glow on the Bedstead. Man it looked huge, and we were still miles away; what were we thinking? 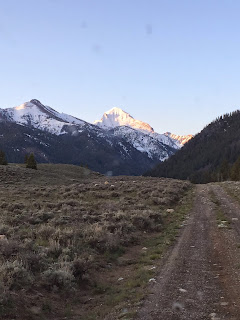 We were loaded up with our much too heavy packs and walking down the Kane Creek Trail at 7:11, that was a good sign. After the third creek crossing we walked a bit further and then veered off into the trees where it looked the most navigable. At this point it was hard to tell if we were on the right course but we started following a game trail at some point; and the deer always know what they're doing. 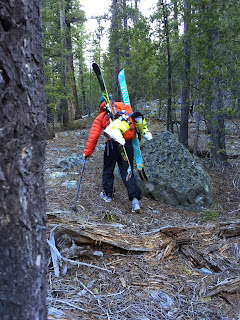 We hiked for about 30-45 minutes minutes before hitting the snow line in the trees and attempting to walk on top of it, without much success. We then skinned through the trees for another 30 minutes or so. 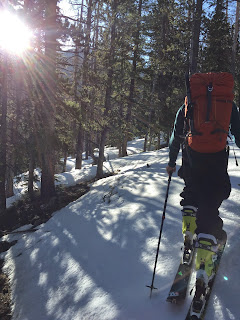 Once we had arrived at the base, we could see that the storm from the past few days caused some wet slides but the climb itself actually didn't look nearly as intimidating as it did from afar. We slid over to the couloir that had the most obvious route up it, slipped on the crampons, grabbed our axes, loaded up our skis once again, and had a quick snack. 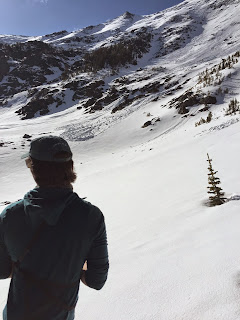 We climbed to what we could tell was the halfway point of the face and only 2.5 hours had gone by from the time we left the car. This got us pretty hyped on how well we were doing. That would soon change. 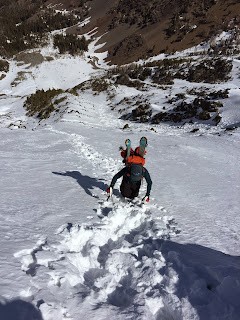 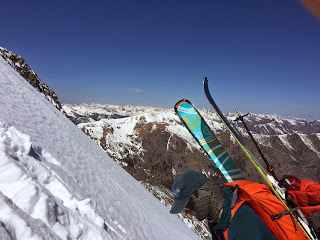 The higher we climbed, the steeper and more wind affected the slope became. We felt lucky to have a fresh 6" layer of snow to give us more purchase into the face, otherwise I would have been scared out of my mind. One little slip of a foot and you would go for the scariest ride of your life. But, we still had to deal with how steep the mountain was getting, we were definitely not setting any records anymore.

We got to a little flat perch about 500 vert ft. from the top and saw some people who had stopped there, they said it wasn't worth for them to get up that last little bit. I was confused why they wouldn't just do it, but we soon found out their reasoning. The cover was minimal over the rocks, the sluff was getting worse, and our purchase into the snow was not ideal. Each step was only a few inches in front of the last, we were using our axes in one hand while clawing/punching with the other hand; progress was slow and painful. Every time I stopped I had to keep my legs calm by placing my knee against the slope; otherwise I would start to have the most wild thigh cramps and shakes. I began to worry about making it back down the face, but we pressed on. It took us about an hour to get up that 500 vert ft. section. But hey, we did it. The top of the Bedstead is just as narrow as it looks, it's practically a tightrope walk with a couple thousand feet down on either side. Just enough room to lay your pack down and eat some lunch. 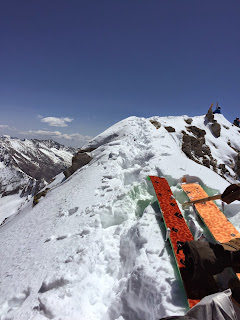 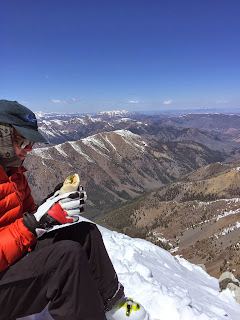 You can barely see Baldy in the distance (center of frame)... 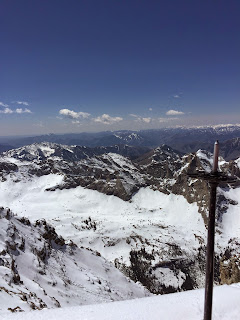 Feeling accomplished, we began the ski down. At this point it was warming up significantly, any later and it might have been too warm. There were sections of wet, then ice, then wet again. The snow was strange but that didn't matter. At the bottom, we traversed to a recent slide path that allowed us to ski down a little closer to the Kane Creek Trail. We popped off the skis and boots and then down-hiked to the trail, it took about an hour from there to the car. 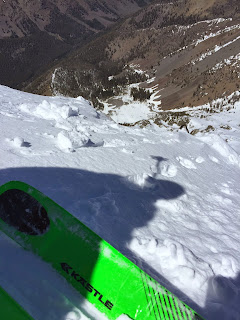 The day could not have been any more perfect, the sun was out, the wind was calm, the air was warm. It came with its challenges, but this was definitely one of the most memorable skis I have ever done. Stoked to have shared this with the Bobcat.