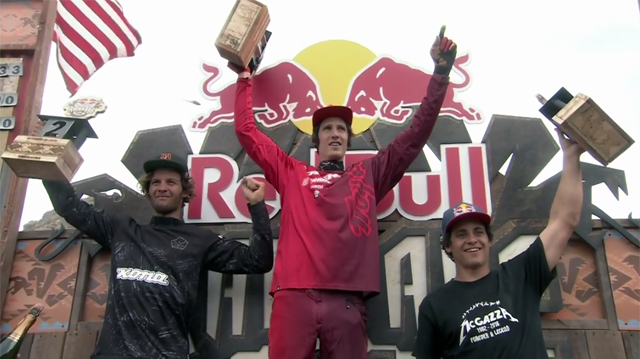 Let me say first; I thought the judging was spot on. Props to RedBull for taking all the drama and nagging out of scoring. Or at lest keeping it within acceptable variation for the insane nature of this event. Also, the natural lines at the 2016 event location felt way cool compared to all the built features of the past. That and a great mix of old school and young-gun talent tee'd up this year's Rampage as one of the most energized, positive events ever. 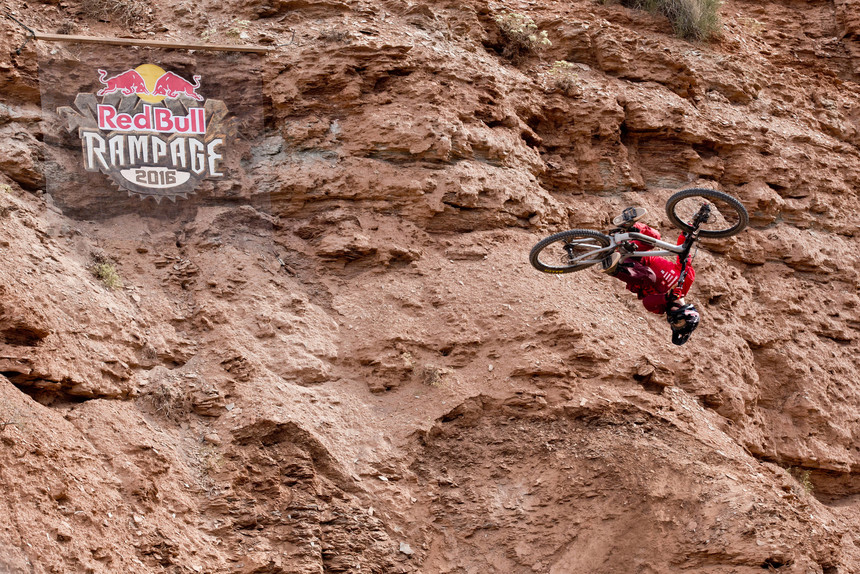 Semenuk on one of many backflips. Redbull photo.

Semenuk’s run was so smooth; three backflips and one flat spin 360 onto a step-up with beautiful laser-accurate landing got him an 84.33 score that ended up being untouchable. His line and execution was definitely a perfect combination of speed, flow, lines and tricks. 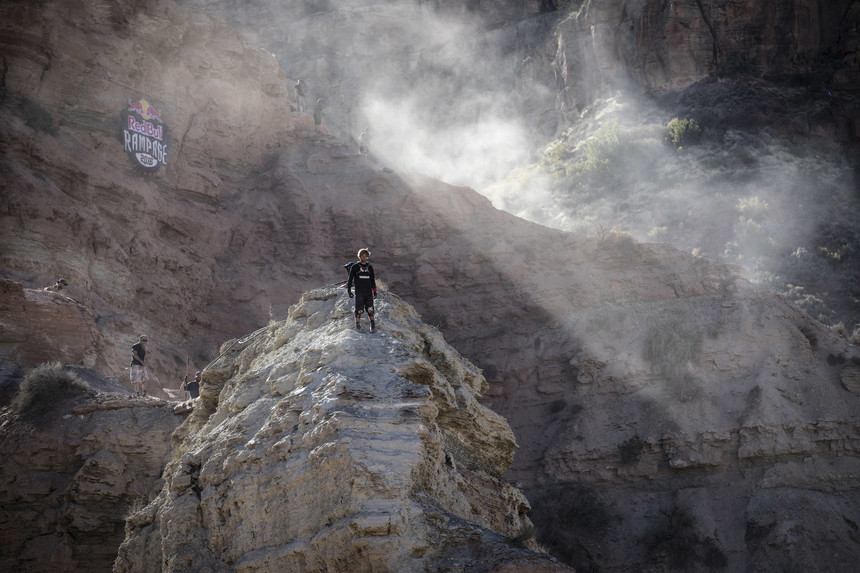 Bizet spent a lot of time looking and waiting on the wind. But delivered like crazy once he dropped in. Redbull photo.

Antoine Bizet with the double backflip!!! First one at any Rampage ever. Not to mention it came just after pulling a step-down backflip with massive amplitutde. Holy crap. 81? Just 81? Still, that was amazing. 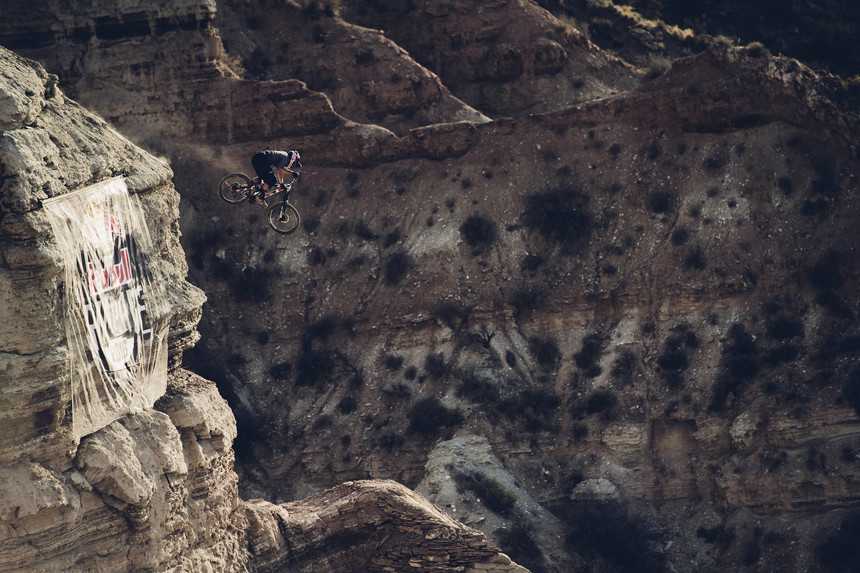 Young gun American Carson Storch's 79 on his first run came from a series of cool 360 step-downs, which put him into third. The run seemed more about speed and flow than any trick to me, but he did take home the best trick award for that one drop. 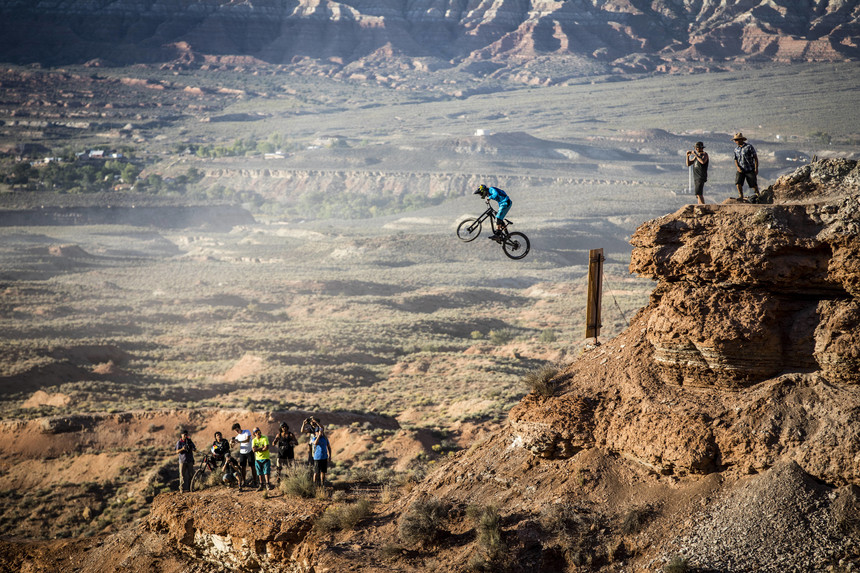 Kurt Sorge’s drops looked huge and fast. His execution was really clean and got him fourth place with a 78.66. There was one nice backflip at the very bottom. Basically a toss-up between him and Storch. 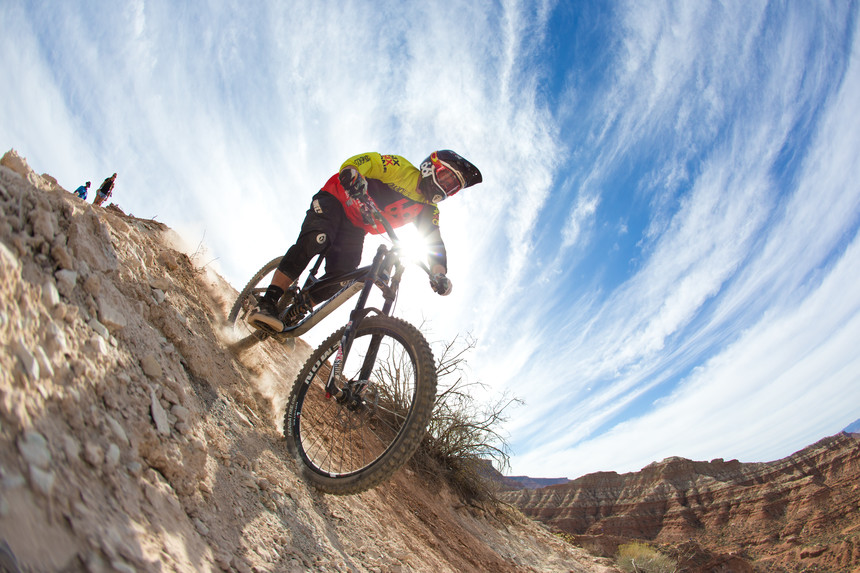 Kyle Straight brought it all and if he'd not crashed on his 2nd run, it would've been close. Redbull photo.

Kyle Straight also had a decent first run with one step-down backflip. Not 100% sure it beat T-Mac’s run but he was fast, ballsy and ended up with a 78.33. Maybe a little generous, but he deserves it. 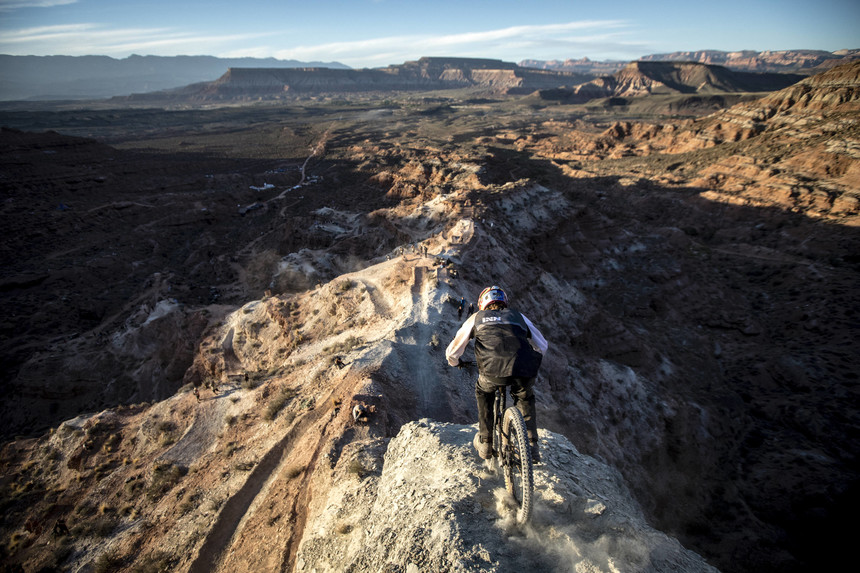 Thomas Genon, the Belgian rider, had a super smooth first run to put him in fourth. Not that this was outta nowhere, but nice to see someone beat expectations. 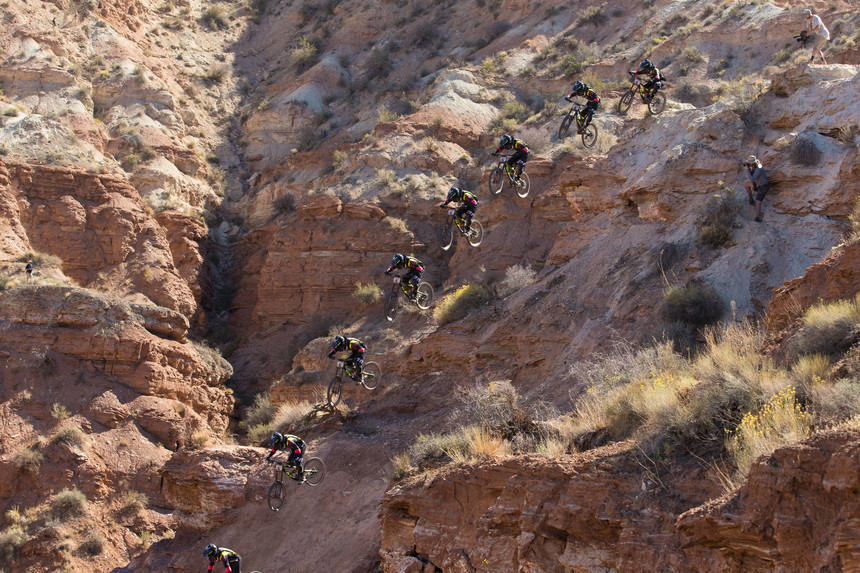 Tyler McCaul had what I thought was a phenomenal, gutsy and technical run. It got a 76, which I thought might have been a little under-appreciated given how great it was. But what do I know? He's an emotional favorite and he went off early in the field, which might have colored my opinion.

Cam Zink’s run looked fast and cool, until it literally got sideways. He crashed after his massive 360 step-down got over-rotated and, interestingly, he seemed to stop his skid just where his wife and daughter were hanging out.

Lacondeguy’s flat spin 440 off a hip jump was impressive, his speed and slightly different riding style on some bigger features was also interesting. His run put him at 75 and change. He’s so speedy, so smooth and so comfortable, he's a pleasure to watch.

Graham Agassiz went out hard, was having a great run and then broke his hip (according to Zink in his interview) on a crash, unfortunately. Our best wishes for a speedy recovery.

My only real beef was the bandwidth issues that the broadcast was having. 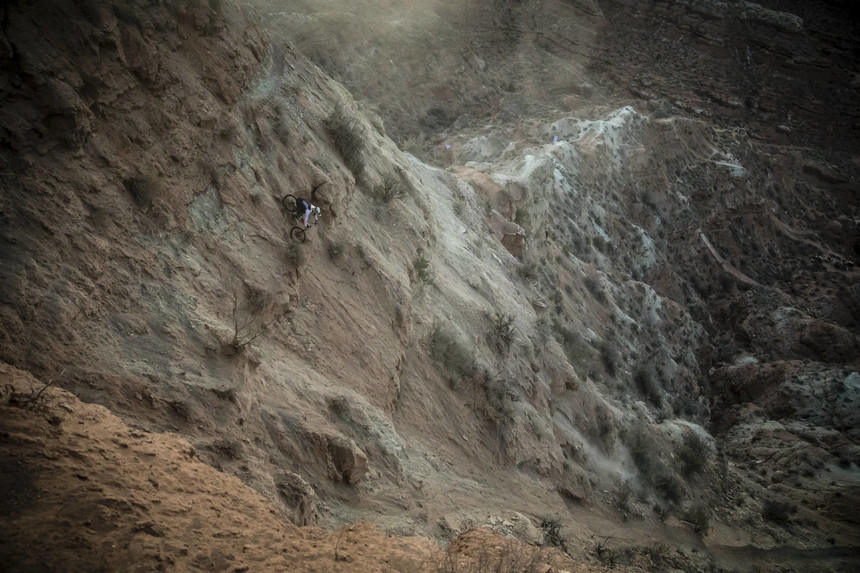 James Doerfling's Run was one of the few that dropped straight into the cliff. Redbull photo.

Berrecloth’s second run had a live gopro feed. It didn’t really transmit great but, UCI and TdF are you paying attention?

Berrecloch and T-Mac had wind issues and couldn’t finish their second runs. It's been the norm over the last few years for the wind to play a major issue later in the afternoon. And that happened again today.

Actually a lot of crash-outs, opt-outs and wind issues for guys going for it on the 2nd run. Props to those who had the guts to make the 2nd attempt at all.

Pierre Edward Ferry's backflip dismount was amazing. Thankfully his bike didn't land right on top of him after he decided to leave the trick while fully upside down. 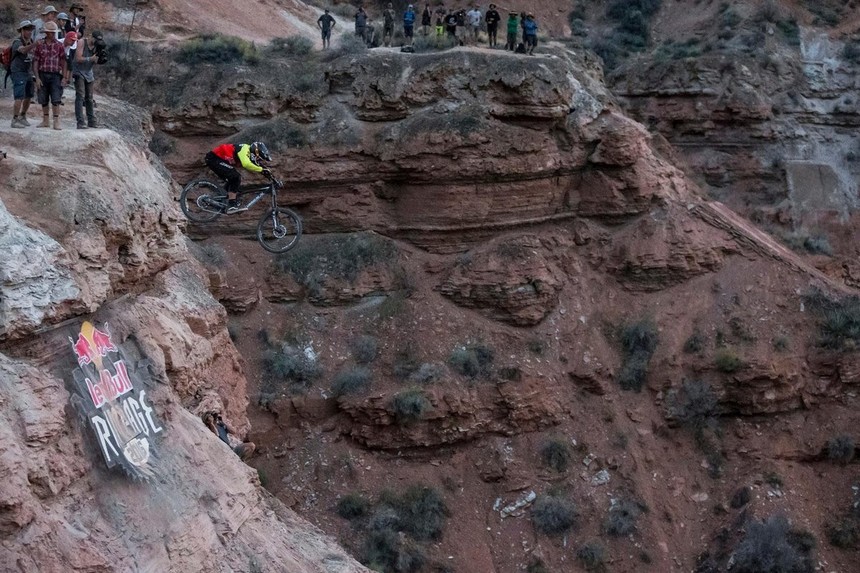 Straight's 2nd run was all that, until he came off. Redbull photo.

Kyle Straight's 2nd run was shaping up to be frickin' amazing. Threw a suicide ho hander off an epic middle drop. Landed his step down flip better than his first run, but hit just a little too hard which led to a washout. Respect for the big show on second run. Even though he didn't finish it, his 2nd run actually gave legitimacy to his score on the first. 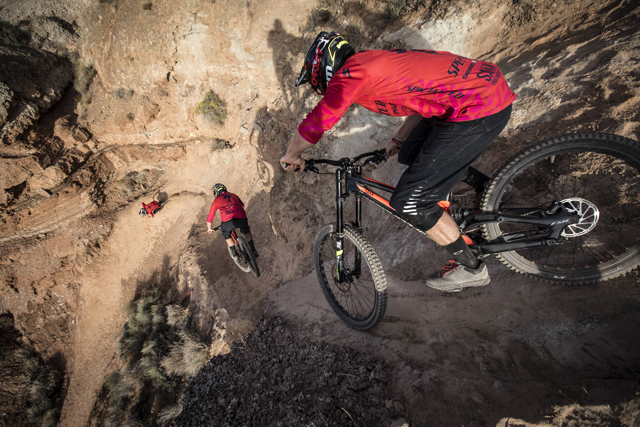 Lacondeguy's second run kept him in the same place, but his no-foot can can into superman was kinda awesome.

Can someone talk some sense into Connor Macfarlane? Love the gumption, but someone who crashed so often and so hard that his face looks like it was beaten with a lead pipe shouldn't be riding. Lets have someone with medical expertise make the call on whether riders can go or not. Glad he won the Kelly McGarry spirit award, though. 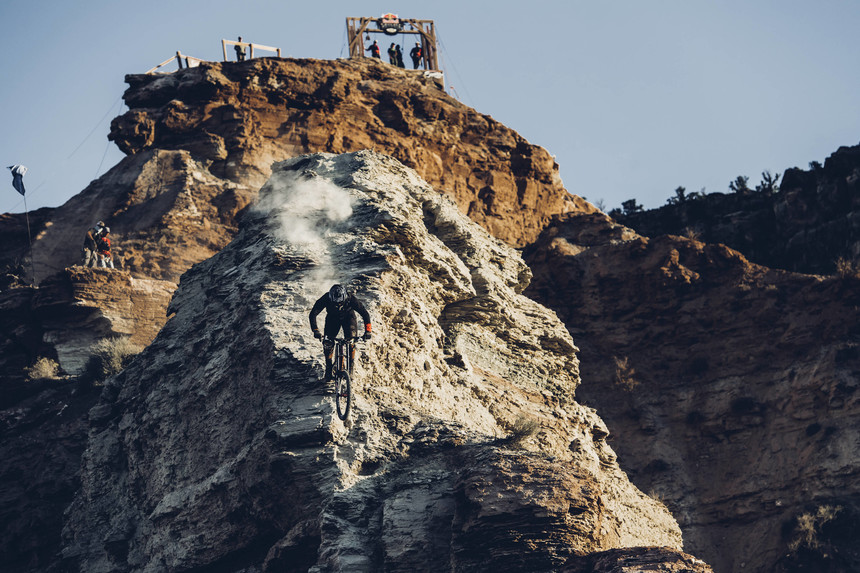 Bizet's second run was also riveting, but didn't quite score up to his first. Redbull photo.

Antoine Bizet had a great 2nd run, no double backflip, but added a suicide no hander and added another backflip on the final stepdown. Bit of tension builder at the finish corral, but didn't quite get it better than the 84 needed for the win.

Congrats to Brandon on the victory, making him one of only three two-time winners of the event (Strait and Sorge), AND his 2nd people's choice award in as many years. You can watch the replay and all the runs here.