Aspiring Bike Jedi? Here's 7 Tips On How To Bring The Force To Your Trail Riding

It doesn't take long to recognize how differently Santa Cruz's Jeff Kendall-Weed attacks a trail than almost anyone else. Instead of straightlining the trail at full speed, drifting corners and hunting for the fastest line–which Jeff can also do very well–he's going left and right popping off of rocks, trees, and lines you never realized were there.

The two videos that have come out in the past year from T-Bar Films have been some of our favorite bike edits to watch, as they simply follow Jeff around as he nose manuals down granite ledges, hovers on his back wheel for what seems like forever, and bunny hops and boosts jumps high enough to hit the tree branches above him. 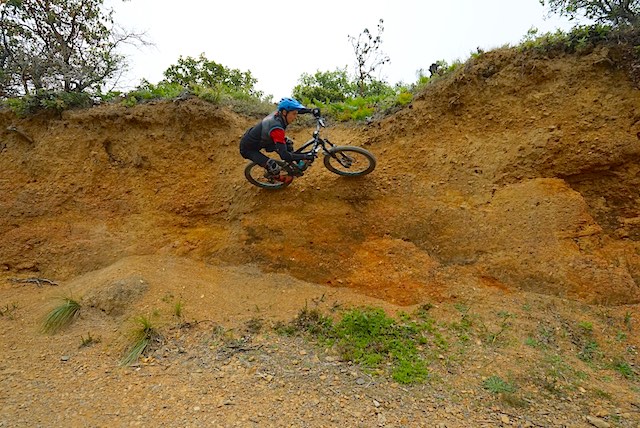 "It surprises me, peoples’ reactions some times [to my riding]," Jeff said in our interview with him. "I like to feel like I got the most out of the trail and ride as fast as possible. But sometimes people want to ride behind me and watch me ride instead of hauling ass themselves, which always surprises me." With such a distinct and entertaining style, it doesn't surprise us a damn bit that people would want to take the opportunity to watch Jeff's riding in person.

In order to be able to bring a bit of Jeff's bike skills to your own riding, we sat down with Jeff–who now works full time managing international sales for Wilderness Trail Bicycles–to learn how he developed his style and his Jedi Master-level manuals, boosts, and bunny hops.

#1: Lose Your Racing Mindset On the Trail 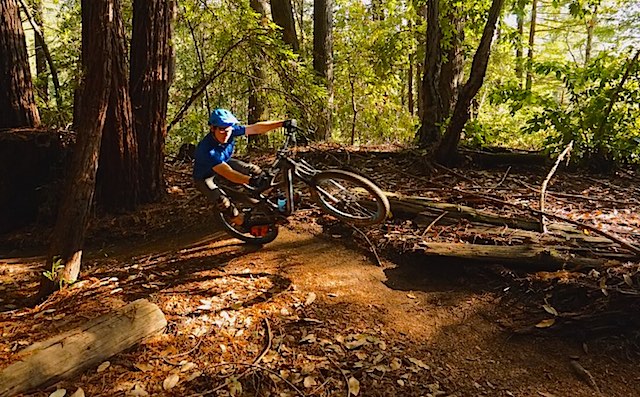 If all you're going for is speed on the trail, you'll never have the chance to spot the fun lines along the way. Jamie Busch photo.

I do race some enduros, but the videos you see–that’s sort of how I ride. Racing legitimizes everything you do, because clearly you’re training and taking it seriously. But if you don’t have a goal in mind, you have more freedom. I usually just find the gnarliest trail I can and just lap it. If you’re trying to train for races, you’re going to straightline all the corners and miss half the fun. You gotta have a different mentality in order to develop some of these freestyle skills. 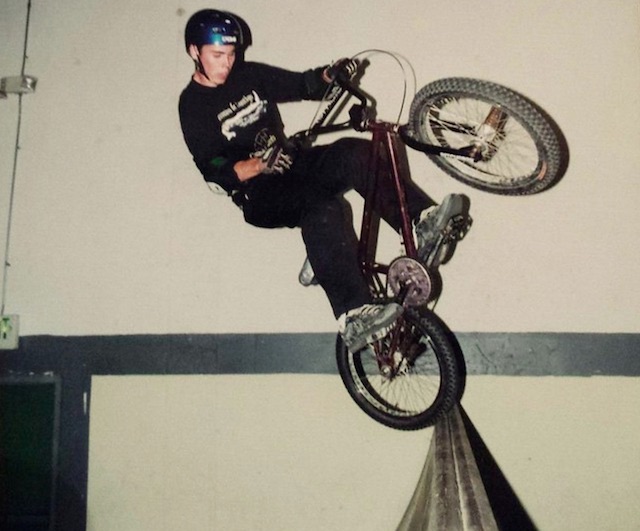 Spending hours everyday on a BMX bike as a kid gave Jeff the base skills to jib the shit out of sidehits as a grown man on a mountain bike. Jamie Busch photo.

I rode a lot of BMX growing up, since BMX bikes are so cheap and feel right size-wise when you’re a kid. I was able to spend so much time practicing stuff, and then repeating it over and over on bigger and bigger obstacles. When you have more time in high school and as a kid, you can practice over and over.

The BMX is such a base skill teacher because it’s so hard to ride that bike. You’re standing up and riding more aggressively, and your balance point is a lot narrower. You don’t have the forgiveness of larger wheels and a larger contact spot, so you’re going to crash a lot sooner than on a mountain bike. You’re going to learn a lot riding BMX.

That being said, there’s a lot of folks now that hit these side lines that don’t come from a BMX background. When I grew up, freeriding on moutain bikes didn’t exist. The whole slopestyle scene didn’t start util the early to mid 2000’s. You had to ride BMX if you were going to be doing anything like that on a bike. Now, all that exists in mountain biking, so you don’t have to have that background.

#3: Flat Pedals Will Help you Get a Better Feel For Your Bike 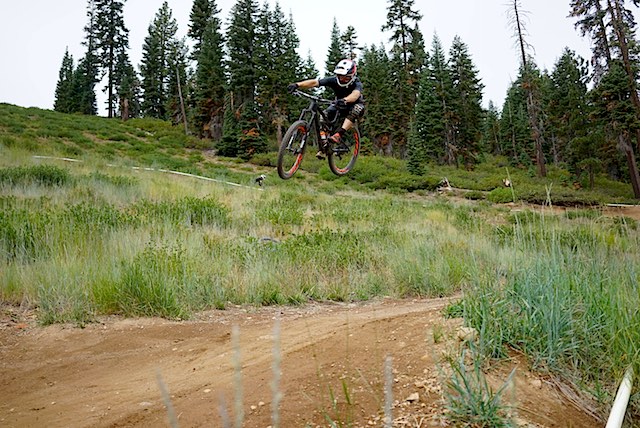 Jeff rides on flat pedals for much of the winter to get a better feel for the bike before clipping for the summer. Brian Butler photo.

I did a quarter of the Tahoe video on flat pedals. I ride a lot of flat pedals in the wintertime, because it teaches you a lot more about your bike and you can get away with that much more in a corner, because you can dab your foot much more easily. It does suck going fast on flats, though, which is why 95% of people are going to be clipped in. It’s just nice when you can charge through rough stuff and not get bounced off your bike. I just moved to Marin, where it’s really rocky, and I don’t want to die, so I mostly clip in now.

#4: Nose Manuals Start on the Street

Jeff spent years trying nose manuals and getting comfortable with his front brake on the street before going for moves like this. T-Bar Films photo.

The nose manuals I was doing in the Tahoe video were kind of half-assed because I'm using my front brake a lot to balance. You can’t really do it without using front brake on today's mountain bikes due to the slack head angles. Just practice on the street–you have to figure out how far you can do it for, then try doing that much on the trail once you've mastered it on the sidewalk. Then you ask yourself "Can I get twice as far?"

But like all this stuff, it takes a lot of practice. For years and years and years, I was practicing them down the street; I don’t learn things very quickly. When I was 12, I was trying to learn those in the driveways, and I flipped over the bars into the gravel driveway and meat-pawed the driveway and got my hands super torn up before having to jump on the schoolbus. It takes a few of those crashes to figure out how to do it.

I rode by that tree I bunny hopped in that Santa Cruz video almost every day, but it wasn't until I was stuck riding behind someone a bit slower that I thought to jump over it. When you're behind someone slower, that happens–you look around and try and find different lines. I ride a lot of dirt bikes, and you always take a different line from person in front of you in case they crash.

I was also pretty dorky as a kid–I built a bunny hop stand with a pipe and spent hours seeing how high I could bunny hop over it without knocking the pipe off. I did drills, over and over, for hours as a kid.

#6: Practice for 10 Minutes Every Day 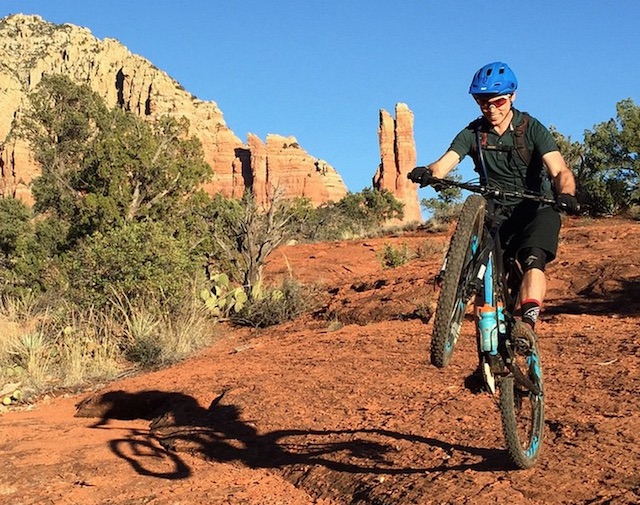 "Just about every time I'm on my bike, I'm doing wheelies." Jeff Kendall-Weed photo via Instagram.

More important than going out and hammering big sessions on the pump track trying to learn these tricks is just practicing this stuff for a few minutes every day. Just about every time I’m on my bike, I’m doing wheelies. If I didn’t have a full time job, I’d be practicing them everyday for 30 minutes.

Practice trackstands, bunny hops, and wheelies for ten minutes a day, every day. What really helps your skills build up are everyday repetitions.

#7: It has nothing to do with the terrain around you 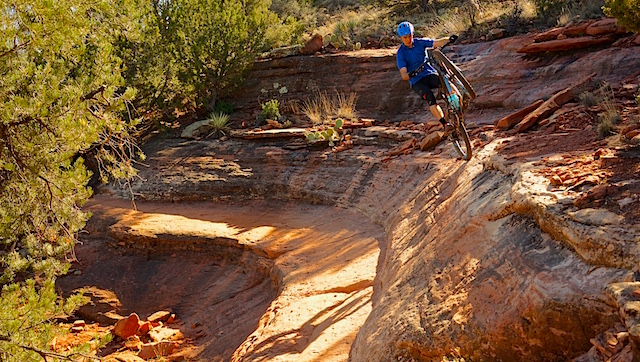 Having a natural skatepark as your home trails–like this one in Sedona–might help you get creative, but it's more about your mentality than your terrain. Jamie Busch photo.

I’ve ridden in a lot of places, and how you're able to ride and whether or not you're able to incorporate different styles in your riding is not so much about the terrain–it’s a mentality, because if you don’t have the terrain you want, you can build it.

It matters more who you ride with and what their approach is. You go to Florida, and it’s flat with a bunch of quarries and roots, and you have people absolutely shredding there with the tight, twisty, rooty trails.