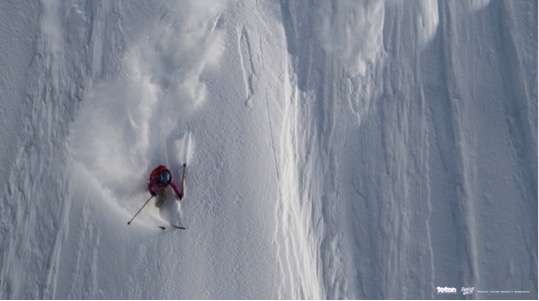 When September rolls around and the mountains receive their first dusting of snow, the International Freeski Film Festival (iF3) quickly reminds of the upcoming season. Last night in Montreal, we were honored to have Paradise Waits nominated for Best Cinematography, to see Angel Collinson receive the well-deserved award of Best Female Freeride Performance and For Lack of Better being awarded Best Storytelling. 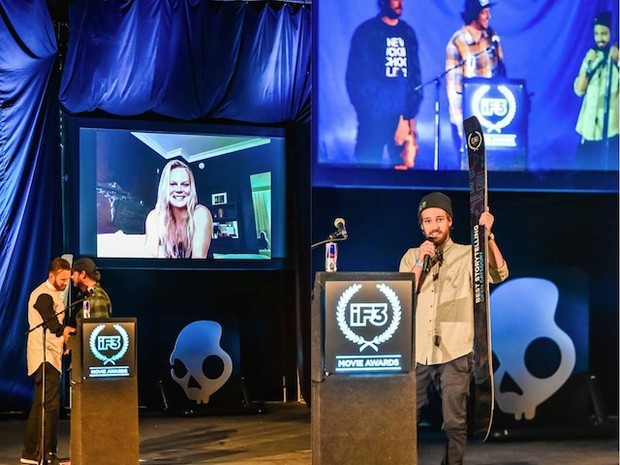 Collinson, at home in Salt Lake City was patched into the award ceremony to accept her award, while Clayton was on hand to accept For Lack of Better's win in the Best Storytelling category. iF3 photo.

Last Year Collinson won Best Female Performance at the Powder Awards for her opening segment in Almost Ablaze. This year she closes Paradise Waits with her aggressive, no-nonsense attack of the fall line, while her fun-loving personality offers some fanatic relief to what some consider the worst ski season on record.

Directed by Clayton Vila and produced by Clayton and TGR, For Lack of Better, tells a gripping story of top-tier street skiers Clayton, Sean Jordan and Cam Riley, as they discover some of the best skiing of 2015, ironically, in Boston, Massachusetts. Driven by reasons of personal satisfaction and career progression, they are notorious for creating the best possible video segments every year.

Clayton is no stranger to being recognized as a street skier; in 2013 Vila was awarded Best Jib at the Powder Awards for a massive step-up rainbow rail in the streets to close his segment in the The Eighty Six. The feature was an enormous rainbow rail 20 feet off the ground in the middle of a Denver park, but as impressive as the feature was, it was Vila's smooth style and confident 270 out that sealed the deal in the eyes of the Powder Awards panel. We'll be releasing the film on iTunes mid November 2015.