7 Race Tips To Help You Crush Your Group Rides 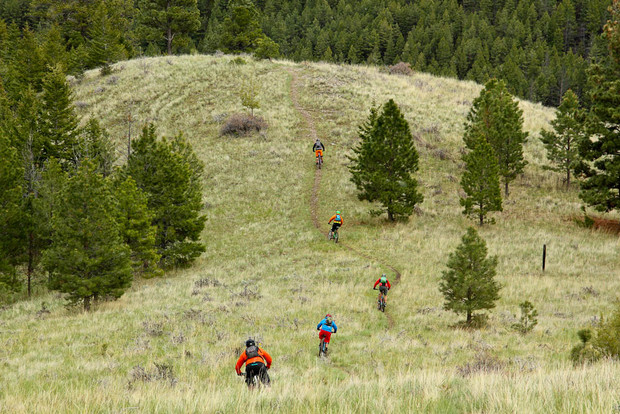 Using the friendly competition of a group ride is a great way to step up your game. Ryan Dunfee photo.

Mountain bike racers have picked apart and optimized every part of a ride to help them win. From training to equipment to strategy to nutrition. Some of it gets a bit crazy—helium tire inflation and, umm... motors—but many great tips have come out of that OCD attention. Below are a few to help you get more satisfaction and enjoyment out of that average group or trail ride. Because hey, fast is fun! 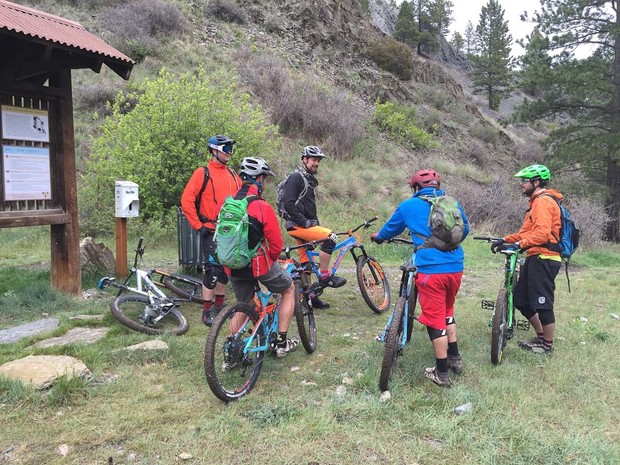 "Anyone else just have four tacos??" Don't do it. Eat a few hours ahead. Ryan Dunfee photo.

The purpose of a pre-ride meal is to top off liver glycogen stores your body has expended during a night’s sleep (we’re presuming your ride is morning or early afternoon). A light meal (200-400 calories) of complex carbs and some protein three or even four hours prior to your ride sets you up best for that group pedal.

Some athletes with stronger stomachs or high metabolism can shorten this time a bit, but you never want to be choking down a burger or stack of pancakes right before a ride. Eating spikes blood sugar, and will reduce performance. After three hours, insulin and blood glucose normalize and hormonal balance is restored.

After you eat, drink 10-12 ounces of fluid each hour up to 30 minutes prior to the start of your ride. You want to start properly hydrated, both to keep your riding strong and to reduce the amount of water you have to carry. 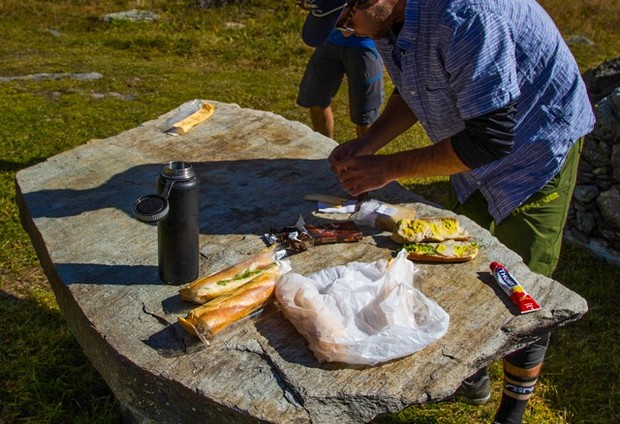 Eating right before a ride will spike your blood sugar, and will knock down your performance. Ryan Dunfee photo.

It’s important to note that, even if you feel hungry, being hungry is not a performance inhibitor. If you MUST eat something, keep it to 100-200 calories.

If your ride is very early, DON’T get up at 5 am and sacrifice sleep just to eat. If you‘ve been replenishing carbohydrates immediately after each exercise session, you have approximately 60-90 minutes of muscle glycogen stored up for use regardless. As long as you begin fueling shortly after the ride begins, perhaps 10-20 minutes after you start, your performance will not be affected. 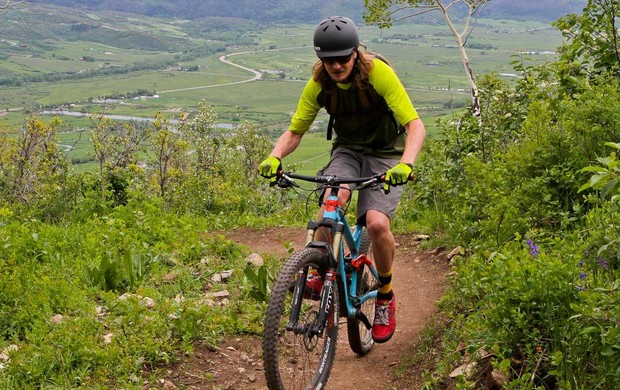 Smooth and steady is fast out there. Ryan Dunfee photo.

Sometimes a tough mash is unavoidable, and can even be fun, but try to get into the habit of laying down power in a smooth, steady stream. As an added bonus, smooth pedal strokes also help prevent injury. 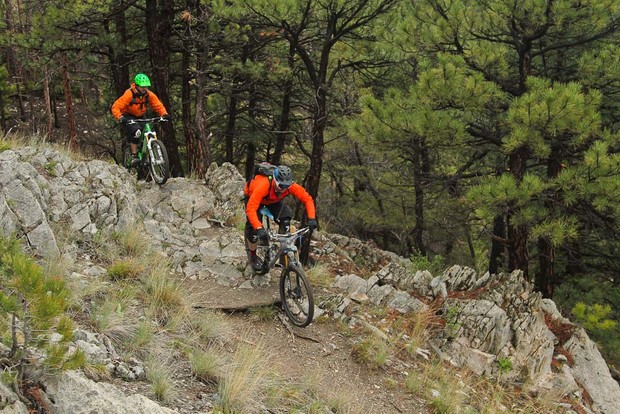 Stand up and attack when those hills or technical sections pop up. Ryan Dunfee photo.

Sometimes we’ll approach a tough section or long climb with a mental step back–“Oh geez, here it is, THAT section”–and you subconsciously, or consciously, sacrifice momentum by slowing down or backing off the pedaling. Rubbish. Hit that shit. Hard!

Up your mental game and challenge those sections of trail. We all know momentum is our friend, but when faced with an ugly-looking technical problem or hard effort, we can forget. Make a note of when these moments happen and train yourself to have it trigger a bit of positive aggression.

Don’t go charging into shit you don’t know, though; that’s just dumb. But when you know there’s something coming, and you feel that moment of apprehension building, engage in some positive self-talk ('you GOT this'), put some power down, get that body position aggressive and let those wheels and suspension cruise over whatever it is.

Once you’ve beat that section into submission a few times, you’ll feel great about it. And hopefully that trigger reaction sticks around.

#4: Just because it’s not a race, doesn't mean you're not racing 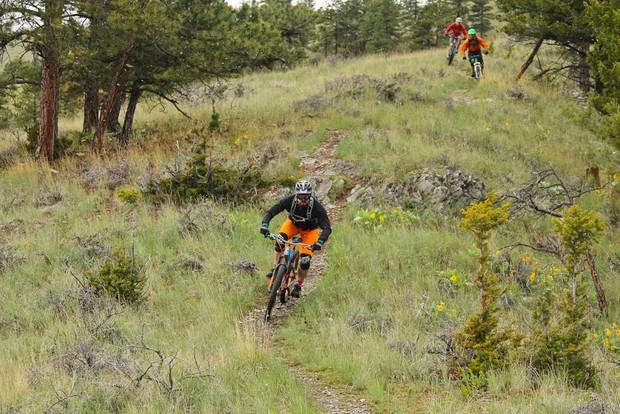 Looking to race? Group rides are a great way to practice passing and other race techniques. Ryan Dunfee photo.

Pass. Not like a jerk and not on downhills—make sure you wait for a safe, quality opportunity and let your buddy know you’re going around—then get on the gas and make it quick.

Sometimes it helps to clarify you want to ride like this in the parking lot. “I’m working on passing… we all okay with passing safely on this ride?” Establish a proper format, i.e. "Rider Up!" or "Can I pass?" for the passer. If you're the one getting passed, maybe the response is "There's a spot in 20 yards, go for it there on my left."

Passing should always be a mutually respectful moment between two riders, on a ride or in a race. If someone is behind you who wants to go but you feel the track is too narrow and you’re not comfortable, you don’t have to let them by until you feel safe. And communicate this. But move over as quickly as possible. 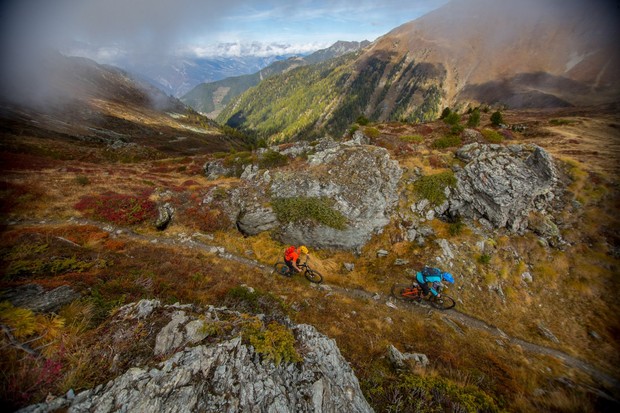 Always wait for a safe spot to pass, and stop at those intersections. Ryan Dunfee photo.

If I’m faster on downs, I’ll try to pass to be near the front before a section I know I can crush. My buddy who climbs like a helium balloon will then go around me on, or just before, those long suffering ups. But passing takes a lot of anaerobic effort; you only have so many matches to burn, so choose your spots wisely.

I’m never a fan of groups where everybody rides like a bunch of camels in a line. However, don’t go dropping people and disappearing, then they’ll have to look for you. Wait at intersections for the group to catch up. If people want to leave the group off the front or the back, make sure that’s clear.

Also, if the group has stopped to break at a certain intersection, or for a snack, I’ve always felt it’s fair to begin again in that same order. Unless you’re about to charge into a section where someone knows the line better, then it’s okay. Or if I happen to be in front, but we’re starting up a hill someone else will crush, then it makes sense to let him go first.

#5: Keep hydrated and have some BCAAs and electrolytes during the ride 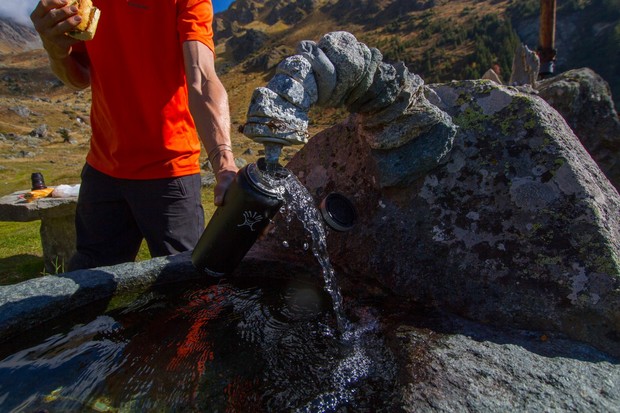 You might need more than water if you're headed out for more than 90 minutes. Ryan Dunfee photo.

You want to feel good from beginning to end, leg muscles aside. Make sure you take as much water as is necessary. If you’re running a bottle and going on a long, or hot, ride, add some BCAAs (leucine, isoleucine, and valine) and electrolytes (Sodium, potassium, calcium) to replenish after an hour or 90 minutes of effort. I avoid putting anything other than straight water in my hydration pack, because it can get funky quick, but a small bike bottle with the other stuff works well. Start sipping off it after an hour.

Don’t eat anything complex or with too much protein during a ride. That will knot your stomach. The trail doesn’t get easier after an hour, so avoid bonking. Nothing feels worse than not having the gas to get over stuff you can usually nail. 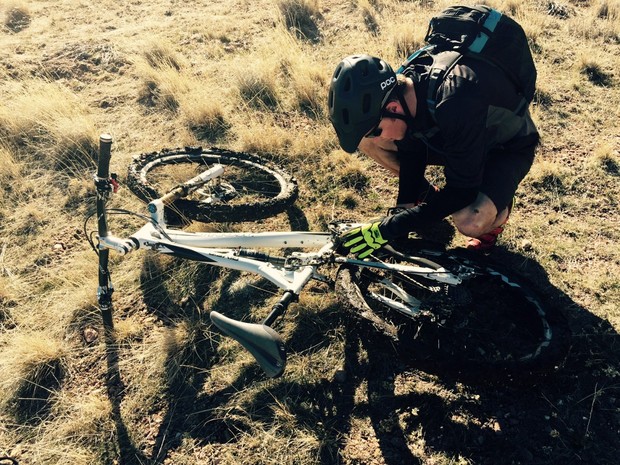 What do you really need to bring with you to save the day out there? Ryan Dunfee photo.

One time I dinged a brake rotor on a ride, so I carried a rotor fork for several months, just in case. That was stupid. Figure out how little you can safely get away with. Will you really eat three gels on a ride? If you’ve checked your shock and fork pressure recently, do you really need a shock pump? Don’t leave the multi-tool or the tube (and C02) behind, but start to get an idea of what you need, and what might be adding weight to make you slower. In the parking lot, if three other guys on the ride are carrying a pump, you might be able to leave yours in the car. I have a big, strong friend who carries cans of beer on a ride. I love him, but that's not me. 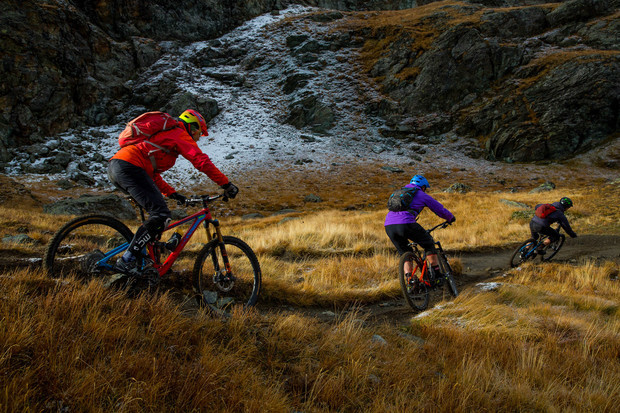 Eek everything you can out of the full ride. It's fine if not everyone is on the same page as you. Ryan Dunfee photo.

The last half mile or so, push rather than cruise. Many group rides end with a leisurely climb or a less-than-committed descent to the parking lot.

You can take this opportunity to empty the tank. Visualize someone breathing down your neck (it used to be Lance) and finish ahead of them. It doesn’t hurt anyone. Maybe one of your buddies actually likes to race for just that last bit. It can be fun.

And make sure you re-supply your muscle glycogen by eating a good recovery meal (ideally within 20 minutes) after your workouts. I put a couple scoops of protein powder, BCAAs and some carbs into a shaker cup and consume it right after I stop my GPS.

Finally, know that not everyone thinks about group rides this way. Some folks just want to get out and pedal around and fast means nothing to them. That's fine; don't hold it against them and don't make them bike like you. I'm sure they won't hold a little speed-deamoning against you either. You'll all be comparing notes in the parking lot over beers at the end anyway.